2014: The Year The Stupidest Man On The Internet Handed Off His Aluminum Crown 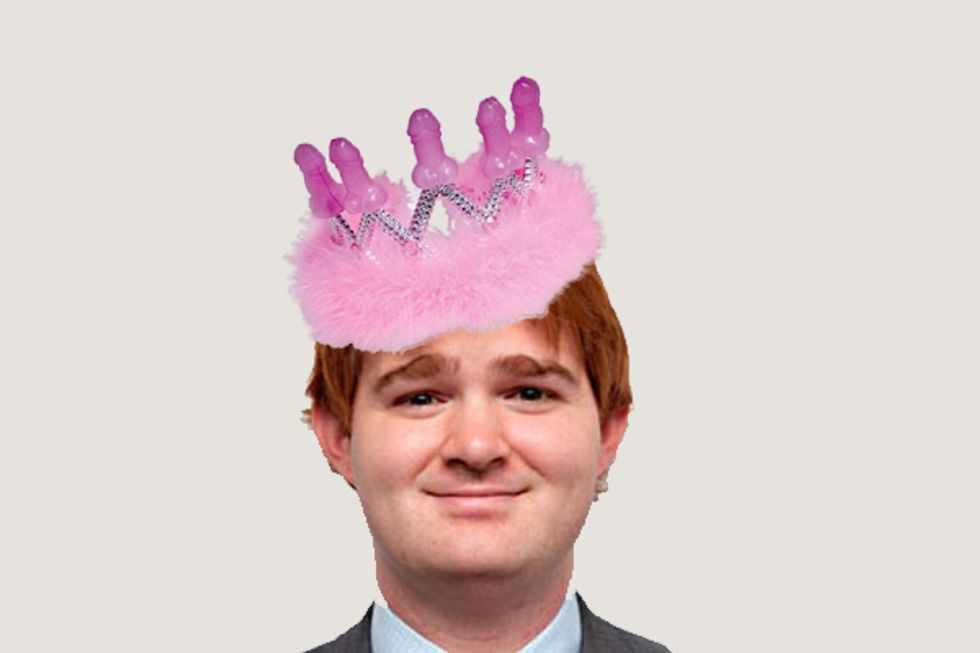 For years -- eons! geologic ages! -- Jim Hoft reigned supreme over our fair land, a man of spite and viciousness who never saw something he couldn't fuck up. (Though he saw many things he couldn't pay the fuck up.) But once he abdicated his throne to become president of the Stormfront Junior Auxiliary, it was time to crown a new king of stupid.

Sadly for those who would have had to fight it out with caps-lock and spittle, one man was so obvious an heir, so easily did he pull his keyboard from the stone, that all other pretenders backed away, tongues sheathed and heads hanging. That man was Award-Winning Journalist Chuck C. Johnson, and sweet Jesus Christ, this guy! He is what would happen if Hoft wasn't just playing dumb (FYI, we have met Hoft, and he is just playing dumb; he knows perfectly well he's lying all the way to the bank) but was actually mentally challenged.

Let's swoosh back in time -- WAVY LINES! WAVY LINES! -- to when we first made the glorious acquaintance of the heir to Hoft's tin-can-and-garbage throne. It seems to have been ... in October of 2013? Were we really so early on the hot tip of human tire fire Chuck C. Johnson? WE WERE! That's when we noticed a hilariously wrong (pro-tip: keep your eyes peeled for what lit majors call a "recurring theme"!) story about our boyfriend, New Jersey Senator Cory Booker (D-Awwww Yeeeah). Get ready for some blockquote!

So the Daily Caller has this scoop, where they go around and look in Cory Booker’s windows and declare the home vacant. And then they are all Zoolander male model style, “AHA! He says he lives here but property records show that it is owned by some lady!” And then Buzzfeed is all, “Earth to Daily Caller, that lady was the landlady and here are some rent checks, and also possibly go to this other home in Newark Cory Booker moved to in late September!” and the Booker campaign was all “orange mocha frappuccino!” And now it is a big spitty mess because the Buzzfeed story declared the neighbors who said Cory Booker didn’t even live there to be “anti-Booker activists” and got one of their names wrong, and then the Daily Caller was all, “AHA Earth to Buzzfeed nice reporting!” and Buzzfeed was all, “Oh okay, here is a correction on the lady’s name,” and the moral of the story is Cory Booker is the worst human being since Josef Mengele gave birth to Nazi Barack Obama.

The real moral of this story, of course, is that Wonkette bloggers should always tag the name of the author of whatever stupid Daily Caller story we are mocking, or we would not even know that was Chuck C. Johnson, because we didn't mention it!

He wrote something else stupid, of course, which we talked about in that same post:

In the story “Newark Activists Say Booker Fire Rescue Story All Wet,” which we happened to follow straight from that first one about how Cory Booker is a carpetbagger who lies about his residency and apparently lives in New York, the activist neighbors believe based on no firsthand information whatsoever, it turns out, and you are not going to believe this, a) Cory Booker did not even rescue that lady from that fire, and b) and this is the terrible part, really, be ready, b)

On Twitter, Booker claims credit as a local Mr. Fixit, with stories that rarely stand up to scrutiny. (Related: Cory Booker breaks promise to help woman with raccoon infestation)

Spoiler: CORY BOOKER DID NOT HELP A LADY WITH HER RACOON INFESTATION. The end. OR IS IT? IT IS NOT! Let's come unstuck in time to July of this year, when next we noticed Chuck C. Johnson.

It was the halcyon days of Thad Cochran's re-election campaign as senator from Mississippi, and some goodly folk were jes' doin' what journalists do: sneaking into the rest home where Cochran's wife had long been suffering from early onset dementia (that is sad, you guys), and taking pictures of her in her hospital bed to prove ... something nefarious about Thad Cochran we guess. It was great! (It was not great.) Chuck C. Johnson? He was balls-deep in it, offering to buy up the photos of the ill, elderly woman, so he could publish them without anyone's consent -- though, sadly, back then we were still paying attention to Ghost Andrew Breitbart lackey and toadstool Matthew Boyle instead of the illustrious Johnson, and did not yet give him his due.

But time marched on, and we could no longer blithely ignore the contributions to civilization and society of our boy-king, Chuck C. Johnson, seeing as how he was just racisming all over the Cochran race. (Johnson, duh, was a supporter of Cochran's primary opponent for the Republican nomination, teabagger Chris McDaniel, who still hasn't, to our knowledge, conceded).

Where there is post-racial America, there is Chuck C. Johnson, award-winning journalist.

Not to brag, but you know who ELSE is an award-winning journalist? ME! That's who! I have won all kinds of awards n shit from the Association of Alternative Newsweeklies and EVEN the Orange County (CA) Press Club, like "Best Political Columnist" and "Best Sports Story" and "Totally Prettiest Yuh Huh Shut Up," and we all know how that worked out for me. (Poorly. It worked out poorly for me. I am almost as bad at journalism as Chuck C. Johnson!)

Chuck C. Johnson went on to get many, many, many more things wrong this year, but we are a little tired of ctrl-v'ing at you, so we'll just hit some highlights:

And that is Chuck C. Johnson for ya. If he wrote a story, it's guaranteed to be not only wrong in both details and premise, it's also certain to be morally icky while patting itself on the back for BREAKING! (wrong and incorrect) news. Once is blogging. Twice is ... blogging. All the times, and you get crowned. Viserys-style!

(Don't do that, it's against the rules.)