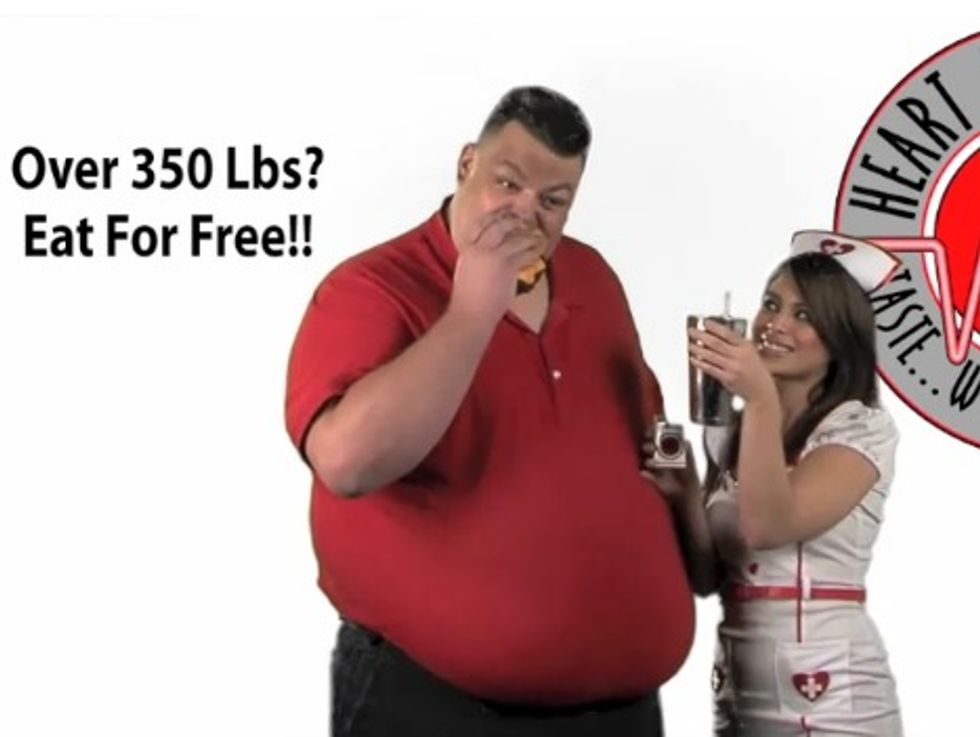 It seems we're working on an"ArizonaTrilogy" today, as part of "Trilogy Week" here at Wonkette. (Yesterday was "Americans Unleash Vile Hate On American Muslims" day. Did you enjoy that?) Anyway, the third of our Arizona Stories today concerns 575-pound Blair River, a shockingly fat person who occasionally worked as the spokesmodel for the "Heart Attack Grill," an Arizona eatery dedicated to producing the vilest vats of pure grease and fat and sodium available anywhere. Imagine, you are an alleged human and you live in Arizona and you're surrounded by the Arizona slob architecture of Pizza Hut/Applebee's/Jack In the Box and you think, "What Arizona needs most is a restaurant that would aggressively serve even more disgusting piles of poisonous shit." And then you find a morbidly obese person who is literally committing suicide in his 20s, with his insatiable appetite, and you turn him into a video joke/promotion for your restaurant. Anyway, the guy is dead "of pneumonia" at age 29. Congratulations, everyone.

From the Seattle PI:

Go to the website of the Heart Attack Grill, and you’ll see a video of Blair River, tossing away a pair of pants that don’t fit, having his waist measured and chomping down on a huge burger.

It was all for fun to promote the Chandler, Ariz., restaurant that sells huge burgers and french fries cooked in lard and celebrates the wretched excess that is the worst of the American diet.

It’s not so funny today. River, 6 foot 8 inches tall and weighing 575 pounds, is dead at age 29, the Arizona Republic reports.

What the hell is wrong with this country? [Seattle PI/The Awl]