A Brief Intermission To Yell At You About Bagels 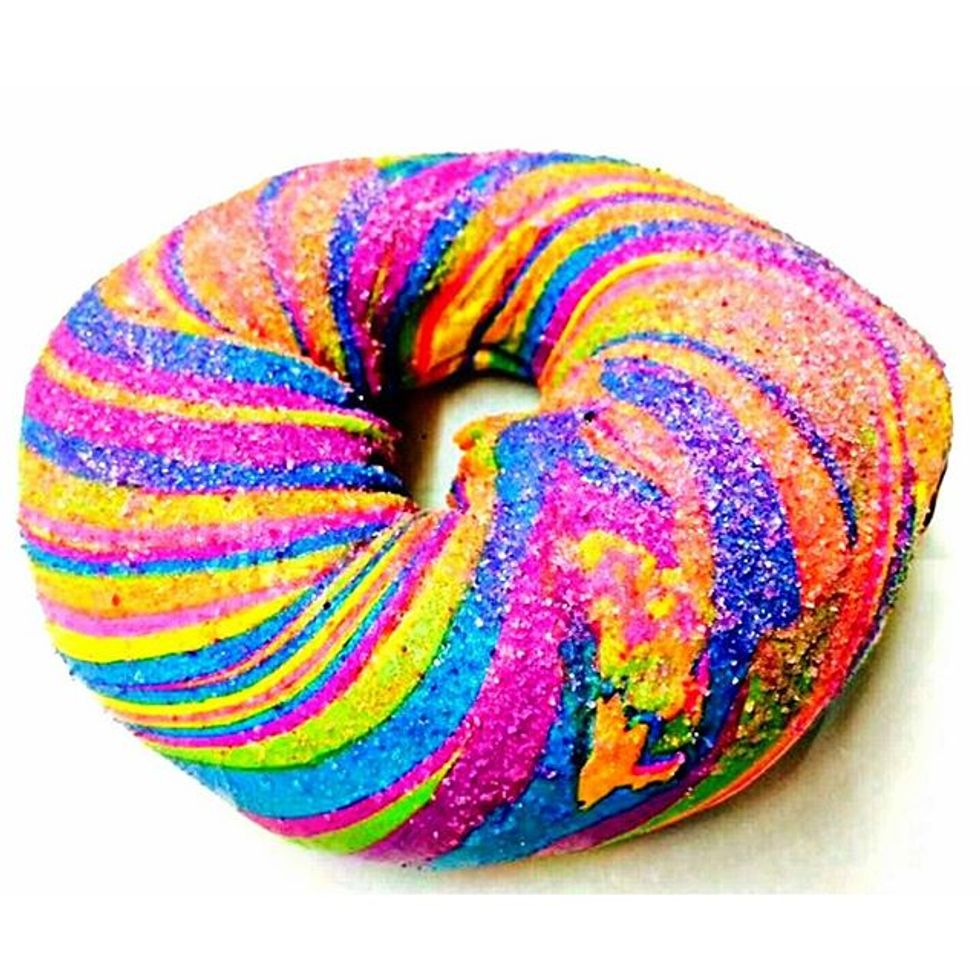 This is us, for real

This is not a bagel. This abomination, this dis-gusting acid-tripped creation that is bready and round and has a hole in it? It is not -- no way, nope, no how -- a bagel. Let's be clear about that.

Rainbow Bagels – the name is trademarked – became a massive hit in New York after Jonathan Cheban, a friend of Kim Kardashian, shared pictures of his purchase on Snapchat. They are credited to baker Scot Rossillo, the self-described “World’s premier bagel artist”, whose CV also includes the invention of the cragel, a croissant-bagel hybrid.

First of all, no. Second of all, HELL FUCKING NO. No to the douchebraid who calls himself a "bagel artist," and definitely no to any so-called "bagel" that uses the word "Kardashian" to explain it, and for sure positively extra NO!!! to anyone who thinks there is such a thing as a "croissant-bagel hybrid," because there is not, and can never be. That is WRONG and BAD and violates all the rules of nature and God and man and baking and bagels and the Bible and the Codes of Civil Procedure in all 50 states.

And a big fat boiled NO to this:

At Rossillo’s Bagel Store in Williamsburg, Brooklyn, the colourful bagels are usually served with Nutella or cream cheese blended with hundreds and thousands.

[Head chef Jimmy] Taffat says there is a hint of banana in the yellow colour, a hint of mango in the orange and a hint of strawberry in the red. They taste subtly sweeter than the shop’s standard bagels.

In-fucking-correct AGAIN. Bagels do not taste or look like goddamned fruit salad. If your bagels have even a hint of a scintilla of a suggestion of a rumor of mango, you are doing it wrong. You fail. You need to reconsider your life choices, delete your account, punch yourself in the face, go back to kindergarten, and get some therapy. Not necessarily in that order.

This guy? This "artist" named Scot Rosillo, with the Brooklyn bakery, who inflicted this multicolored fruit-flavored bullshit on the world and called it a "bagel"? He can fuck right off in every color of the rainbow, and here is why:

Look. Some of those menu items might in theory sound delicious. But they are unholy, unclean things! You cannot put HAM AND GODDAMNED CHEESE on a bagel. It says so in the Bible. And not in some vague lost-in-translation read-between-the-lines not-even-the-point kind of way, like whether you can do buttsex or how much you'd have to pay for a wife, with the cost of inflation and everything.

God was really clear about no ham and cheese on a bagel. It is like a commandment, carved into stone, carried down from the mount by Moses, who was all like, "Don't kill people, be nice to your mom, AND THOU SHALT NOT FUCK WITH THY BAGELS, JESUS CHRIST!"

You can find "bagels" anywhere now. People do terrible things to them. Like this:

"Bagel Artist," who can fuck right off

All because "Einstein Bros.," which begat "Einstein and Noah Corp.," stumbled upon a clever new trick in the '90s to take money from dumb rich people who did not know what's a bagel. These unnaturally flavored mass-produced unboiled doughnut-shaped rolls were marketed to white bread jackholes who had no idea they were participating in the corruption and perversion of the Jewishes' beloved breakfast food.

You might like it, because you are gross. You might think it is pretty and tasty and mmmmm so yummy good. You might not even know, might never have experienced, a real bagel: with cream cheese and onion and tomatoes and lox, as God intended. Fine. You're part of the problem, but whatever. You do you. Just please, for fuck's sake, don't call that culinary disgrace a bagel.