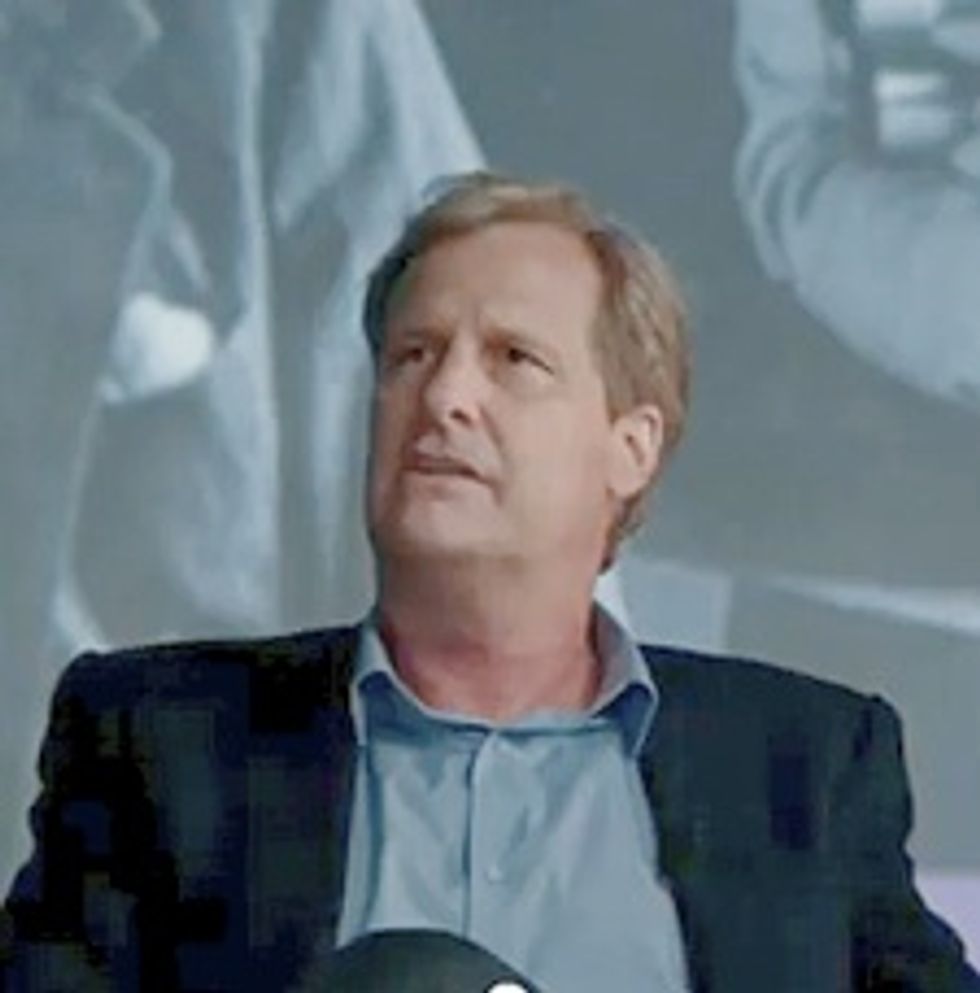 Is everybody excited to watch the new HBO drama about teevee news from writer Aaron Sorkin, the guy famous for showing a bunch of glib robot character spout out Aaron Sorkin's glib fantasy political views?Studio 60 and, to a lesser extent, The West Wing were all so unbearably preachy to watch that we didn't think we'd bother with this new one, but now that every critic has spent the week crapping all over it, we're excited to check it out simply for laughs. The show tackles the abysmal state of the current news media, but, according to critics, somehow manages to screw this up. And it even stars Jeff Daniels, who is generally great! Why does Aaron Sorkin have to ruin liberal politics and everything else?

From Emily Nussbaum's perfect review in The New Yorker:

Sorkin’s shows are the type that people who never watch TV are always claiming are better than anything else on TV. The shows’ air of defiant intellectual superiority is rarely backed up by what’s inside—all those Wagnerian rants, fingers poked in chests, palms slammed on desks, and so on. In fact, “The Newsroom” treats the audience as though we were extremely stupid. Characters describe events we’ve just witnessed. When a cast member gets a shtick (like an obsession with Bigfoot), he delivers it over and over. In episode four, there’s a flashback to episode three. In a recent interview, Sorkin spoke patronizingly of cop shows, but his Socratic flirtations are frequently just as formulaic, right down to the magical “Ask twice!” technique.

There are plenty of terrific actors on this show, but they can’t do much with roles that amount to familiar Sorkinian archetypes. There is the Great Man, who is theoretically flawed, but really a primal truth-teller whom everyone should follow (or date). There are brilliant, accomplished women who are also irrational, high-strung lunatics—the dames and muses who pop their eyes and throw jealous fits when not urging the Great Man on. There are attractively suited young men, from cynical sharpies to idealistic sharpies, who glare and bond and say things like “This right here is always the swan song of the obsolete when they’re staring the future paradigm in the face.”

The show features three people of color. The most prominent is an Indian staffer named Neal Sampat, played by Dev Patel. The dialogue makes fun of McAvoy for calling him Punjab and referring to him as “the Indian stereotype of an I.T. guy,” but the show treats Neal with precisely that type of condescension. Neal is a WikiLeaks fan who writes the show’s blog, but he’s a cheerful cipher, a nerd who speaks nerd talk. There are also two African-American producers, who are introduced to the audience when McAvoy—who is publicly memorizing the names of his staff, having been accused of not remembering them—says, “Gary. Kendra. Gary’s a smart black guy who is not afraid to criticize Obama. Kendra got double 800s on her S.A.T.s, makes Gary crazy. I studied.”

Jake Tapper, reviewing it for TNR, makes the point that the important stories Will "Great Man" McAvoy focuses on, supposedly because they were ignored by the fucking media, were actually... pretty well covered! Don't you remember reading/watching dozens of reports about governmental/corporate neglect that led to the BP oil spill? No, you don't, because no one ever even suggested that until Jeff Daniels did on the teevee show:

But more often than not, Sorkin simply demonstrates his own confusion about what ails journalism. He begins with the BP Deepwater Horizon disaster. One of McAvoy’s producers has expert inside sources at BP and Halliburton, so ACN’s “News Night” leads with the story as a tale of environmental disaster, corporate sloth, and government impotence. Meanwhile every other network—bereft of such information—is myopically focused on the fire on the oil rig and the deaths of eleven workers. But citing the BP oil spill is a curious way to charge journalistic malpractice: By my recollection, that was a story the media covered fairly aggressively and responsibly.

Other brilliant news coups that "sane Republican" Will McAvoy and his team of manic deathbot news heroes are proud of, according to Atlantic Wire terror merchant Richard Lawson, include reporting on the shooting of Gabrielle Giffords:

The show is mostly a bummer, a poorly conceived (why 2010???), heavy-handed affair (the Gabby Giffords sequence, set to Coldplay's "Fix You" and full of plenty of "we did it" self-satisfied smiles, is almost offensive in its synthesized grandeur) that mistakes canned wit for sharpness and overreaching for depth.

It sounds so awful. Did you all watch Veep, though? Your Wonkette loved Veep. It was so much more realistic than anything Sorkin's ever done, which is sad, because Sorkin actually tries to be realistic. Jokes are better than self-importance, the end.