A Children's Treasury Of Comical Excerpts From Blaggy's FBI Affadavit 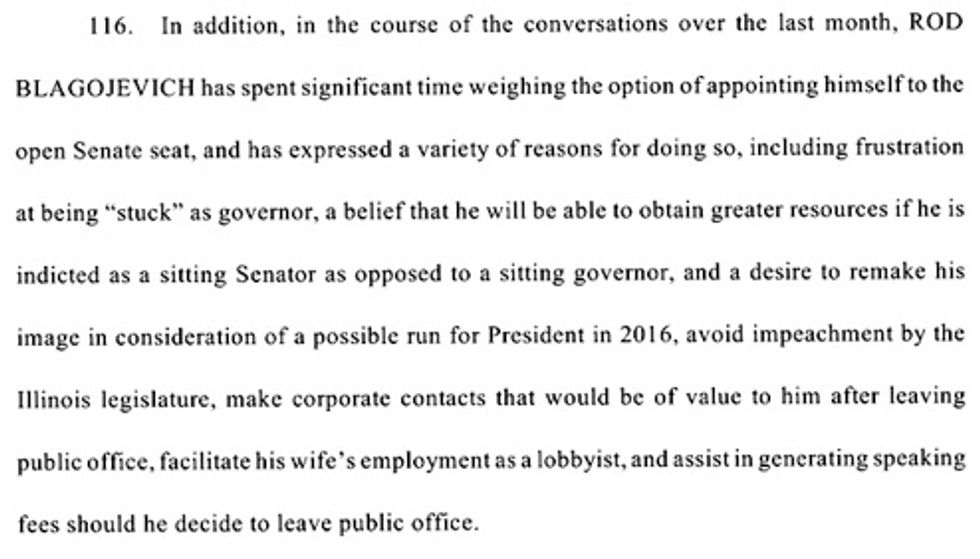 Well, we had to do this post at some point (not really!). Thank you to The Smoking Gun for providing this juicy excerpt from the FBI's affadavit re: the various stupid crimes of Illinois Governor Rod "Blaggy" Blagojevich in his attempt to sell a United States Senate seat for a cushy job, a cushy job for his wife, or just some cold motherfuckin' cash, preferably from Warren Buffett, who has lots of it.

On Election eve, it became clear even to stupid people like Blaggy that Barack Obama would win the presidency, and the Illinois Governor (me!) would have the authority to fill the vacant Senate seat. Um, JACKPOT much?:

The very wise Blaggy explained the complex situation in layman's terms to his minstrel, the wicked Mr. Harris. Blaggy told Mr. Harris about "the trick," which is that the "negotiation" for the Senate seat must be done "indirectly," because they wouldn't want it to seem too fishy -- no smoking guns, as they say -- when the damn Feds come a-lookin'. Blaggy had already mastered "the trick" of secrecy with his untraceable method: to ask everyone in power, directly, how much money they would give him:

Minstrel Harris heard on the Internet sometime that there are some "private foundations" that he could run or something and they all pay a million dollars a year. He named a few of these, including the Red Cross, which has a long and proud history of being run by people equally as corrupt as Blaggy. Blaggy responded, sure, whatever, private loser company sounds fine, make them all give me money:

Minstrel Harris googled around some more about these private foundations and prepared a detailed report about each one's capacity for top-down corruption. Blaggy just wanted a cold motherfuckin' number.

This passage reveals Blaggy's inability to differentiate between what people "can" do and what they "will" do. Most people learn about this distinction during childhood:

After much thought, Blaggy acknowledged that Barack Obama probably would not appoint him to a Cabinet-level position for the pussy reasons that (a) his approval rating was 4% (literally) and (b) his approval rating was 4% because he was involved a multi-year corruption scandal. What the heck is that? Why would know-it-all Obama have assumed that Blaggy was a crook, except for Blaggy's constant attempts to extort him everyday?:

Blaggy then set his sights on a new plan, this one involving a record number of maneuvers that "can," technically, take place: Get Obama to give the damn wife a bunch of high-profile jobs -- she probably has a high school degree or whatever, good enough -- in exchange for his Senate choice. Untraceable!:

Blaggy didn't understand why Obama or his staff would reject these sexy sexy deals he kept putting together -- they were like the subprime mortgage-backed securities of Illinois politics, for Christ's sake!:

At this point Blaggy started running around the mansion, naked, carrying a bindle of live rats over his shoulder, screaming at the wall, asking the kitchen chefs and dogs why they wouldn't give his wife $150,000 or however the fuck much they always should be giving her:

Minstrel Harris opened a bottle of $4 champagne and shared it with a despondent Blaggy on the kitchen floor. They talked about how weird it is that in a supposedly "free country," there are an awful lot of laws. Then! Lightbulb: Blaggy realized that if he appointed himself to the Senate seat, then there would be no laws! He told Minstrel Harris to google around for more info on this:

What was all of this for, Blaggy? Now we know: he wanted to be president in 2016, or escape current impeachment, whichever is better. Because if HE was president, then imagine all the jobs HE could give to Gov. Rod Blagojevich of Illinois, right?: