A Children's Treasury Of Douches At CPAC, Day One 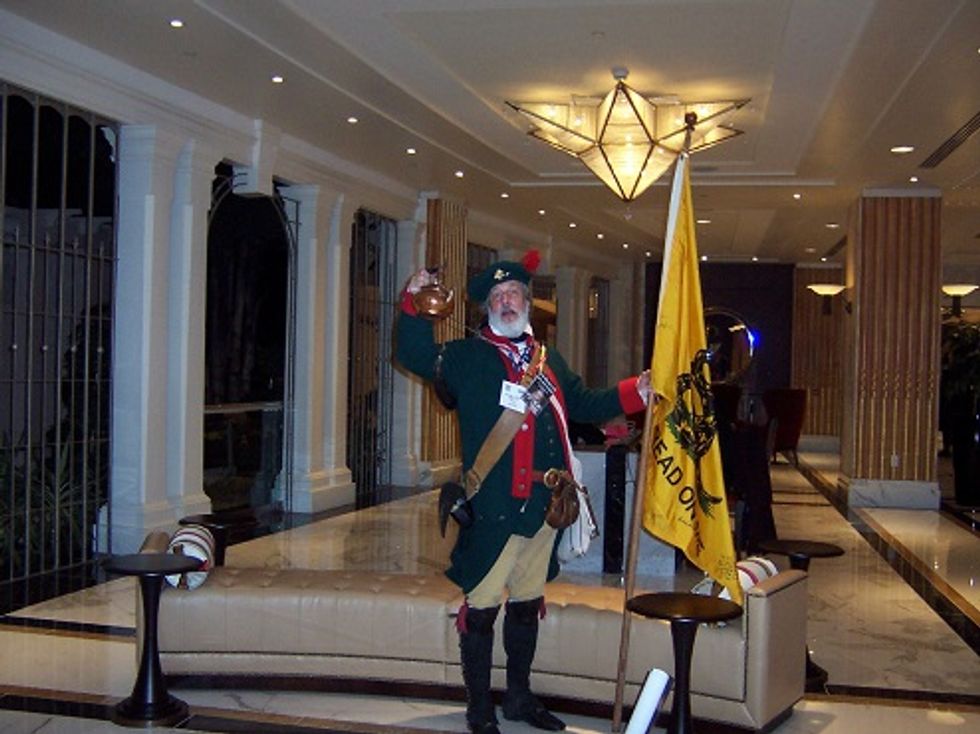 The Gaylord National Resort is more than just a hotel with a name that makes pubescent boys snicker. It's also a glassed-in mini-city with living trees and actual birds and tiny houses that hold patriotic gear stores and, for the second year, it is the Land of CPAC. Come along and let us visit this wondrous fantasy world!

The Conservative Political Action Conference gives the American right a chance to be themselves in a safe, supportive environment conducive to learning and growth. Rep. Paul Ryan bestowed upon us the knowledge that "the center of gravity is shifting," which we assume he adapted from some blather spoken soothingly during a yoga class he'd just come from. The center of gravity in his touching story about school lunches had certainly shifted, with a child in New York magically transformed into a wholesome tot in Paul's home state of Wisconsin and the idea of helping kids in need of food changed from laudable behavior to unimaginable emotional cruelty. Paper bags forever! Free lunches never!

This year, CPAC is also a place for redemption. A previously sidelined man named Chris from New Jersey, clutched to CPAC's bosom after being unfairly maligned for letting toddlers in his care play with their toy cars too long, taught us that Democrats are the real monsters of intolerance for never letting pro-life people speak at their national convention. Also that "the most dangerous ten feet in Washington is between anyone who wants to start talking and a camera." We were alarmed for a moment, because we were between him and a camera and he was definitely talking, but then we remembered we were safely in Maryland.

Marco Rubio's lessons about America's potential as World Boss seemed slightly contrary to his criticisms of "big government" until we realized that his vision involved ignoring the United Nations, who "can't do anything," and using our big government for smacking around the other countries. He talked a lot about how America should deal with rival nations but did not mention the people living in them or whether we should allow any of those people to live here instead. It seemed like a sensitive subject so we decided not to press him.

The best, most golden wisdom of all came from small business owner Donald Trump, who told us how right he was to be so devastatingly critical of China. All of his Chinese friends tell him that! His touching tribute to "the late, great Jimmy Carter" provoked titters for some reason. Mr. Trump likes to create "big-league" jobs, which he will be doing better than anyone else when he churns out fresh hotel-meat in the historic Post Office Building "right down the street from the White House." Presumably this will give Mr. Trump a convenient place to stay after being elected President while his new residence is coated in 14K gold and filled with potted palms to meet his exacting standards.

CPAC isn't just about elected officials and serial declarers of bankruptcy. After the speakers had cleared out, the ballroom was outfitted for a party to celebrate the 50th anniversary of the American Conservative Union, complete with rock/country/patriot band Carolina Liar. They had popcorn! The fashionable blue neon entrance arch was as far as we got, but it sounded loud and smelled buttery.

But where were the youths? The Gaylord was jammed with bright-eyed young conservatives who'd come from all over the country to mix and mingle and apparently each and every one of them had shown up at the College Republicans' hospitality suite on the 7th floor. We wanted to enjoy a beverage and meet the natives, but the room was already far too crowded with the leaders of tomorrow, who had spilled out into the hallway with their plastic keg cups and dreams for the future.

The Gaylord's red-carpeted lobby was full of conservatives still wearing conference badges and obviously too hopped up to sleep. One popular attraction was snapping photos with this fellow, who promised us he would be back on Friday in his Patrick Henry outfit. We wouldn't miss it.