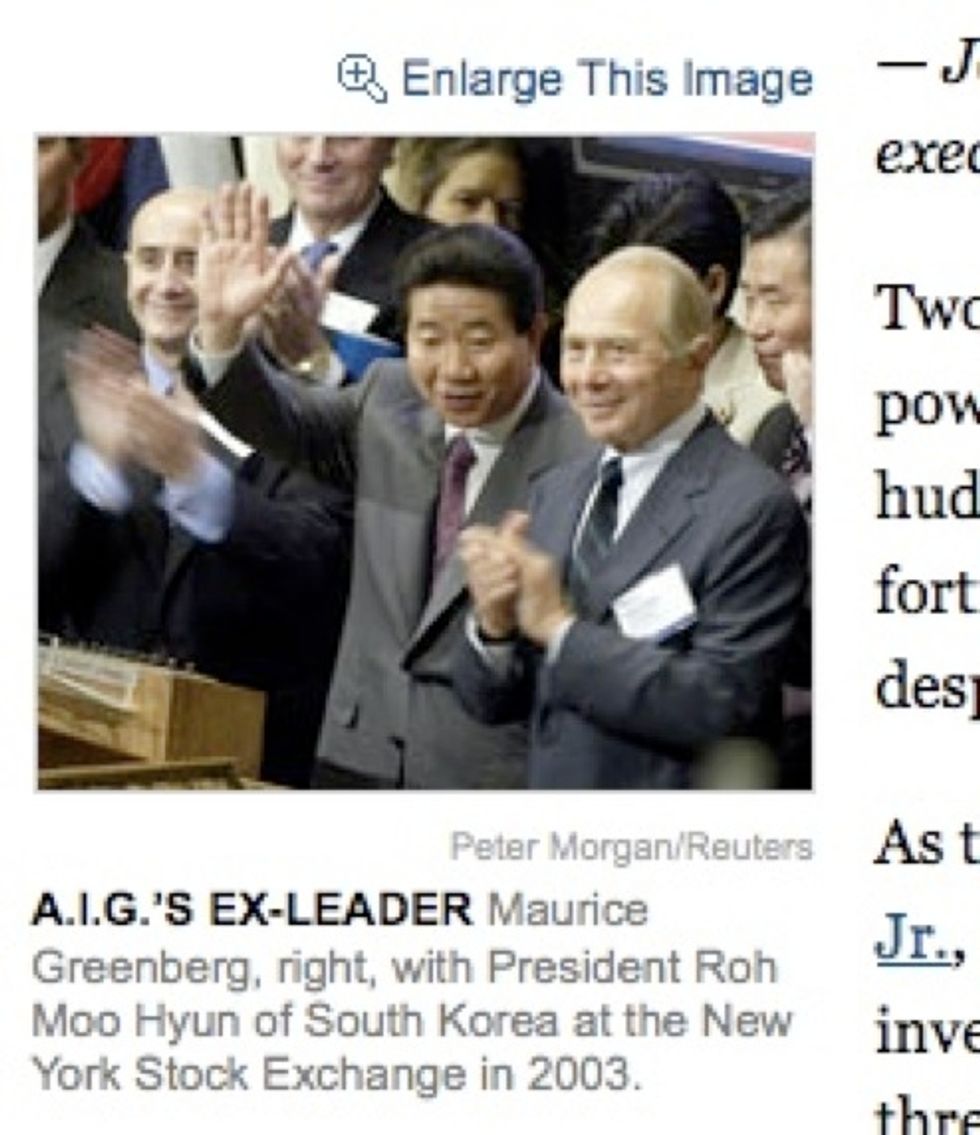 After the economy and capitalism completely died in September because one freaking company called "Lehman Bros." was denied billions of dollars from the Federal Government, the liberal New York Times has been running a weekly-ish series called "The Reckoning" about the various Wall Street jackals -- i-bankers, hedge fund managers, risk-rating companies -- who pooled their talents together to somehow, magically, destroy the entire world with a mere HOUSING PROBLEM. All of the articles in this series are well reported and subtly vilifying. The best part about reading them, though, comes as you scroll down to the fifth or sixth paragraph and see an accompanying picture of some douchebag you've never heard of with a caption describing how this person ruined your life. We've compiled screenshots of these instances from many stories in "The Reckoning" series and blown them up, to heighten the embarrassment.

Ah, here's some a-hole whose former company now has $150 billion of your taxpayer money. He is there with a Korean guy at the Palace of Money. Later, he diced up the Korean guy and repackaged him, somehow, into a series of mortgage-backed tranches that his friends invested in synthetically. This murder technique is called a "derivative."

You may know this guy; the conservatives hate him because he's black, and all Fannie Mae did when it "greatly expanded" was give mortgages to his lazy black friends. The puppetmaster behind all of this was Jimmy Carter, 30 years ago.

Here's America's "Maestro," Alan Greenspan, preaching about computerized risk models to the poor Indians. Hint for future alien generations: If everyone in charge of money & power designates one old fart as "The Oracle" and lets him determine all global policy... he might develop some hubris!

Here's an illegal immigrant who came from Mexico to fulfill the American Dream: ruining America.

Of course, our current problem sits here musing about whatever most recent decision was obviously a mistake. Did you know that he runs America now?

This Nazi went to buy American mortgages at an Irish Bank to get his own little "pot o' gold" (SORRY HAD TO SAY IT) and ended up bankrupting Iceland somehow (maybe), which was what the Nazis wanted to do all along.

They're gonna love him on the left there, Butterface, they're going to roughen up that soft skin in prison all right. Same with the less-fat middle guy. None of these people will ever actually go to jail.

Yeah, MIGHTA BEEN AN INTEGRITY PROBLEM when Moody's -- the risk rating agency that everyone bases everything on -- went public and was under intense shareholder/management pressure to drive up revenue!

It's Trig! No, it's Dow Kim! He's the topic of today's piece about Merrill Lynch -- specifically, why he ruined it! You wanna know? Read the caption. He could not possibly have gotten that bonus in 2006 if he had acted responsibly! WHY IS DOW KIM SO MISUNDERSTOOD?