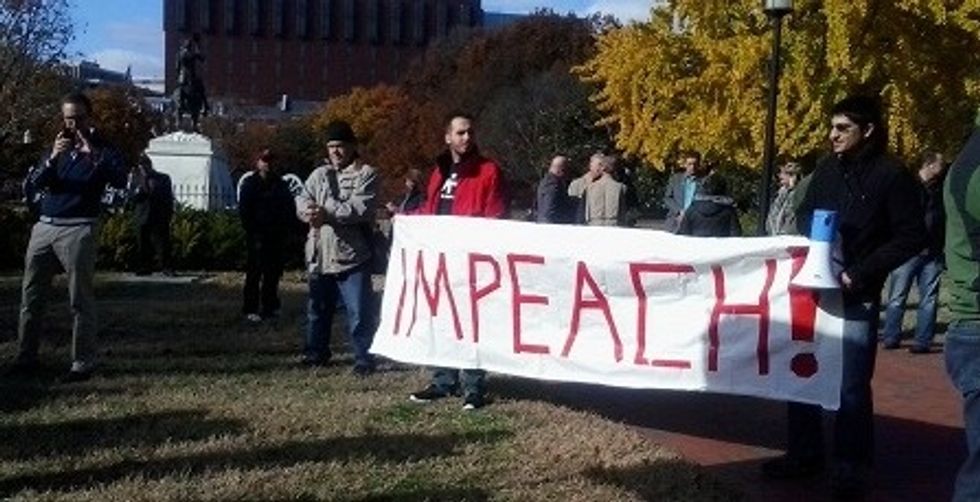 Larry Klayman is a man of ideas. Frequently they involve unsuccessfully suing someone!

Sometimes, though, he likes to enjoy some time outdoors with his friends while advocating the overthrow of the government.

Larry held a rally across from the White House, where President Obama continues to live in spite of Larry’s well-reasoned requests to “put the Quran down, to get up off his knees, and to figuratively come out with his hands up.”

In addition to some familiar faces from the last party Larry graced with his presence, there was some narrowly-tailored star power on hand. Former congressman and Clinton Impeacher-in-Chief Bob Barr assured everyone that history would look kindly on their grass-trampling this fine day, and this guy claimed he filed the first federal birther lawsuit against Obama in 2005 and said he’s about to announce his second run for President, so I imagine you’ll be able to catch him onstage during the first couple of 2016 GOP primary debates.

The crowd, with roughly the population of one rush hour Metro car, came prepared to demand that the government address their list of grievances.

The grievances that they were free to display on signs, and bellow through an amplified speaker system, in a well-kept park approximately one city block away from the residence of the leader of what they claim is a tyrannical government.

Be inspired, America. The Constitution protects the right of a low-information blowhard like Larry Klayman and the wayward souls who rely on him for information to gather across from the White House and call for the government to be overthrown. Not a single skull was cracked. The closest thing to a police presence was Captain America, and he was only there to hoist his dangerously long flagpole. For freedom.