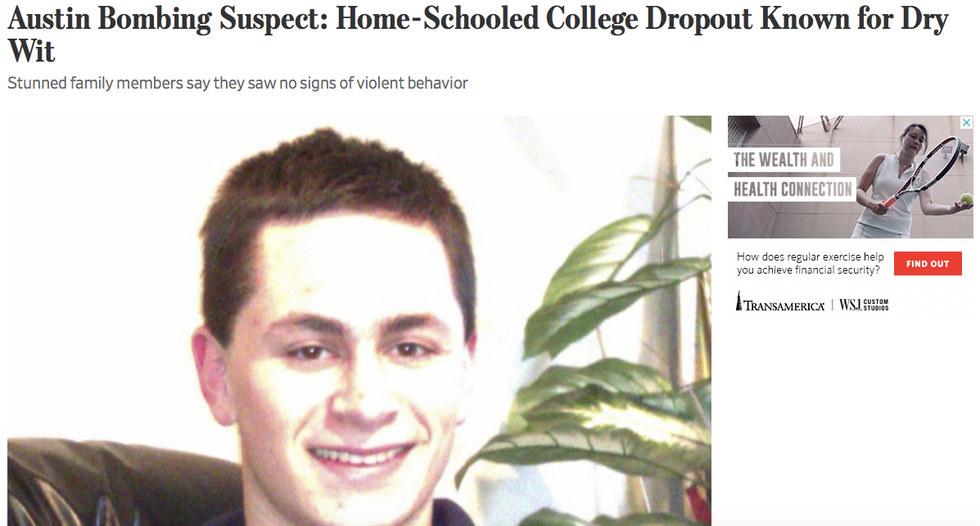 With every mass murder come a mass number of bad takes, and the Austin bomber has been no exception. From family members and police chiefs framing him as a great kid except for the whole killing people thing to alt-right idiots trying to insist that a conservative homeschooled Christian kid was actually a Bernie Sanders-loving member of Antifa, to incels blaming the world for not being nice enough to white guys, we've collected them all in one post for you to cringe at.

I'll take "things you'd only hear about a white male terrorist" for $1200, Alex!

While the "dry wit" comment came from a family member, it was the Wall Street Journal's decision to make that the headline of their story. That was a choice. Can you imagine this being the headline of any story about a person of color who had gone around bombing people? Or committing any crime at all? Because I really cannot.

The aunt interviewed by the WSJ also described him as "the life of the party."

“We had no idea of the darkness that Mark must have been in,” said his aunt, Shanee Courtney, adding, “For him to flip like this is extraordinary. I’m sorry we couldn’t have seen it.”

Ms. Courtney, who lives in Colorado and hosted the Conditt family over Christmas, described her nephew as the life of the party, who had a dry wit and said funny things when the family played cards.

The descriptions given of Conditt sound a lot more like traditional descriptions of victims, rather than perpetrators. He liked tennis! He "stood out for his intelligence"!

Mr. Conditt, who blew himself up after a showdown with police Wednesday morning, stood out for his intelligence, people who knew him said. He had once parried with classmates in a college class through blog posts, voicing his opposition to same-sex marriage, among other issues. He liked tennis, cycling and music, he wrote.

Let me tell you, I read those blog posts -- and a fabulous genius he was not. I'm sure these people felt this way about Conditt, while I'm sure they're shocked and horrified, but maybe this is not the thing we need to be leading with here. Especially since, as many have pointed out, this stands in stark contrast with the way the media portrays black victims of violence.

Exhibit A: a serial bombing terrorist.
Exhibit B: an innocent child.

This is not objectivity. The @nytimes is in the business of humanizing white murderers and demonizing murder victims of color. #WhitePrivilegepic.twitter.com/hKEn81gp6L