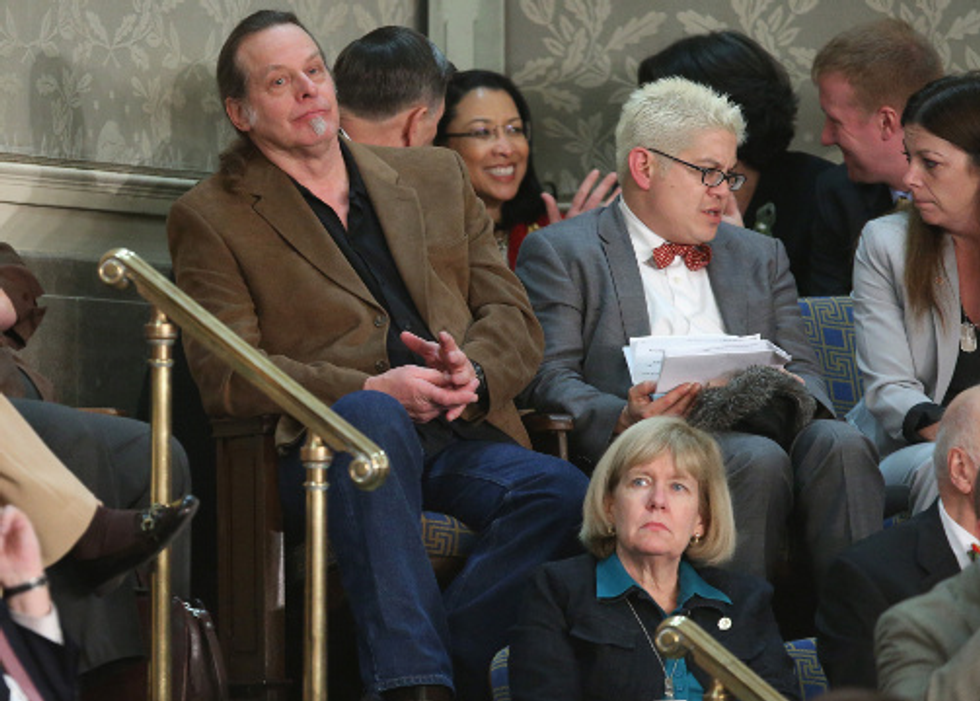 That gentleman in the bluejeans up there, leaning uncomfortably into the aisle at the State of the Union address is one Ted Nugent, whosereputation preceded him. Seated next to him, at the invitation of Oregon Rep. Earl Blumenauer, is another musician, Pink Martini's Thomas Lauderdale, from Portland. Besides performing hip retro lounge music, Lauderdale is also, as Gawker puts it, "the anti-Ted Nugent: A liberal, Occupy-Movement-supporting, openly gay civil rights activist who favors gun control and loves classical music." While Gawker attributes the seating arrangement to trolling, we didn't see any confirmation that it was anything other than a fine karmic coincidence. In any case, Lauderdale said they had a pleasant conversation while waiting for the event, and thought Mr. Nugent was a "real gentleman." We are pleased to report that Nugent more or less behaved himself, although a tweet from Dave Weigel noted that the super-patriot did not even "stand and clap for 'our brave men and women in uniform are coming home.'" But can you blame him? If we were the Secret Service, we'd have warned him against making any sudden movements.

What other News McNugents do we have for you? Well, remember, this is a man who typifies the kind of "straight talk" that Bill O'Reilly thinks the GOP needs to embrace, so it's no surprise that when

asked for his opinion of the President's speech, Nugent provided this piquant analysis, after faking a yawn:

“Does kiss my ass ring any bells?” drawled the Nuge, who sported a camouflage cowboy hat.

“I’m so excited that someone is going to bring about world peace and save the children,” he quipped.

“And thank God he’s gonna stop global warming, I was starting to get concerned.”

Haw-haw! Truly, he is the Kwisatz Haderach of political quips, a veritable second coming of the plainspoken Will Rogers! Also, when introduced to a reporter from the Voice of America, Nugent interrupted, “I’m sorry, I’m the fucking voice of America!”

Mediaite reports that, despite predictions that Nugent would be an irresistible attraction to the media, he was not featured in any crowd shots during the speech, and was excluded from immediate post-SOTU coverage, although a few reports did quote him Wednesday morning, particularly his assertion that

Rep. Jim Langevin (D-RI), who was paralyzed in a shooting accident, had “Shit for brains” because he was critical of Nugent’s attendance at the address...

NBC News’ Luke Russert later asked Nugent if he thought that was “an appropriate thing to say about a sitting member of Congress who’s in a wheelchair?”

Nugent, no stranger to feces, responded that it would take “genuine fecal material instead of brain matter” to suggest that he doesn’t “feel sorry for the victims of violent crime.”

And finally, we urge you all to take New Republic's Nugent Quiz, which is fun throughout, but whose first question also confirms what we'd suspected was Steve Stockman's motivation for inviting Nugent in the first place (warning: minor spoiler after the blockquote):

1. True or false? Rep. Steve Stockman (R-Tex.) invited "patriot" Ted Nugent to be his guest at the State of the Union address because he was a fan of his music.

a) True. "Cat Scratch Fever" was the first single he ever bought.

b) False. It was his way of sticking it to the anti-gun crowd after Rep. Jim Langevin (D-RI), paralyzed by a stray bullet as a teenager, urged lawmakers to invite survivors of gun violence as their guests.

Yep. It's "b" all right. Enjoy the quiz! Watch out -- there are some trick questions.