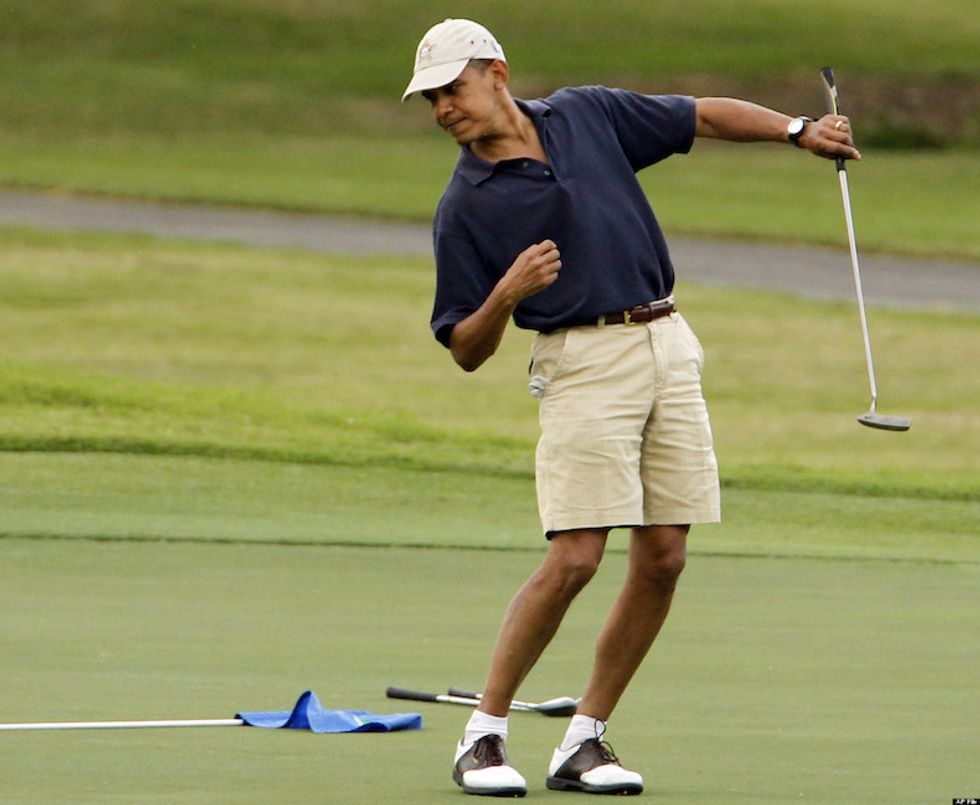 Barack Obama: golfing President, or golfing TYRANT!? That's the hot question from the Top Conservatives on Twitter today, after Instagram user larrydoh found one of Obama's errant shots in the woods at Congressional Country Club and then 'grammed it for the world to see.

Twitter user Fran Sanfrisco (GET IT!?) had similar thoughts and made sure to include the hashtag #nobama so that nobody would get confused by her high-minded satire.

Here's the #HotTake headline from the nine paid staffers at Twitchy. YA BURNT, BAMZ.

Twitchy did, however, direct our attention to the rarest of rarities, Brooklyn-based conservative hipster "S.M." who contributes to the conservative website Ricochet. The last known sighting of a young conservative in Brooklyn happened during the Reagan Administration, and the breed was thought to have either gone extinct or crossbred with local brogressives, so thank you, Twitchy, for your service to science.

John Nolte, who is a perennial favorite to win the Hackiest Hack on Twitter Award, flashes the wit that made him a star at Dead Breitbart's Cyber Home for Failed Stand-Ups.

Self-described "paleoconservative Christian entertainer" Pam Smothers saw all of this coming more than a month ago, when she tweeted out this hilarious "joke." No, we're not sure if Smothers has any brothers, and yes, that was the first thing that came to our mind.

Conservative "suspense/mystery writer" Suzanne Rossi asked if Obama declared his lost golf ball a "mulligan." Mulligans, of course, are the shots you hit after you hit a bad shot, but why should a professional writer like Suzanne Rossi be bothered by the proper meanings of words?

And "Green-thumbed pro-life pro-gun constitutionalist USCG veteran" Twitter user Alo Konsen gets to the heart of the matter, proving that brevity is the soul of derp, and that no golfer has ever personalized their golf balls before.

Is this golf ball thing just another desperate attempt by Obama to distract the American people from his many scandals? Was Obama's caddie given a stand-down order when he was already on his way to search for the brave ball that Obama abandoned? Darrel Issa, we beseech you, please investigate and impeach.