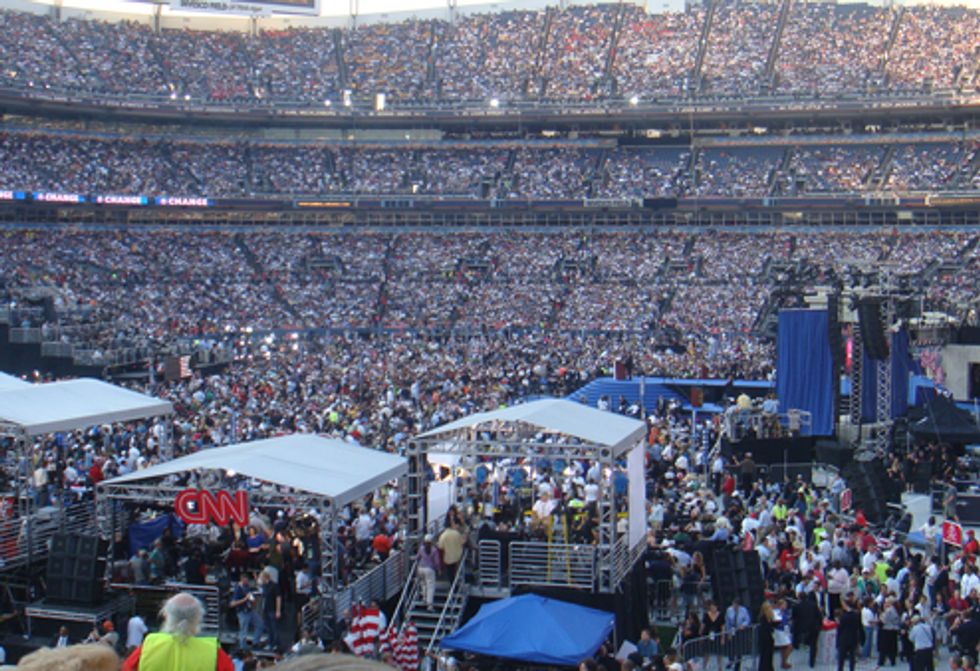 Hello, friends! We have completed our four-mile 2008 iteration of "Sherman's March To The Sea" and, appropriately, burned down all of once-happy Denver in the process. Again, we have walked back from Invesco Field and destroyed Denver; it's probably on Drudge or Yahoo News or something. As we were going to Hope Field at -20,000 o'clock this afternoon, who did we find on our Shuttle but lovable Connecticut failure Ned Lamont, the 2006 Democratic candidate for Senate who lost to Joe Lieberman, an independent shit-rat. What a guy that Lamont is! He was entering the stadium just like everyone else: in agony.

While we cretins waited in line for nothing, these Fat Cat businessmen were playing golf, in the parking lot.

Did you know it's Sara's birthday today, or rather yesterday? She turns 84 years old, just like John McCain! Oh and there's Ned Lamont just stone cold standin' in line. He also turned 87 today!

We asked the Official Obama Vendors, "How much are those plastic molds of Obama's torso?" They were not for sale, replied the dinguses.

Finally, the eternal Resting Place of Ass. Until the Secret Service came and stole our shit while we were getting lemonade, wtf. This would've never happened in Ned Lamont's Connecticut.