A Children's Treasury Of Poverty Iconography 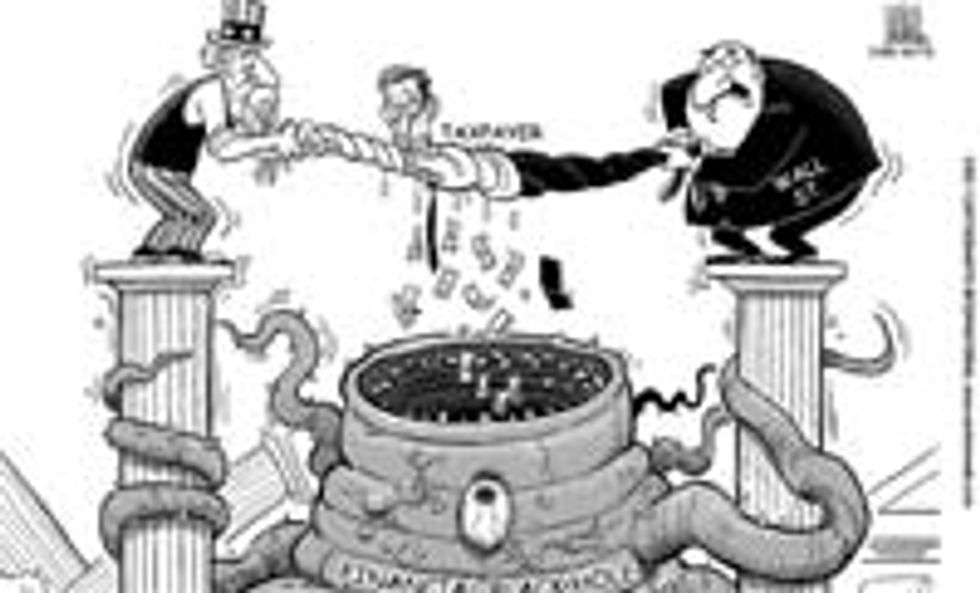 By the Comics Curmudgeon
So apparently 60 percent of you think that we are on the verge of a new Great Depression! Hopefully those of your who believe this are preparing yourself for the coming crisis, by putting your money in low-yield, low-risk investments, stocking up on canned food and ammo, and drinking heavily. But there aren't just practical preparations to be made; you've got to get ready aesthetically, too, to understand the common visual language of total social and economic collapse. Get ready for the symbols of our new lives!

Hobos. Remember our last Great Depression, where even the homeless, unemployed beggars were neatly dressed and stood on corners asking for change with dignified signs? Maybe that was just what people told themselves to feel better about the reality, but this time around we assume that there will be no pretense. Most of us will be reduced to filthy, desperate, matted-haired monsters, driven stark raving mad by the cold, the poverty, and the drugs we'll take to help us forget the cold and poverty. This cartoon portrays a much more genteel version of the hobo power plays that will come to punctuate our lives; while the conflict portrayed is a metaphor about power relations between the economic classes, in reality we will be slapping wildly at one another to gain control of the street corners that smell less strongly of urine.

Barrel-based wardrobes. One of my favorite bits of poverty symbolism is the notion that you could become so hard up that you would exchange ordinary clothing for a wooden barrel, which you would sling over your shoulders with suspenders. This implies that there was a point at which a fine barrel, made of hardwood and metal and good for storing salt pork or crackers, was actually cheaper than clothes! It's possible that in the next few years the sweatshop workers of the Mystic East will cease to churn out $9 Old Navy t-shirts and barrels will once again become an economically viable method for covering our shameful nakedness; but it's more likely that we'll just be wearing increasingly repulsive rags, and using precious barrels as houses before eventually burning them for heat.

Fat rich dudes smoking cigars. Of course, not everyone is poor during a Great Depression; in fact, being rich when everyone else is poor is even awesomer than being rich during boom years, because there's less competition for the expensive houses and the five-diamond whores. It used to be that you could identify rich people right away, because they would be fat, while everyone else was forced by their dire straits to stick to a healthy vegetable-heavy low-calorie diet. Now, obviously, poor people will be spending their few remaining coins on fatty foods made entirely from starch and corn byproducts, while only the rich will be able to afford the gym memberships that keep them looking trim.

MONOPOLY, from Parker Brothers! Here's a fun fact: The game Monopoly first became really popular during the Great Depression, as millions of idle Americans sat around with their hungry families in their unheated shacks, filling the long, empty hours with a fantasy of the day when they'd have real money to spend on houses, and land, and food. Here's another fun fact: in the subsequent 70 years or so, the American attention span been drastically shortened, to the extent that expecting us to sit around playing a fucking board game for hours laughing it up over the antics of Rich Uncle Pennybags (yes, that's his name) is pretty much out of the question. Despite all that we're going to go through, we'll idling away our weeks of unemployment playing with our XBoxes, at least until the electricity stops flowing. Then we'll just start punching each other while screaming incoherently.

Terrifying jawless tentacled Cthulhu-beasts, bursting up through the Earth's surface from their unspeakable lairs deep in the bowels of hell. This is not a typical symbol of poverty, at least here in the West, but based on this Chinese political cartoon, it's a well-known icon in the country to which we now collectively owe billions and billions of dollars, so maybe we'd better make nice and get used to the image! Or else they'll unleash the real thing. Oh please, China, don't sic the nameless horrors on us! We'll be good!