A Mass Shooting Happened Three Hours Away. What Are You Going To Do Now? 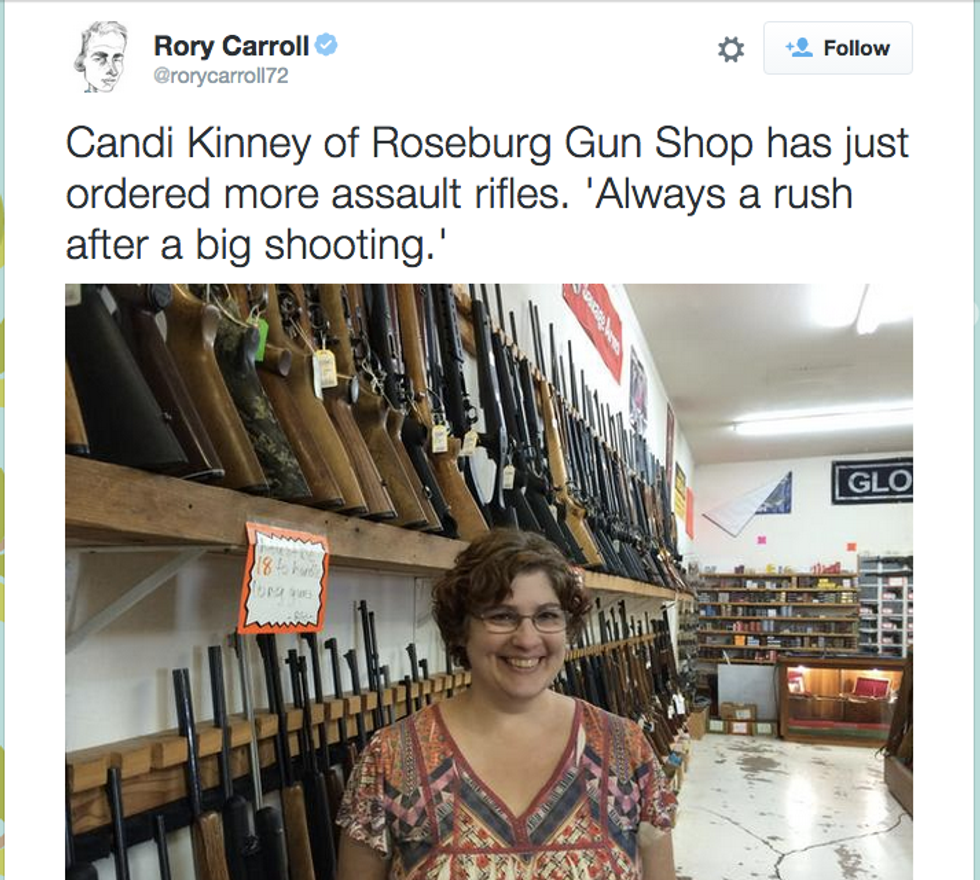 The two foulest instances of journalism I ever witnessed were both committed by the same woman, Christina Gonzales, a TV reporter out of L.A. In the first, she stood across the street from the house of an elderly couple whose daughter's body had just been found. "They've asked us to leave," she said, or with words very similar, "so to honor their privacy we've moved all the way across the street." The second was worse: a woman had come home to find her husband had murdered all five of their children. The woman paced manically back and forth in her apartment courtyard in an insane, frenzied fog of grief. The camera followed her the entire time.

I'm about a three-hour drive from Roseburg, Oregon, the latest town to win big in the NRA Lottery. I'm in the Wonkette Mobile Command Center, from which I am supposed to be reporting "news." And instead of driving down there to do journalism at all Roseburg's citizens, I'm sitting in Portland and preparing for a barbecue.

I am not offended by journalists doing their jobs, flocking to the town, and scaring up anybody they can find to put their microphones in front of, as long as they don't do it Gonzales-style. I rarely watch TV news, so if anyone's camped out in front of victims' homes, I have been spared seeing it. The tweet at the top of this post is a public service by journalist Rory Carroll. I'm glad he's there, taking pictures of that woman smiling with delight at the miraculous windfall for her gun store. Yeoman's service, friend.

For me to drive out there, because I'm in the neighborhood, because I can, would be (almost) as exploitative as that bad, wrong woman. Hey! Let me get in on some of these murder views! After all, you know, I'm right here! Heading out there to find someone stupid, or sad, or wrong, or brave to video so I can "me too!" at a town's (and country's) tragedy isn't necessary. It's superfluous. Plenty of reporters are already there, taking down Douglas County Sheriff John Hanlin's sanctimonious statements. They can do the legwork, so I can hate him undisturbed from here. Should we name the gunman? Yes, Sheriff Hanlin. Should we make it harder to buy guns? Yes, Sheriff Hanlin. Should I punch you in the face? Yes, Sheriff Hanlin. I think I'll take the better part of valor and keep my distance instead. But let it be known: you're a bad man.

The great thing about the Internet is I can say it just as well from Portland as from three hours down the road.

The other great thing about the Internet is I am allowed to tell Sheriff John Hanlin to fuck himself with a stump.