A Rousing Defense Of Rand Paul By Wonkette Against Scurrilous Charges That Were Made By Us, Wonkette 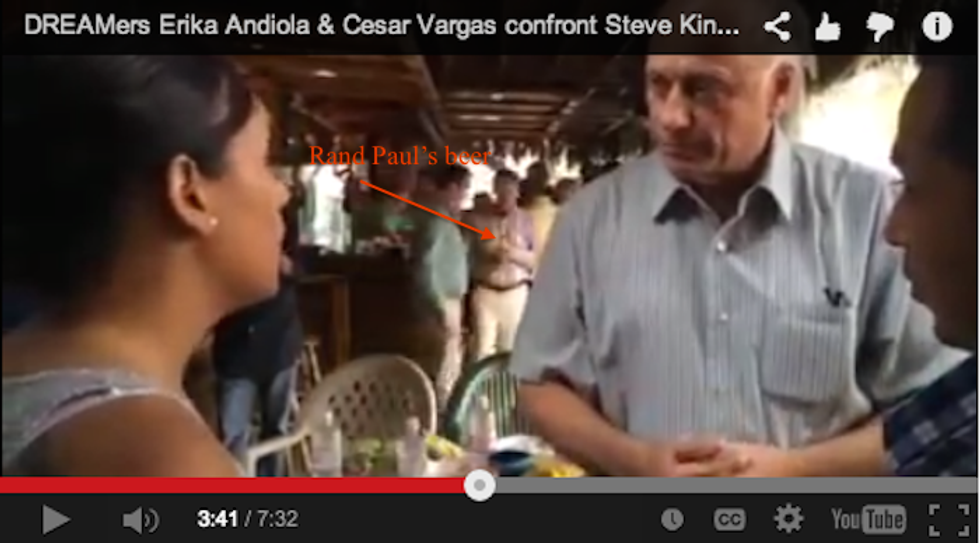 We here at Yr Wonkette, the world's greatest and most beloved mommyblog recipe hub, strive to be like Mary Poppins: practically perfect in every way, but with dick jokes.

However, it has been drawn to our attention, by us, that we made a huge mistake by hurling scurrilous charges against Rand Paul on Tuesday. We, along with the rest of the entire interweb universe, accused him of running away like a coward when confronted by your new hero, America, DREAMer Erika Andiola and her also-hero companion Cesar Vargas. We called him "Brave brave Sir Rand Paul," but in a sarcastic way because we believed, at the time, that he was in fact not brave at all. We assumed, when he was confronted by these DREAMers, that when he suddenly put down his half-eaten burger, grabbed his beer, and made like a tree (that means he leave-d, ZING!), it was because he was too afraid to answer questions about immigration and why he is such A Asshole.

However, and yes, you can quote unquote us on this, WE WERE WRONG:

The Kentucky Republican on Tuesday evening said that just minutes before that video began, a reporter asked him for an interview while he was eating. “And I said, I need to take a couple more bites and we’ll do an interview,” Paul said on Fox News. “And then I was told we had to leave and I had to do the interview, so actually, I stood 10 feet from the people who were doing sort of a kamikaze interview, and I stood 10 feet from them and did another interview.”

Does that sound like bullshit to you? It sounded like bullshit to us. We discussed amongst ourselves that "it's sort of bullshitty" and "I call bullshit" and "he was a fuckin' BEELINE away from that table. No senator BEELINES when told some random interview is waiting on him." BUT. Rather than make scurrilous charges against Rand Paul for being a coward AND a liar, as everyone in the entire interweb universe is noting today, but we will not name names because we are klassy like that, we decided to do some Very Serious Investigative Journalism by watching the video, to Zapruder that mofo and get our answer.

As you can see, there is indeed Rand Paul, approximately 10 feet away, like he said, surrounded by his entourage and also too with the beer in his hand. We even enhanced the image to make sure it really is him in that tragic shirt.