A Wonkette Recap Of HBO's 'Newsroom': Will They Hump? Yes, They Will Hump 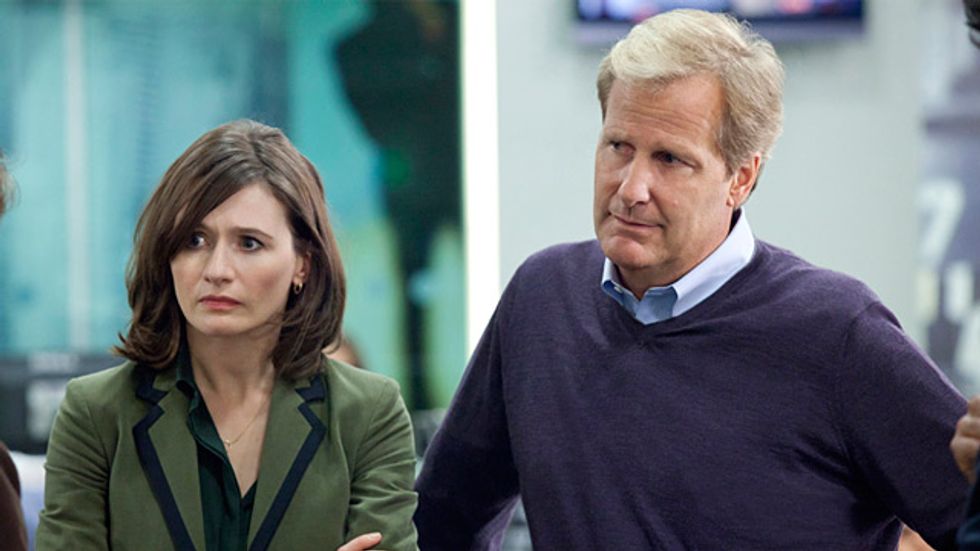 Jeff Daniels is sitting on a college panel, and he's being a dick. He sneers half-assed answers to every question, and then he gets asked a question by a pretty young blonde woman, about America Is Awesome U-S-A. He tries not to answer it some more until he sees the Girl With the Avian Bones in the audience and she keeps shooting him a note from the very back row of the auditorium and he can totally read it and her note tells him to go on a massive Aaron Sorkin screed about why America sucks, so he does, because she hypnotized him with her Queen of Hearts. But also he insults the young blonde woman a lot, because he is a misogynist. Here is your newest Aaron Sorkin stand-in, America. Ladies, you must all now let him do sex to your vaginas.

So then Aaron Sorkin is at work, and everybody has quit because he's a hateful turd pile, and then Jack McCoy is his boss and he is drunk, and he has hired Avian Bones to be Aaron Sorkin's executive producer, and she is an awesome war correspondent lady who has been stabbed and shot at so much, and she and Aaron Sorkin used to pork it is soooo obvious because of the massive tantrum he throws when the drunk DA tells Sorkin he has already hired her. And then Aaron Sorkin does this INSANELY GROSS control-freak shithead thing where he gets her contract renegotiated so he has the opportunity to fire her every week because he only likes her under his thumb even though she is The World's Greatest Journalist, Everyone Agrees. WAY TO NOT BE A MASSIVE SEXUAL HARASSER, AARON SORKIN.

There's a girl, she's cute but not ridiculously cute, like, she could be a real person working in a teevee newsroom instead of a person acting on a teevee show about a teevee newsroom, and her boyfriend doesn't want to meet her parents, because he's got her under his thumb, and Avian Bones immediately latches onto this information in a charming scene about manipulative women (it's really charming!) and then Avian Bones manipulates her own senior producer into staying by pimping out the girl to him by explaining the girl is just like her before she became so much hotter with age, and he is thunderstruck with love for the girl because Avian Bones showed him her Queen of Hearts. Avian Bones is so manipulative, you guys, but she is so good at it, and funny and charming! They should just spin this show off to Avian Bones: Medicine Woman, and Maggie and Jeff or Jim or whoever can come with her and be cute.

Then Deepwater Horizon happens, and Aaron Sorkin trusts Avian Bones to do the whole show without a runlist, on the fly, and it is a smashing journalistic success, and then at the end he's a dick to her again, because they are going to end up porking and getting married forever and ever.

In conclusion: Nobody in the universe cared if Aaron Sorkin and Harriet Tubman were going to get back together in Studio Shitty (we just made that up!), and nobody cares if constipated old Aaron Sorkin is gonna lay a hump on Avian Bones. Ick nast. Tune in next week, for Aaron Sorkin learning to be a real journalist again, and remembering people's names, and humping.