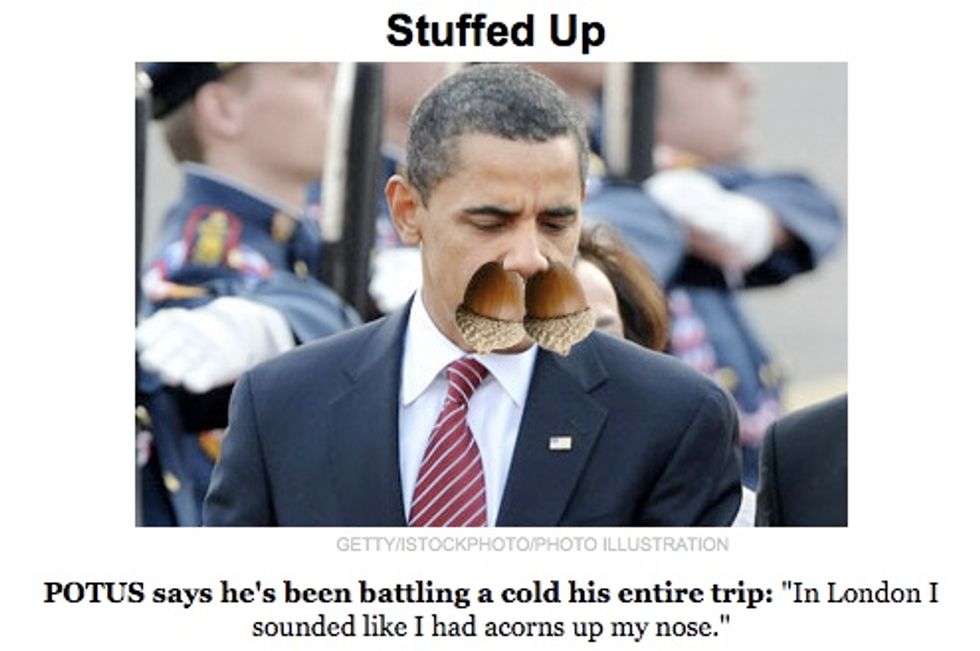 You know what's not funny? Political news outlets trying to be funny. Stop it. This thing, above? This stupid attempt at a Fark photoshop or whatever? No. Stop it. Mark Halperin aka The Page, of TIME Magazine? Actually the opposite of funny. You are paid, presumably, to cover the news about Washington politics -- information, details, that sort of thing. What the fuck, really? Will TIME just start making up cover stories? Have fake columnists and whatever? It's Meta!

Except it's not. It's just stupid. YOU DO NOT "PARODY" THE NEWS IN THE PROCESS OF REPORTING THE NEWS. You people are supposed to be covering things, writing articles about those things, doing research, conducting interviews, filing your articles, and then going home to cry, the end.

You people probably love that Jon Stewart and Stephen Colbert, and especially those wacky typos Jay Leno sometimes holds up, on the teevee.

WELL YOU DON'T GET TO DO THAT.

That is not your job. If you want to try your hand at writing jokes for Comedy Central or working for The Onion, then by all means quit, today, and start sending in your resumes, which will thankfully be ignored, because you people aren't comedy writers. You're self-important mandarins in an industry that's actually dying, right now, in large part because you people have the intellectual wherewithal of a raccoon distracted by a ball of aluminum foil. You see blogs and you don't say, "Hmmm that is an interesting development in new media." Instead, you lose your fucking institutional mind and turn newspapers into blogs. Because that's what we were short of, in this country, right?

You see some dingbat meaningless fad like Twitter and instantly decide you must devote your days to this inanity, typing brief typo-ridden updates about your meaningless life routine. This morning, Steve Case was supposed to appear on CNBC, to talk about business, in America, which is an important subject. But he didn't show up when he was scheduled to show up, and eventually the hosts began idiotically yapping in joy because they saw an update from their missing guest, Steve Case, on motherfucking Twitter. Because telephones and e-mail -- not to mention basic human manners -- just plain stopped working, right?

You people notice that on this Internet, and the cable comedy channels, and oh goodness even on the regular old broadcast teevee on Saturday nights for the past 30 years or so, that some wise-acres are making fun of the news, perhaps commenting in a humorous or satirical manner about topical events. (This may have even occurred before those wacky fake newscasts on Saturday Night Live, but of course there's no way to know for sure.) And then, that's what you want to do, except you want to do this while in the process of actually reporting the actual news. Stop it.

Stop putting "comedy" shows on the cable-news channels at night. If you people refuse to actually work during hours when few people are watching, just sign off, go to infomericals or maybe run a BBC feed. They still cover news around the clock, we've heard.

You, as journalists, are not allowed to constantly bemoan the fate of serious news-gathering operations in this country while trying to turn your news operations into TMZ. Stop it.

Stop twittering, blogging, photoshopping, and dear god please stop trying to make jokes. Report the news or take your buyout and go fuck off with Mark Penn or whatever.