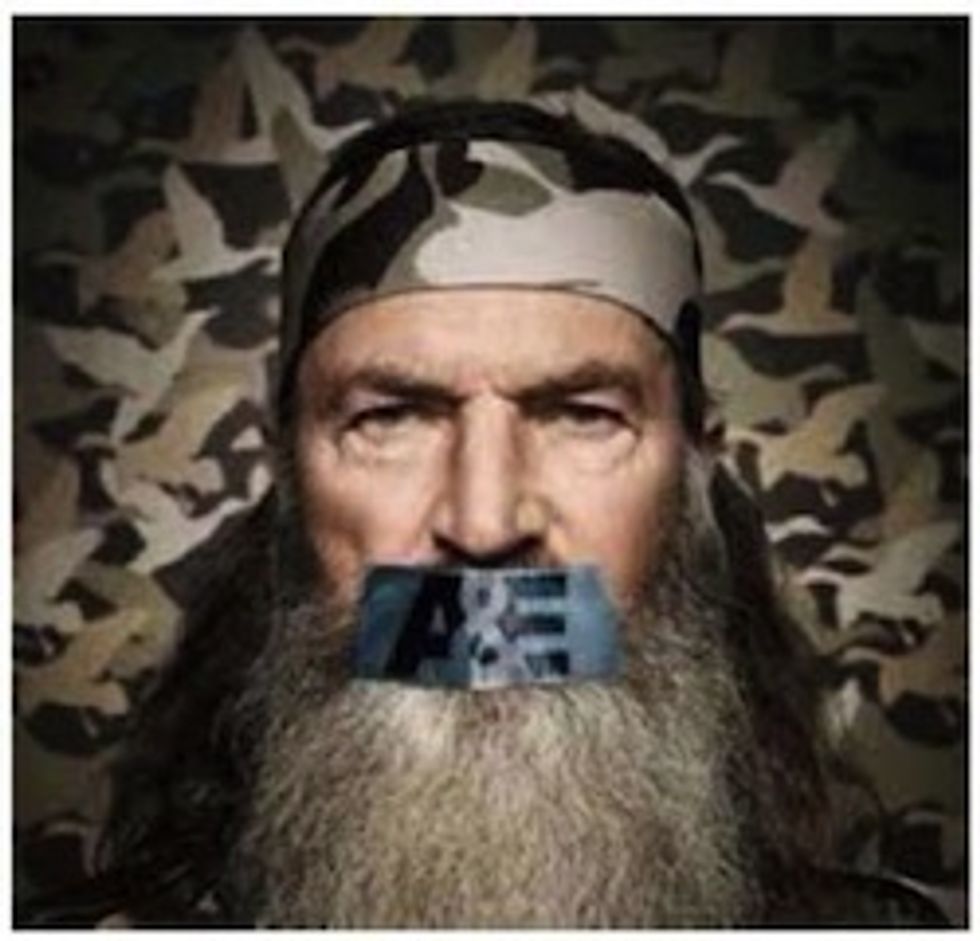 In a move that no one except everyone could have predicted,A&E has reversed its decision to make Duck Dynasty superstar Phil Robertson sit in the have-a-time-out corner and will reinstate him so that A&E can continue to make lots of moneez off rednecks who are really into dudes who make duck-sex sounds:

A&E announced Friday that it will "resume filming" the hit reality television show "Duck Dynasty" with star Phil Robertson following his indefinite suspension from the network last week for comments he made in an interview with GQ Magazine about gays, non-Christians, and African Americans.

Hooray! Free speech winned! This should make the great defenders of the First Amendment right to be on the teevee, like Gov. Bobby Jindal, Sen. Ted Cruz, Professional Quitter Sarah Palin*, and thrice-married Newt Gingrich, all very happy now that free speech is safe again, so long as it is not used for dumb things like saying "Happy Holidays" or "Someone should dookie in Sarah's mouth" or screaming incoherent arglebargle about The Gays. (Oh, no, wait, that is still a protected right, except for Alec Baldwin.)

What is important, though, is that A&E and Phil Robertson have learned their lesson:

The network also promised it would work with Robertson to promote "unity, tolerance and acceptance among all people."

Aw, isn't that so nice? We guess Robertson will now use his platform to promote tolerance of anuses and unity with those blacks who used to be happy before welfare came along and made them sing the blues.

We don't yet know whether this means Alabama state Sen. Jerry Fielding will still feel the need to fight for a resolution stating that Phil Robertson is A Goddamned Motherfucking Hero Like Jesus or whether Jan. 21 will still be “Chik-Phil-A-Day,” when free speech lovin' gay-hatin' Real Mericans will cosplay in camo at the Fried Chicken Home o' The Wingnuts, choking down deep fried processed sammiches to make ... um ... some kind of point about ... um ... something.

But we sure hope so. For the lulz.

*We don't know if Sarah Palin will actually be happy about this news, on account of how she probably won't read it.