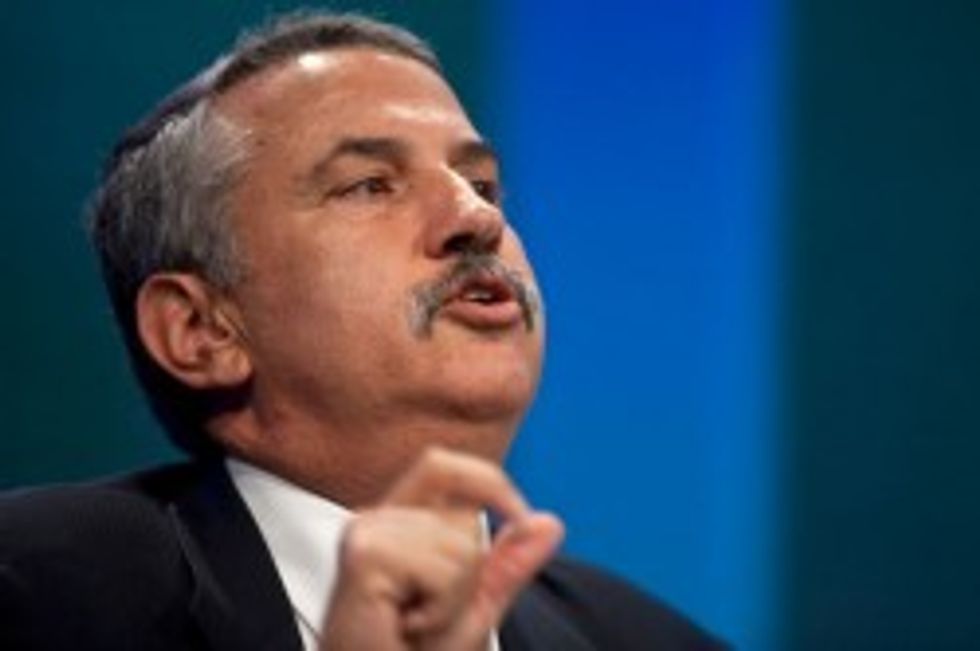 Good news, everyone! Thomas Friedman has decided to write at us again about "hyperconnectivity," and how it will be wonderful for those of us who can dream big and work hard, isn’t that great? So great!

Something really big happened in the world’s wiring in the last decade, but it was obscured by the financial crisis and post-9/11. We went from a connected world to a hyperconnected world. I’m always struck that Facebook, Twitter, 4G, iPhones, iPads, high-speech broadband, ubiquitous wireless and Web-enabled cellphones, the cloud, Big Data, cellphone apps and Skype did not exist or were in their infancy a decade ago when I wrote a book called “The World Is Flat.” All of that came since then, and the combination of these tools of connectivity and creativity has created a global education, commercial, communication and innovation platform on which more people can start stuff, collaborate on stuff, learn stuff, make stuff (and destroy stuff) with more other people than ever before.

Were you are thinking that you have read this EXACT SAME Thomas Friedman once column before? Well you are wrong because you have actually read itseveraltimesbefore: I have an iPad and use Skype! Also, the world is hyperconnected because a robot took someone's job! Etc! Etc! FOR EVER!

For the purpose of critical analysis, let's compare the above paragraph -- which is from today -- with another paragraph he wrote two months ago:

I mean something very big happened in the last decade. The world went from connected to hyperconnected in a way that is impacting every job, industry and school, but was largely disguised by post-9/11 and the Great Recession. In 2004, I wrote a book, called “The World Is Flat,” about how the world was getting digitally connected so more people could compete, connect and collaborate from anywhere. When I wrote that book, Facebook, Twitter, cloud computing, LinkedIn, 4G wireless, ultra-high-speed bandwidth, big data, Skype, system-on-a-chip (SOC) circuits, iPhones, iPods, iPads and cellphone apps didn’t exist, or were in their infancy.

Did we mention that Thomas Friedman gets paid hundreds of thousands of dollars per year to do this? Plus egregious speaking fees? Anyway, don't worry it is totally fine. We know this because according Thomas Friedman, the best measure of his worth as a "journalist" lies in the fact that he is always in the New York Times' "most emailed list." This is a just reward for his  "individual aspiration" and "contribution" to society:

We’re entering a world that increasingly rewards individual aspiration and persistence and can measure precisely who is contributing and who is not. This is not going away, so we better think how we help every citizen benefit from it.

How are YOU, citizen, benefitting from reading the same exact column over and over again in the Paper of Record? Thomas Friedman writes ONE COLUMN PER WEEK. He also lives here. Luckily, Thomas Friedman doesn't think it's a problem that Thomas Friedman seems to come dangerously close to self-plagiarism; in the era of hyper-connectivity, the only thing that matters is whether or not he is on the New York Times' most emailed list (seriously). DULY NOTED, we will continue aspiring to someday get paid hundreds of thousands of dollars per year to write the same thing over and over, and wait to be rewarded for it by "hyperconnectivity."

At least he didn't molest any cabbies for once.