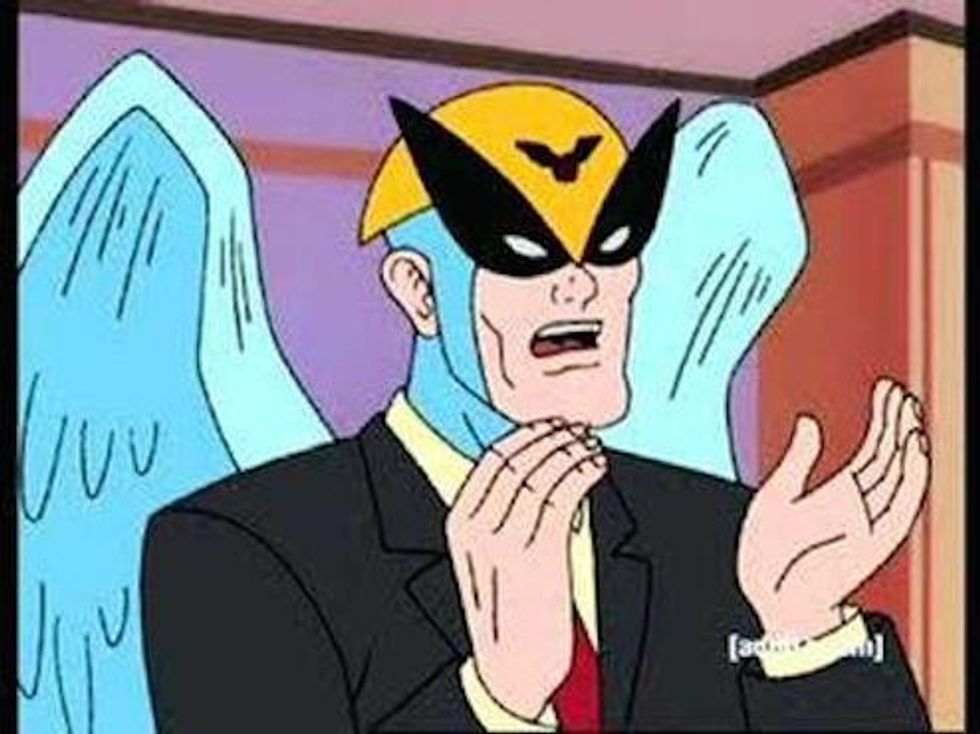 Because he is the most lefty liberal commie Marxist something something who has ever usurped the White House, President Barack Obama nominated this one Georgia peach named Michael Boggs to the United States District Court for the Northern District of Georgia. Boggs, a former attorney and currently a judge on the Georgia Court of Appeals, is exactly the kind of gay-marriage throat-cramming abortions-for-everyone reincarnation of Saul Alinsky you'd expect Obama to nominate. After all, he was a DEMOCRAT in the state House of Representatives. Ipso facto, prima facie, et cetera.

Except for, well, not really.

[NARAL] is alarmed by votes that Boggs took -- as a state legislator in the early 2000s -- to "channel funds to anti-choice crisis pregnancy centers and make a parental consent law even more extreme[.]

And lest you think it is only the baby-killing feminazis who find Boggs problematic, think again, sucka, because there are some blah people who are a tad concerned also too.

Boggs has already come under fire from civil rights icons Joseph Lowery and Rep. John Lewis (D-Ga.) -- both of whom were awarded the Presidential Medal of Freedom by Obama -- for a vote Boggs took in opposition to removing the Confederate insignia from Georgia's flag.

Fortunately, Boggs had an opportunity to explain himself before the Senate Judiciary Committee today, and that went really well for people who are not Michael Boggs.

Boggs had a perfectly reasonable defense of his support for the Confederate insignia on his state's flag. See, it's not that he believes the South will rise again, it's just that his constituents are a bunch of backwater racists and he was simply doing their bidding, as one does when one agrees with one's constituents. He skillfully put this issue to bed forever by gotcha-ing the committee with this Socratic maneuver: "If someone is accusing someone of being a racist, how do you disprove that?"

Ah ha! Since Boggs cannot disprove that his racist vote was not racist -- and besides, as he pointed out, only "some" people think the Confederate flag is, like, the worst kind of racist micro-aggression, but screw those Yanks -- even asking the question of whether Boggs is a little bit racist is totally silly, let's move on.

As for Boggs being radically anti-choice, you can never mind that too. Sure, he co-sponsored a bill forcing pregnant minors to get permission from their parents IN PERSON before obtaining an abortion. And sure, he co-sponsored a bill directing state funds to crisis pregnancy centers, which are basically like little churches where fetus worshippers lure pregnant women suffering from "crisis pregnancy" to tell them they don't need any of that abortion nonsense because it will give them cancer and also make them crazy probably, so they should just Choose LifeTM. And sure, he supported a bill requiring abortion providers to publish detailed information about their practice on the internets. But he didn't write that bill. Heck, he didn't even know what it was about! He just wandered into the office one day and said "Aye," but it's not like he knew what he was aye-ing.

Sen. Al Franken (D-Badassville) asked Boggs if he was aware of the dangers of abortion providers having to publicize their information, including their names. He asked if Boggs was aware of all of the threats against doctors, and the bombing of clinics, and the occasional assassination in the name of "life." Boggs said nope, he'd never heard about any of that -- AND BESIDES, HE DIDN'T WRITE THAT BILL! Kinda of funny (weird funny, not haha funny) that Boggs, from Georgia, had never heard of, say, Eric Rudolph, also from Georgia, who was all about bombing abortion clinics and was behind the Centennial Olympic Park bombing in Atlanta (which is in Georgia; we Google mapped it), who said, in his very own words, that the purpose of bombing the park was "to confound, anger and embarrass the Washington government in the eyes of the world for its abominable sanctioning of abortion on demand."

But nope, Boggs had never heard about any of that, he was just being a good Christian and following the desires of his constituents and gosh, he's sorry about supporting that bill THAT HE DID NOT WRITE, so he can hardly be held accountable for his actions. Move on.

Despite acknowledging that he personally held certain positions, and that he acted on those certain positions when he was a legislator, Boggs explained to the committee that his legislative history had nothing to do with anything, and that as a judge, he has always been totally unbiased and fair and never, ever let his own opinions get in the way of following The Law like a judge should, and if he gets to be a district court judge, he will continue to not have personal opinions and only follow The Law. When all of the Democrats on the committee finished chortling and rolling their eyes, Boggs shut them down faster than a woman's uterus can shut down rape sperm with this critical explanation:

When I was a legislator, I did not have an obligation to be faithful to the rule of law.

Ah ha! Gotcha some more! The rule of law does not apply to legislators. Hmm, just out of curiosity, what oath of office did Boggs take when he was sworn in as a state representative?

I do hereby solemnly swear or affirm that I will support the Constitution of this state and of the United States, and on all questions and measures which may come before me, I will so conduct myself, as will, in my judgment, be most conducive to the interests and prosperity of this state.

And hmm, just of more curiosity, what did Boggs swear or affirm when he went from not being obliged to being faithful to the law to becoming a black-robed impartial umpire?

The difference is obvious. Judges have to follow the laws and Constitution, but legislators only have to support the Constitution but the laws are, like, for judges only. Or something.

Judge Boggs, you seem like a real nice guy who accidentally supported the Confederate flag -- twice -- and accidentally supported abortion restrictions, like, a thousand times -- but it's actually your rico suave semantic attempts to explain that your personal rightwing Christian fundamentalists will never ever in any way affect your ability to follow the law, assuming you bother to do your homework to find out what it is, that really impresses us. Stare decisis! and all. We totes believe you. Wink wink.