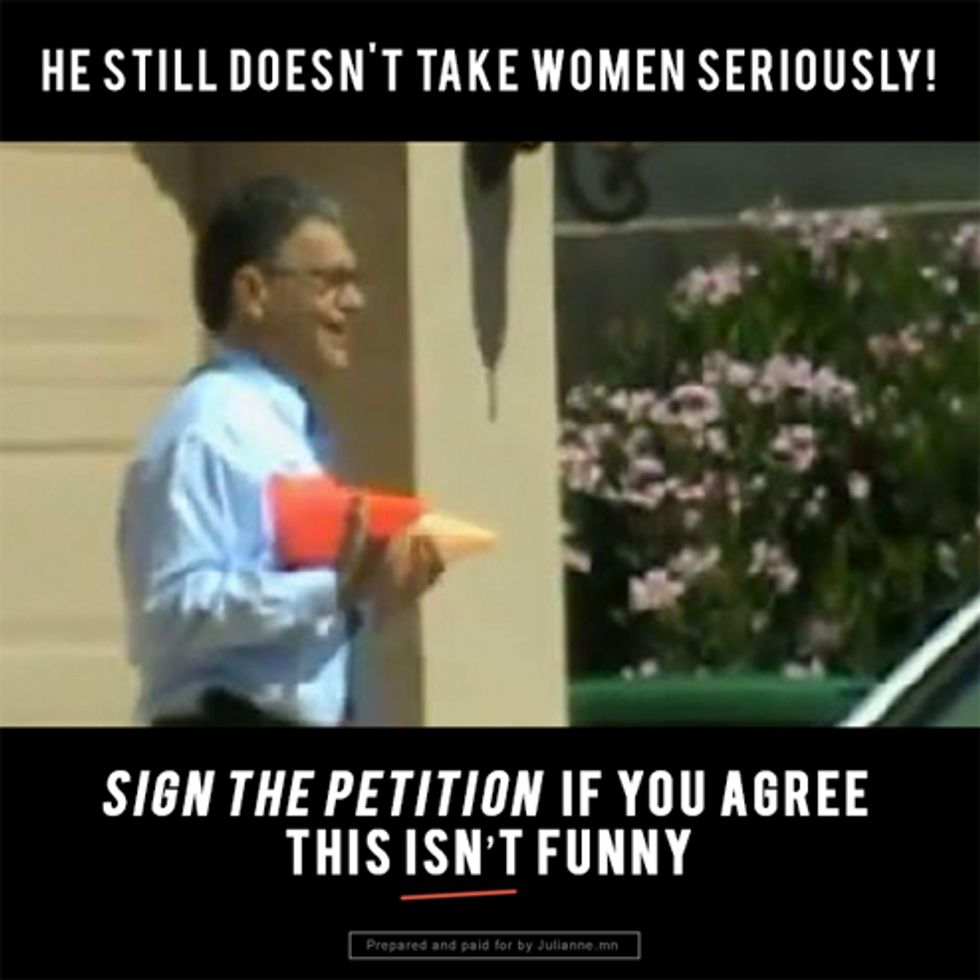 The other day, we brought you themost serious scandal of the 2014 midterms so far: the revelation that in 2012, Al Franken held two small traffic cones to his chest as if they were boobies. After the story was broken by Dead Breitbart's Internet Home for Incoherent Outraged Babbling, it made its way to the campaign office of one of the Republican candidates hoping to take on Franken in the fall, Minnesota state Sen. Julianne Ortman, who tossed it onto her FacePlace page with the accusation that Franken "doesn't take women seriously." Which is so very true, because in 1970-something he made a really dumb rape joke during an SNL writers' meeting, which is the only thing you need to know about Al Franken and his attitudes toward women. Certainly nothing he's done in the Senate -- like his amendment banning the government from contracting with companies that try to keep women from pursuing rape cases, or his support for equal pay, or his support for stronger domestic violence protections -- can ever make up for that. But yes, if you are offended by Franken's misuse of traffic cones, sign the petition -- which is, of course, just a link to get you on Ortman's mailing list.

On the other hand, we suppose we agree that it's not all that funny, but who knows what he was saying -- it might have totally reframed the traffic-cones-as-boobs visuals in a brilliantly satirical ironic context. Clearly, an investigation is needed.

Once again, here's the shocking 13-second video for your Zaprudering pleasure. Note how the Senator steps back, while being a leftist.

Ms. Ortman has been endorsed by Sarah Palin, so you can bet that she's a strict constitutionalist, and a master at identifying outrageous slurs against all women, especially the imaginary ones. Needless to say, Ortman opposes the Paycheck Fairness Act because gender discrimination is already illegal and we don't need a bunch of unnecessary new laws. And of course, she knows what would really help women get ahead: Tax cuts.

She also claims that "We all pay more in taxes than we do for food, clothing and housing combined," which strikes us as a somewhat dubious statistic? Maybe if you live in a paid-off house, make over $300 thousand a year, and are a fruitarian nudist? Probably definitely then.

In any case, as best we can tell, Ortman has great potential for being ridiculous, so it should go without saying that she wins Yr Wonkette's endorsement for the Minnesota Republican primary.