Alabama Governor Kay Ivey Does Not Have Time For Mitch McConnell's Shit! 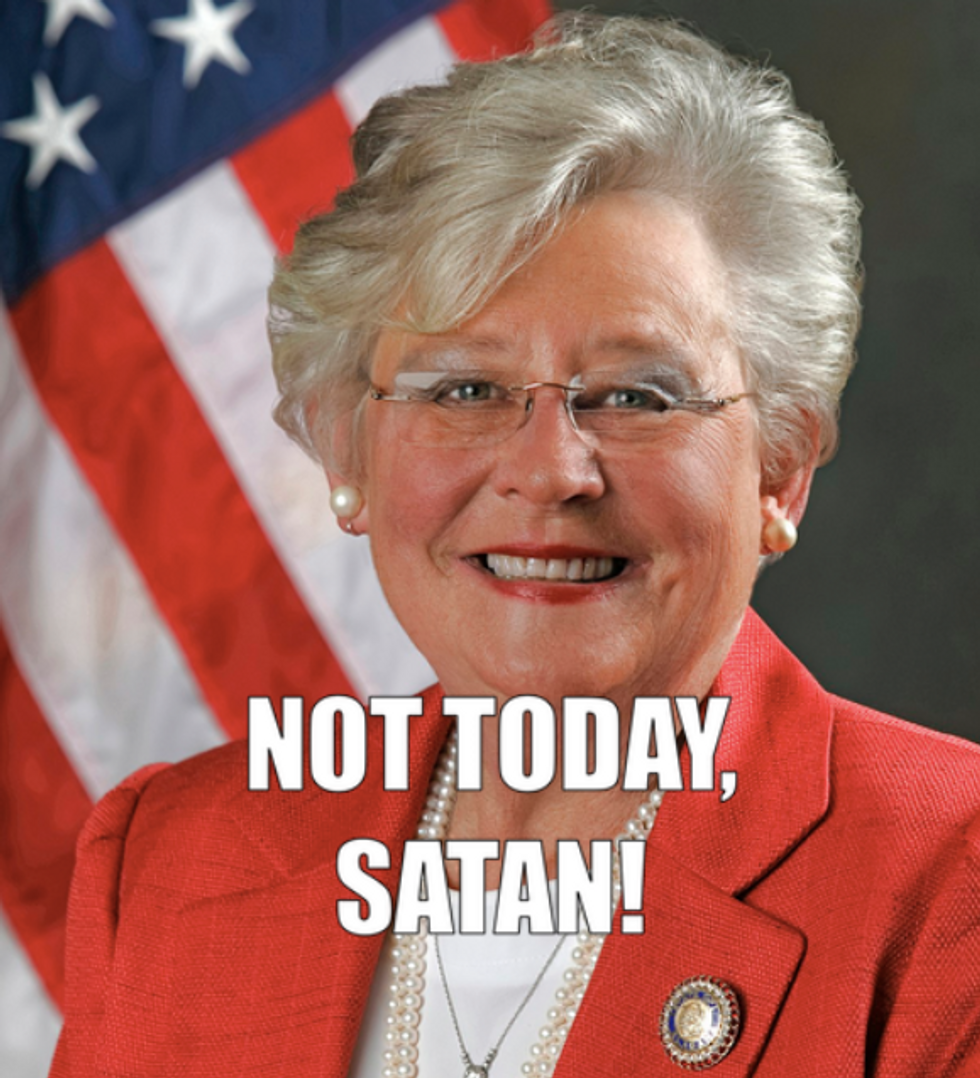 Stand back, y'all! Senator Yertle put on his thinking cap and came up with A PLAN to save Jeff Sessions's Senate seat from falling into the hands of them damn, dirty Democrats. What if Luther Strange resigns today, and Alabama Governor Kay Ivey calls a brand new special election to fill the "empty" seat! The governor can appoint some placeholder to rubber stamp whatever tax atrocity the GOP plans to ram through before Christmas, Alabama Republicans can hold a prayer meeting to decide which fundagelical without a grab-ass problem can successfully beat Moore in a primary, and then they run a new election to defeat that libturd lawyer Doug Jones!

Okay, it's a really dumb plan. They spent millions of dollars between the Republican primary and the run off, and they couldn't even dig up what everyone in town already knew. Then the Washington Post shows up, and three weeks later you've got women coming out of the woodwork to say Moore groped them and half the mall staff giving interviews saying, "Yeah, we had to ban that district attorney creep for stalking teenage girls."

So now they want that lady governor to save them from their own incompetence. All she has to do is piss off the 40 percent of her constituents who still support the pervert just as she's headed into her own re-election campaign. Surely she won't mind, right? She can just close her eyes and think of the GOP.

Well played, boys! When you phoned Governor Ivey to pitch her on your amazing plan, did you call her "Sweetheart" or "Honey"? And after she stopped laughing, did she say, "Well, bless your little heart"? We're betting she did. Did she remind you that y'all ended up in this mess because Alabama Attorney General Luther Strange was investigating former Governor Robert Bentley for corruption when he "happened" to get appointed to the open Senate seat? And that Governor Bentley added that extra year onto Senator Strange's term in direct contravention of Alabama law? Did she point out that she moved the election up from November of 2018 as part of her crackdown on corruption in Montgomery? And now you want her to go back and cook the books for you because y'all got your pink bits caught in your zipper?

NOT TODAY SATAN. NOT. TO. DAY.

"The election date is set for Dec. 12. Were [Luther Strange] to resign I would simply appoint somebody to fill the remaining time until we have the election on Dec. 12," [Ivey] said.

So it looks like Republicans are stuck with Moore. The old goat shows no signs of dropping out, despite dropping like a stone in the polls. The Alabama GOP has threatened to shank any of its own members who so much as think about mounting a write-in, which would probably just end up splitting the Republican vote anyway. And if Moore actually pulls out a win, Republicans have promised to start expulsion procedures immediately, while relying on Moore's vote to prove that Republicans can too legislate.

Good luck with that, fellas! Karma's a bitch, and she's coming right atcha!

Please contribute to Wonkette, where we always keep our hands to our damn selves!