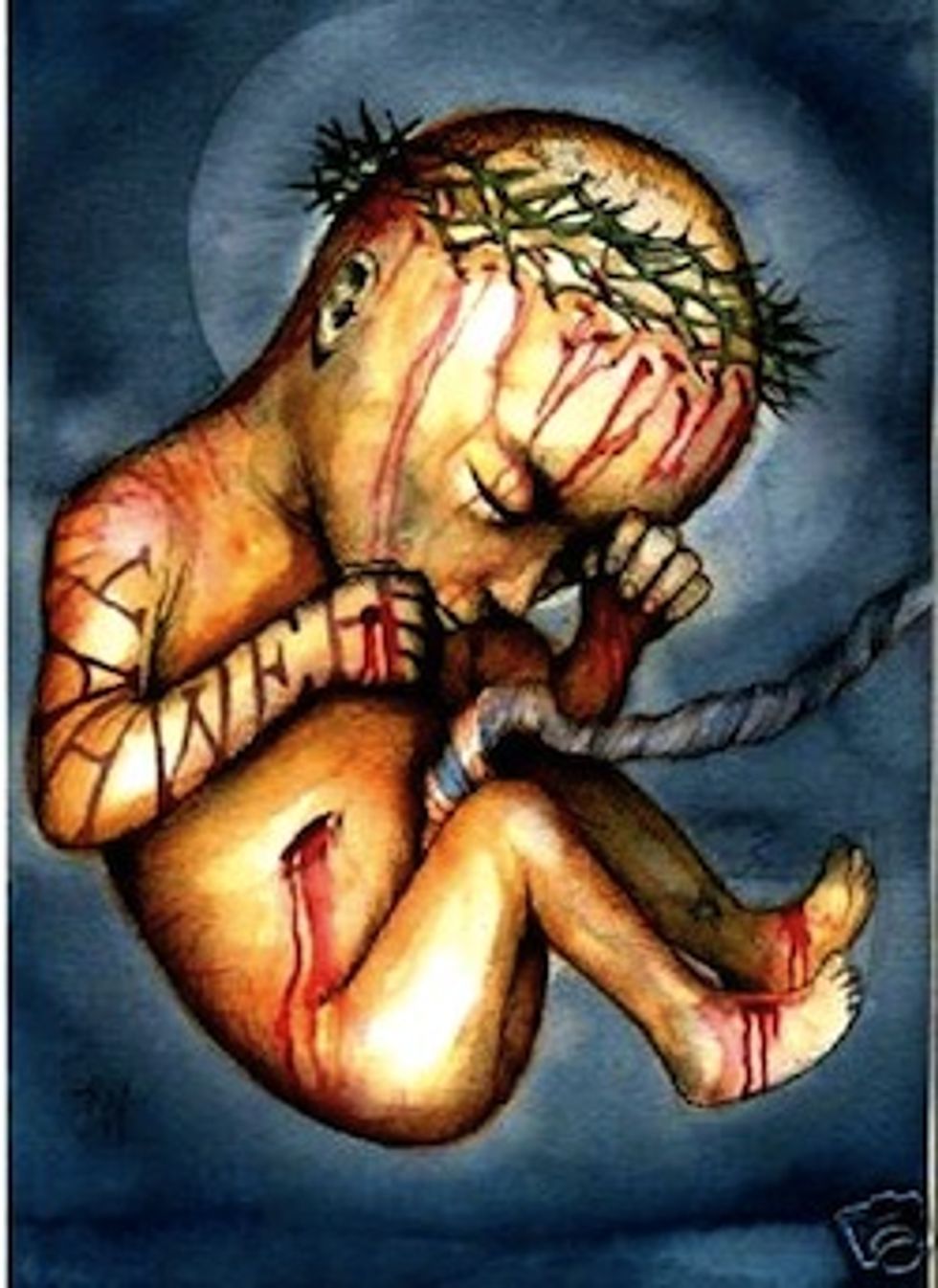 There's been a lot of talk about the Constitution lately — we must all defend it, you know,even the kids. We have a constitutional right to guns, for example, so anyone suggesting laws against rocket launchers is a tool of the devil, or at least of the Kenyan in the White House.

However, when it comes to the constitutional right to abortions (which TOTALLY EXISTS until Zombie Mitt Romney triumphantly returns to repeal Roe v. Wade), we are much more flexible.

Take Alabama State Sen. Shadrack McGill, for example: He is pulling for a fetal personhood bill in Alabama, so everybody will know that anything that comes NEAR a uterus is technically a baby. McGill is so flexible with respecting the Supreme Court's ruling that he is willing to blabber on about birds and the Book of Psalms rather than come up with a cogent reasoning for his nonsense.

So, Jackson County Daily Sentinel, what exactly is he saying about this thing?

“Just based on the Scripture alone, the Psalm that talks about God knowing us before he placed us in our mother’s womb, is enough for me to know that that is a life inside of a mother,” said McGill, R-Macedonia.

See, here's the problem — if you are going to take ancient, unverified, questionably translated tomes as literal truth, that is pretty bad, in terms of being a reasonable human being. But if you are talking about making REAL LAWS that actually govern people, and you find yourself using the phrase, "Just based on the Scripture alone," you have lost all grasp on what passes for responsibility.

Also, we did not cleverly add that "R-Macedonia" thing. That's really where he's from. Really.

As for this Psalm he's talking about, it's probably good old number 139:

For You formed my inward parts;

You wove me in my mother’s womb.

I will give thanks to You, for I am fearfully and wonderfully made;

Poetry, that is. We should definitely use it as the basis for limits on women's reproductive rights. Just don't show anybody Psalm 71:

By You I have been sustained from my birth;

You are He who took me from my mother’s womb;

And DEFINITELY don't show anybody Psalm 137:

You have to keep those parts under wraps, because then people might think the Psalms were written by some guy who was just some guy, and not actually dictating the will of the Big Guy.

He has done this before, too — last year, McGill said God would want Alabama to keep teachers' pay low, to weed out anybody who might just be doing it for the cash. Only Lord-approved poor folks, thankyouverymuch.

Don't worry though, this time around McGill did use SOME reasoning that was not religious:

“Did you know you can be charged up to $250,000 for destroying an eagle egg, but you can destroy babies in the womb?” McGill asked this week during an interview with the Times-Journal.

This is, believe it or not, actually a very tired canard of the anti-choice people, so don't go thinking McGill is creative or anything. Also, don't go thinking he is right: The fine for eggs is actually capped at $100,000 unless you are somehow also selling feathers, but there are all kinds of overlapping laws and we are not lawyers. In any case, the important point to remember is that Sen. McGill, taking time away from his job at Scottsboro Hydraulic Seals and Service, was lecturing some reporter about how we should be protecting fetuses like they were eagle eggs. Because we can just ignore case law we do not like/know about, and eagles are awesome.