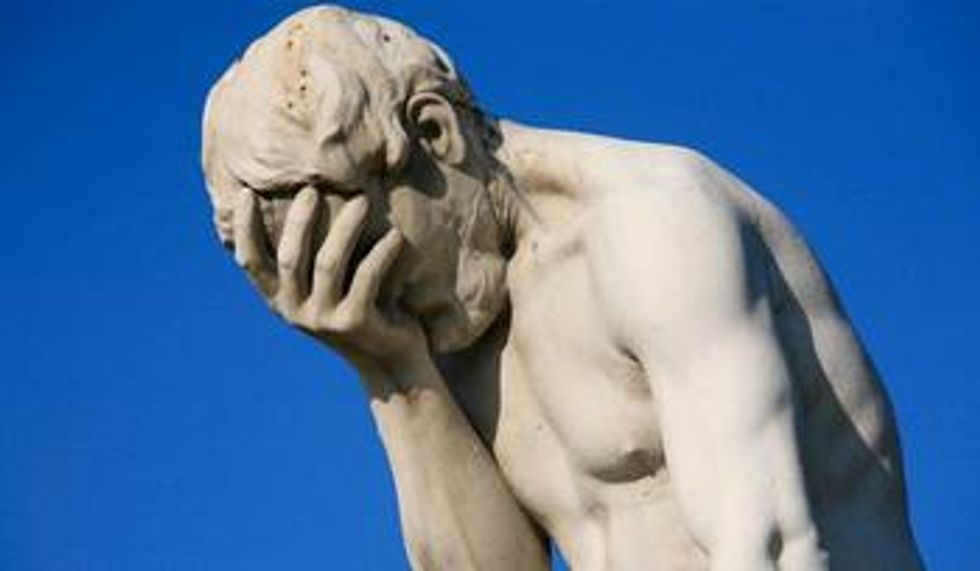 Apparently Chief Justice Roy Moore and his 'Bama Supreme Court judge pals, all of whom are clear examples of why judges should not be elected, and all of whom should be fired, would prefer that the United States Supreme Court have to stick its foot ALL THE WAY up their asses on the marriage issue, none of this "just the tip" stuff anymore, that's not at all what they like. Why? The Alabama Supremes decided Tuesday night to issue a writ of mandamus, a complicated legal-like term, which ordered Alabama's probate judges to stop issuing marriage licenses to gay couples entirely, at least for the time being. Why? Because they found a few little loopholes that will not at all be relevant when SCOTUS finishes them off in June:

The Tuesday night order — to which only one justice of the state’s high court dissented — is the result of an emergency request brought to the court by two conservative nonprofit organizations, the Alabama Policy Institute and the Alabama Citizens Action Program. In addition to ordering all probate judges to halt the issuance of marriage licenses to same-sex couples temporarily, the Alabama Supreme Court directs any probate judges who wish to do so to file a response in the next five business days as to why they should not be bound by the Alabama Supreme Court’s order.

Chris Geidner goes on to explain that the judges' reasoning, we use that word very loosely, is that since the United States Supreme Court has not YET ruled for nationwide marriage equality, and has not YET personally traveled to Alabama to administer said foot right up Roy Moore's possibly-virgin arsehole, Alabama justices are free to go ahead and decide this for themselves. And they say Alabama's marriage ban IS TOO constitutional, QED, praise Jesus! Maybe they are under the misguided legal impression that their opinion will carry weight when SCOTUS rules, which is very awwww cute, they sure do let the stupid run around without a helmet in that state, don't they?

By the way, in reading the case, we also learn that the lone dissenting judge didn't disagree because, "ew, gross, what the hell is wrong with every single person I work with?", but because, procedurally, he does not believe all the T's have been crossed (questions of standing, jurisdiction, etc.), and that the stars have not yet aligned to fall on Alabama and crush the living daylights out of every damn lezbofag in the state. He woulda, totally, but PROCEDURE, gotta follow the rules.

It appears that Roy Moore recused himself from this case, as it does not include his name. Maybe he was busy last night, hidin' in the pig run with Larry or Dale again, God knows what trouble those boys get into when they go off together. It's important to note that, as alluded to above, this case was not brought to Alabama's Supreme Court by aggrieved individuals (apparently no gays have tried to order wedding flowers yet).

To whom does this ruling apply? The Alabama Supremes say all probate judges, and that they all have five days to submit haikus or other forms of legal arguments explaining why they love the gays so much. Hopefully their letters will explain clearly and slowly that, REAL TALK, a federal judge has already ruled, on this and the Supreme Court basically affirmed it by refusing to stay the ruling, so STFU.

AL.com also explains that Don Davis, the probate judge in Mobile County, has to do a special thing for the corns on the toes of legal scholarship that sit on Alabama's Supreme Court:

The order also gives Mobile County Probate Judge Don Davis until Thursday to argue why he should not be bound by the order. Davis has asked the court to dismiss him from the lawsuit because he had been ordered by the federal district court to issue licenses to same-sex couples.

Hopefully Judge Davis will refer to Judge Callie V.S. Granade's original ruling, and her subsequent affirmation of that ruling, the one where she explained that she is a FEDERAL judge (that's ranked above state, for the non US-Americans out there), that her ruling stands, and that Don Davis should please do what she fucking said already.

In essence, this is all the beginning of Gomer's Last Stand, we guess. While the rest of the world moves on apace, the poor, shriveled justices on the Alabama Supreme Court believe that Judge Granade's ruling has driven Alabama into such "chaos" that they must step in and do their jobs to restore order for all the poor, confused winguts of the state. Confused by what, we don't know. Maybe they can't figure out whether Alabama marriage equality means they get to marry their same-sex siblings now or not. Wonkette can help:  the answer is NO, you can't marry any of your siblings in Alabama, that is a cruel stereotype, but it's still cool to marry your first cousin, as long as y'all's got different junk what comprises your Down Theres.

But no cousin double-dick marriages! NOT IN ALABAMA! (Until June, shhhhhhh, Alabama boys, Supreme Court got you covered too.)