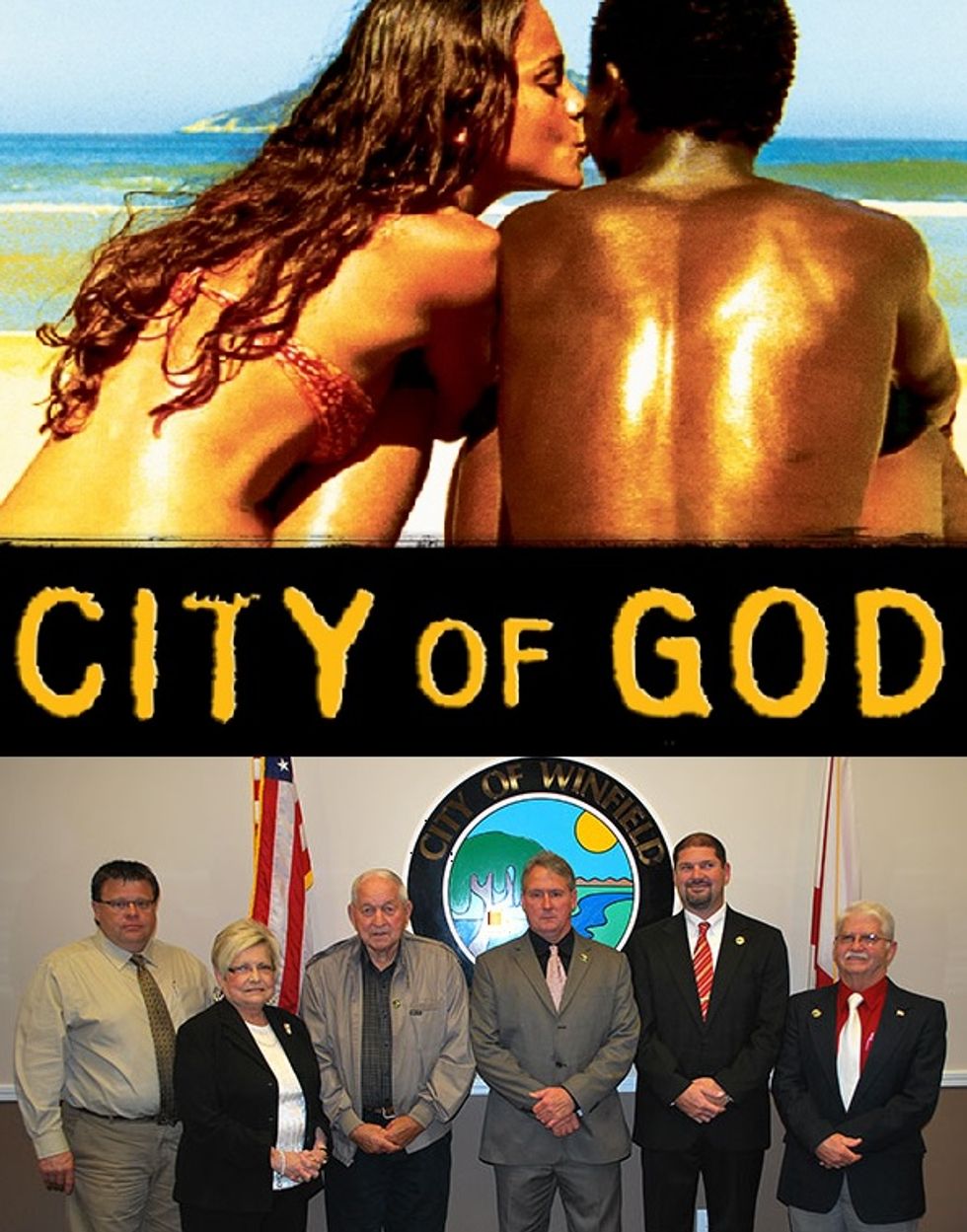 In a real estate deal of questionable legality, the City Council of Winfield, Alabama, recently passed a resolution declaring that Winfield is a "City Under God," a necessary step because, as Mayor Randy Price said, the state and country are in "an awful condition." The Marion County Journal Record expressed its approval in an editorial -- it's behind a paywall, but Hemant Mehta helpfully provides a screenshot:

In addition to the language echoing the 1954 addition to the Pledge of Allegiance, the resolution also stated that the city is the actual property of the Almighty. Yr Wonkette phoned Mayor Price, who emailed us a copy of the full resolution:

Whereas we acknowledge God is the owner of the City of Winfield and that it is a City under God. We acknowledge that at all times, He is in control.

Whereas, we acknowledge that through His leadership, the Mayor and City Council will seek his wisdom and knowledge to be good stewards of the city.

Whereas, we acknowledge that though prayer, with His guidance and presence, that we will be able to trust that no problem will be too large or too small to overcome.

Whereas, we acknowledge that the City of Winfield is where it is today because of God's grace and mercy.

Whereas, we acknowledge that at all times and in all circumstances, His will shall be done.

Whereas, we acknowledge that to God be the glory.

Not surprisingly, news that an elected city council has declared the town to be a fully owned subsidiary of God -- who is in control at all times, thus begging the question, "What the hell does God need the city council for?" -- is raising a few eyebrows around the interwebs. Mayor Price told us that local reaction was almost entirely positive except for one Facebook post he knows of but hasn't seen because he doesn't have Facebook. He did acknowledge the story had "hit the fan with all the atheists" on the internet, but he does not anticipate any legal issues to result from the resolution. Price also told a reporter for the Alabama Media Group that he isn't bothered if the council's actions offend anyone, explaining:

I'm going to step on a lot of people's toes but there's not but one God and, that one God, to Him be the glory ... There's no other way; there's no other God. There are a lot of religions out there but only one God.

Yr Wonkette is no civil liberties attorney, but it doesn't appear to us that the resolution would actually fall afoul of the Establishment Clause. It looks like an especially preachy version of the forms of "ceremonial deism" that courts have said is OK, especially since the resolution doesn't specify any particular sect. We have to admit that saying the whole town is "owned" by the Almighty seems a bit iffy, but unless the council claims to have gotten a signature on the deed, they're probably all right, maybe? The resolution could certainly make for an interesting exhibit somewhere down the line if it turns out the city is giving preference to Christians in hiring or contracting -- not that anyone with the wrong religious affiliation would ever want to apply there in the first place, because don't those people know they're not welcome?

The editors of the Journal Record thought the resolution was a pretty good idea, and opined that the separation of church and state is kind of a dumb idea anyway: "We think that the whole fuss about cleaning God from the spector [sic] of public service has been much ado about nothing.” On the other hand, it might be fun to see how open the city is to all expressions of faith. Surely our pals at the Satanic Temple would be willing to set up a holiday display in downtown Winfield next winter?

We'd also like to add that the City of Winfield is actually where it is today because of zoning, most likely. They should probably double-check that.