Alex Jones: Michelle Obama Murdered Joan Rivers So She Wouldn't Tell Anyone About Her Dick 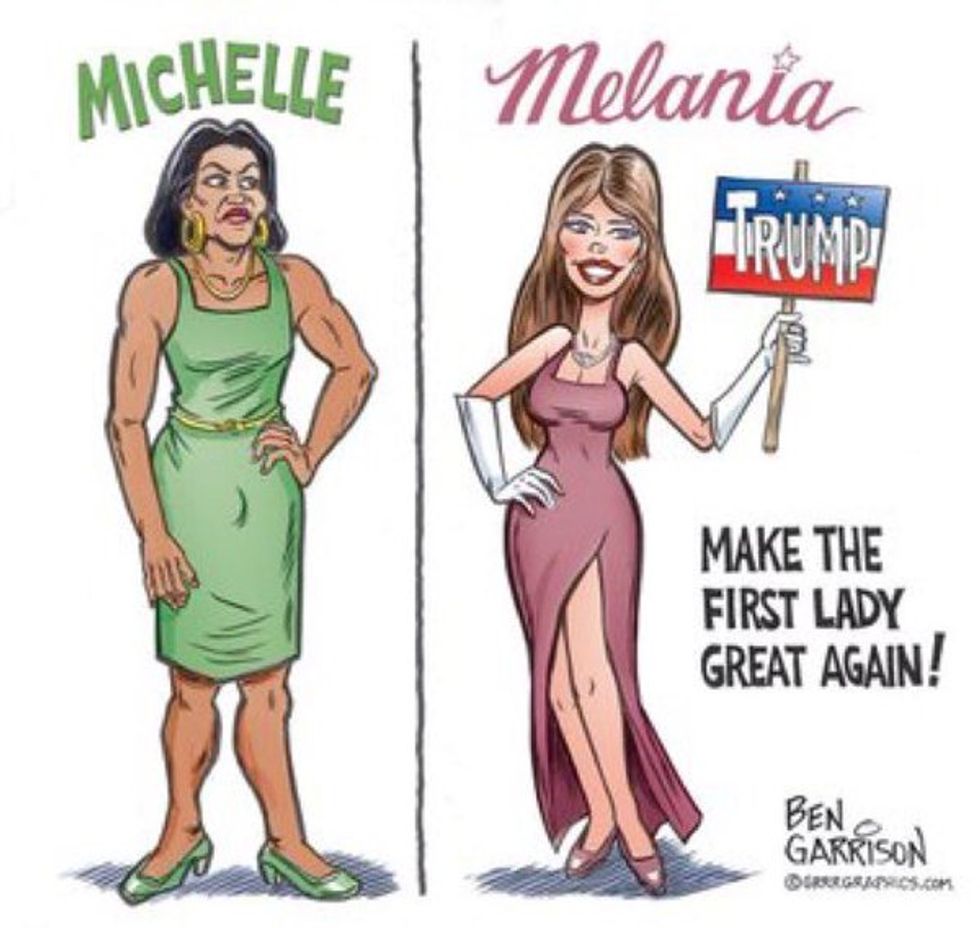 Alex Jones, who thinks Donald Trump should be president, has a fancy new conspiracy theory that is obviously very much rooted in facts and reasonable thoughts and conclusions. Behold!

In this latest vid, Jones is upset about two things! ONE, that mean lie-berals are calling cartoonist Ben Garrison a racist for this totally not awful cartoon that he did about how super awesome it would be to have a First Lady who gives him a boner, just like Barbara Bush did.

Jones is also upset about President Obama wanting trans people to be able to go potty, because of course he is. AND HE KNOWS WHY. The reason President Obama loves trans people so much is because, as he has stated many times before, Michelle Obama is trans. He knows this, he says, because a SCIENTIST told him that her shoulders are too wide, and also one time he saw a "pooch" that made it look like to him like maybe she had a penis. Apparently, FLOTUS transitioned very early on in life, before the age of 2 or whenever this picture was taken.

Jones then explained that this is common knowledge for basically EVERYONE, including mainstream liberal sites he does not get around to naming. And also Obama was "raised by a tranny" in Indonesia, where they're "into all sorts of stuff." That part is true! As to the rest of it, Jones then says it has to be true because there are so many videos on YouTube saying it is true. And proving it with SCIENCE!

“The national media takes it when I talk about this and acts like I’m crazy ... Listen, there’s hundreds of millions views on YouTube.”

As we all know, YouTube only allows FACTS, like this one video I saw of a lady who says she is a "starseed" (meaning she is part alien), and the one I showed you last week of Michael Jackson explaining why he was murdered by the Illuminati.

BUT SPEAKING OF MURDER ... Jones is now claiming that Michelle Obama had comedienne Joan Rivers MURDERED like a common Hillary Clinton because Rivers called her a "tranny" and she was afraid that Rivers would reveal her secret.

“Don’t forget,” Jones explained, in all seriousness, “the famous comedienne Joan Rivers said, ‘Of course everyone knows she’s a tranny.’ She’s dead serious, ‘She’s a man.’ Deader than a doornail in a routine operation where basically she had fire poured down her throat and was a fire-breathing goblin. Dead on arrival. Shoot your mouth off, honey, you will die. HEH HEH HEH HEH HEH...LIBERAL!”

Well, clearly the facts are all there, how could it be any other way. The only strange thing is ... how is Alex Jones still alive? I mean, he is the one going around dropping all these truth bombs about people being killed for reasons related to things he believes, AND YET HE LIVES. Somehow! As if by magic!

“I really think — her daughters don’t look like her — I really think this is some weird hoax they did again, just like he didn’t get sworn in on the Bible, it was the Quran. All this weirdness, I mean, I used to laugh at this stuff, but man, it’s all about rubbing our noses in it. And I think it’s all an arranged marriage, it’s all completely fake and it’s this big sick joke because he’s obsessed with transgender, just like some weird cult or something. I think Michelle Obama is a man. I really do. I really do. I believe it.”

YES, just like he got sworn in on the Quran. Because that is definitely a thing that happened in real life. Pretty much all of Obama's presidency has been dedicated to rubbing Alex Jones's nose in the fact that he is a SECRET MUSLIN and Michelle is a SECRET PENIS-HAVER without ever just coming right out and admitting it. For reasons! Probably just to make Alex Jones look crazy, even though he is clearly a very reasonable human whose good sense led him to believe that Donald Trump is the best possible person to be President of the United States, and that Michelle Obama had Joan Rivers murdered so no one would find out that she was born with a penis.