All About the D*cks: Your Florida Roundup 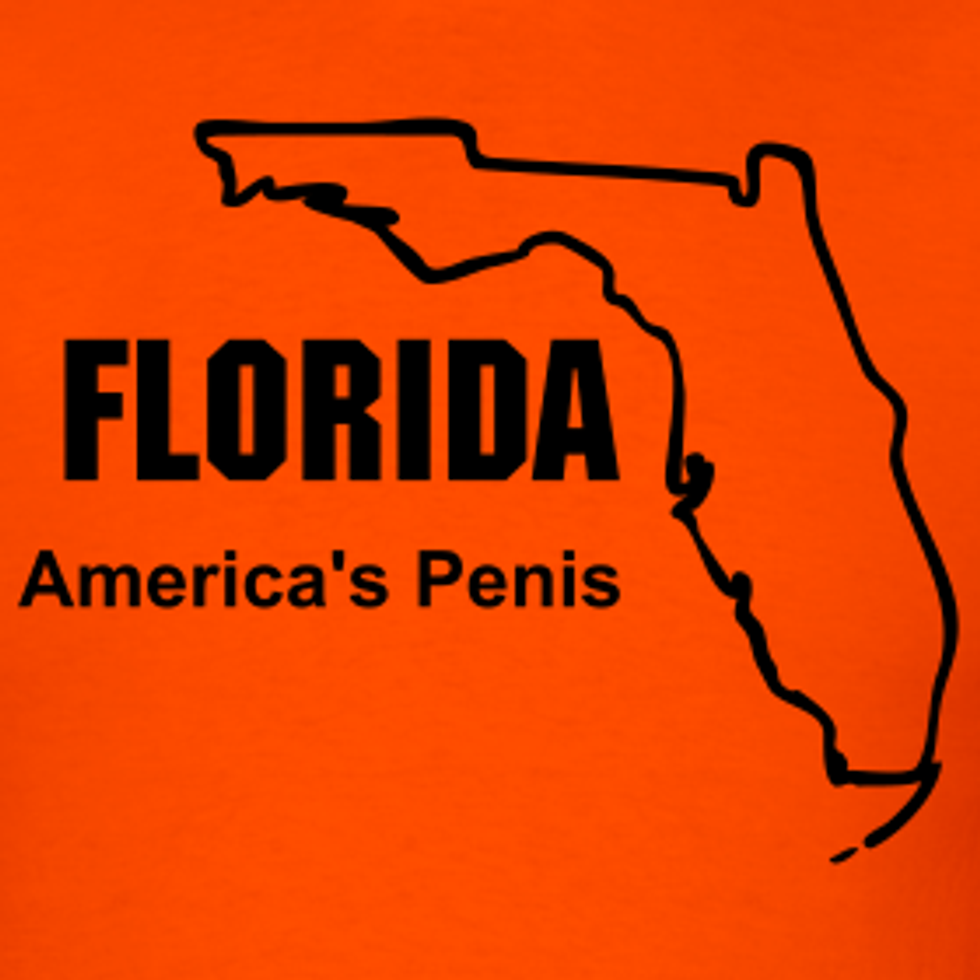 Of course the first person to receive a dick-reduction surgery hails from the state that looks like a dick. Of course he does. The unnamed 17-year-old, whom we’ll call Richard, was apparently … how to say? … wider than he was deep. Seven inches long, 10 inches in circumference, about the size of a grapefruit — while flaccid. That’s a thick piece, dude.

Too thick, actually. The doctors said it looked like a football which … just sounds all kinds of wrong. And he apparently didn’t get any bigger when he got hard. The thing just inflated like a balloon. He couldn’t have sex or play sports or wear pants, and for 17-year-olds two of those things are very important. Richard got the condition after several bouts of priapism, a condition that usually affects Florida gray-hairs who’ve OD’d on boner pills.

The surgeon who treated the teenager, Rafael Carrion, a urologist at the University of South Florida, told MailOnline: 'There comes a time in every urologist's career that a patient makes a request so rare and impossible to comprehend that all training breaks down and leaves the physician speechless.

'That question was "can you make my penis smaller"?'

The doctors did not take final measurements of the penis, although Dr Carrion told MailOnline the result was 'generous'.

'It's slightly longer and slightly thicker than the average male, but now it looks symmetrical, and the patient was very satisfied,' he said.

The teen now has no problem having normal erections and has full sensation.

'It looks cosmetically appealing, and he said it was a life-changing event, he's all smiles,' said Carrion.

A decade or so ago, back when W. was making holy war on Saddam and mangling the English language, his younger brother was our fine state’s governor, and despite his name — seriously, what the fuck is a Jeb? — somehow got a reputation as the “smart one.” By comparison, maybe. Jeb’s IQ is probably in the triple digits, and we’re fairly certain he can pronounce nuclear. But that doesn’t make him any less of a dickbag. Oh sure, Jeb has pissed off the nuttiest of the right-wing nutters by supporting Common Core and occasionally speaking Spanish and not wanting to deport every Mexican he sees. But as governor he also couldn’t execute people fast enough, ended affirmative action, straight-up fucked the state constitution to create a state voucher system until the Supreme Court told him no, was a shill for Big Business, signed Stand Your Ground, and did lots of other stuff conservatives drool over. Oh, and there was that Terri Schiavo fiasco, a master class in fucked-upedness.

Anyway, Jeb’s bid to become the third Bush to preside over a recession hit a couple of snags this week, so in the spirit of the moment, let’s all point and laugh:

Jeb Bush, a rumored 2016 Republican presidential candidate, just decided to publish hundreds of thousands of emails sent to him during his time as governor of Florida. On its face it seems like a great idea in the name of transparency, but there's one huge problem: neither Bush nor those who facilitated the publication of the records, including the state government, decided to redact potentially sensitive personal information from them.

"In the spirit of transparency, I am posting the emails of my governorship here," a note on Bush's website says. "Some are funny; some are serious; some I wrote in frustration." Some also contain the email addresses, home addresses, phone numbers, and social security numbers of Florida residents.

Yeah. People are a little pissed about that.

But the bigger tech-related screwup was Jeb’s decision to hire as his chief tech guy the douche-bro founder of hipster.com, who, and we couldn’t have seen this coming, is something of a prick who makes ha-ha funny jokes on the Twitter about sluts and gays who undressed his hot ass with their eyes at the gym. After he was hired, on Monday, he began trying to scrub his account of the tweets Team Jeb deemed inappropriate. But then people noticed, and on Tuesday he resigned.

Jeb did not have a good week. Here’s to hoping it’s a trend.

Perhaps you remember Katy Perry’s exercise in nationally televised lip syncing a few weeks back, and those stupid dancing sharks she gyrated with during that one song that sounds exactly like all those other songs whose names we can’t remember because we don’t care? And perhaps you remember how one of those sharks was apparently drunk or unaware of the choreography and kind of improvised, which was the best part of the entire performance that wasn’t Missy E?

Of course the left shark thing has circled back to Florida.

The disagreement was sparked when a Florida-based 3D printing and figurine design company turned the shimmying blue sea creatures – made immortal by a performance in which one of Perry’s two accompanying dancing sharks appeared to lose track of his dance moves – into a 2.7in figurine.

Perry’s lawyers were not pleased.

The company’s lawyers responded that a) you can’t copyright costumes, so shut up, and b) even if you could, it’s not clear that Perry owns the copyright, so go away.

Take the Money and Run

Florida lawmakers have this One Weird Trick to make jobs, jobs, jobs: more or less, it’s give money to megacorporations — we call it incentives — and hope for the best. And so 14 months ago, the state awarded Office Depot a $5 million incentive package to keep its corporate HQ in the state.

Office Depot is packing up its corporate bags and shipping out of the Sunshine State, but not before scoring millions in state and local taxpayer incentives.

The Boca Raton business giant announced Wednesday that Staples Inc., its chief office supplies competitor, is buying the Fortune 300 company and moving its South Florida corporate headquarters out of the state.

It’s unclear exactly what the future holds for its 2,000-plus employees.

That’s all for this week from Florida, where Yr Humble Correspondent is feeling a bit under the weather, and is rather concerned about the shape of his member.