All Hail The Sacred MAGA Hat, Object Of Religious Devotion, No, Really 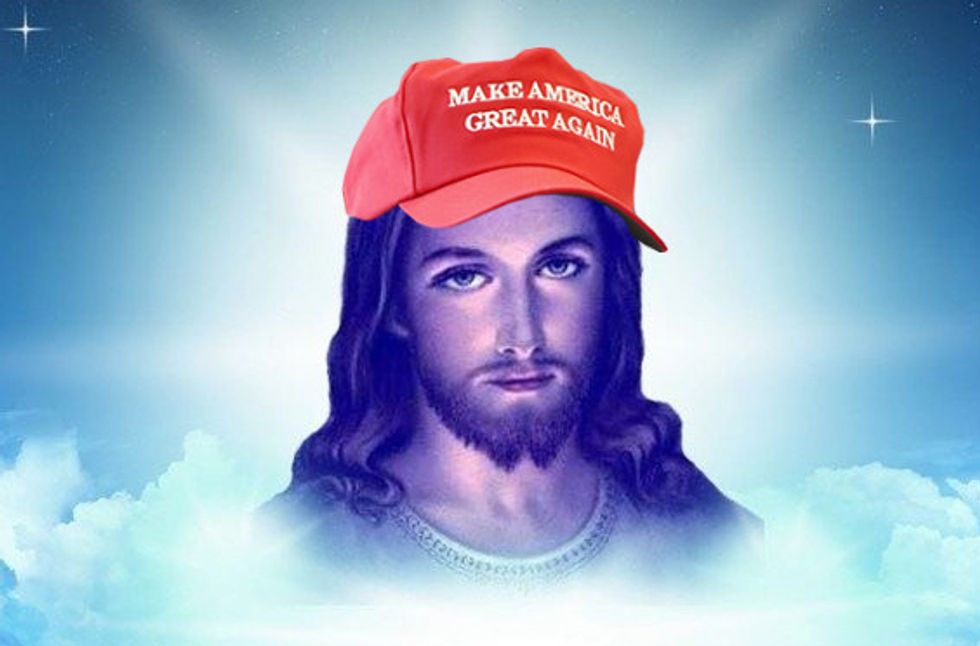 The sky does not work that way, Mr. Jesus.

Donald Trump may not know anything about conventional expressions of faith, as we know from his references to Two Corinthians and how much he loves to drink his little wine and have his little cracker. But he certainly believes in and venerates Donald Trump, so it shouldn't be any surprise that a plaintiff in a very sketchy lawsuit against a bar is claiming not only that he was discriminated against for wearing a stupid "Make America Great Again" hat in a Manhattan bar, but also that his stupid "Make America Great Again" hat is a signifier of his religious belief in Making America Great. Therefore, you see, he's a victim of religious discrimination, and why isn't the ACLU taking his case for free, huh, HUH?

As Gothamist reports, poor oppressed Philadelphia accountant Greg Piatek sued a West Village bar, The Happiest Hour, back in March, claiming that staff had refused him service, called him "a terrible person," and eventually had him thrown out by a bouncer just because he was wearing his Trumpian headgear. That aggression would not stand, man, so he sought redress through the Manhattan Supreme Court. Attend, all, to this terrifying tale of discrimination against an American who simply loves America the most:

According to Piatek's lawsuit, he visited The Happiest Hour with two friends after a day devoted to visiting the 9/11 Memorial Museum, where, according to the lawsuit, they ruminated on "the memory of victims and fallen heroes of the September 11th, 2001 attacks." Piatek's group were initially served drinks, but he claims he was ignored when he attempted to order a second round, allegedly receiving only "a lengthy death stare" from one bartender.

Piatek claims the customers to his immediate left and right were served numerous times while he waited; when he finally spoke up and asked to be served, a bartender allegedly replied "Is that hat a joke?"

Piatek initially claimed that he was obviously singled out for his "sincerely held set of beliefs in which he felt it was necessary to wear a particular hat in remembrance of the souls who lost their lives and as a symbol of freedom/free speech."

In a new memo, filed after the bar moved to have the case tossed, Piatek's attorney argues the court is obliged to regard the dipwad as a member of a "protected class," since his beliefs have religious significance that "entirely transcend the political realm," don't you know. The lawsuit cites as precedent a previous holding by the court that parents who didn't want to get their kids vaccinated didn't necessarily have to belong to an anti-medicine church for their beliefs to be recognized as "religious" in nature.

The bar's attorney, Preston Ricardo, is asking the court to throw out the case altogether, noting that Piatek's claim he had suffered "the most discriminatory, humiliating and 'Saddest Hour' of his life" was undercut rather a lot by the just under 20% tip Piatek left, which is right there on his damn receipt, as included in the August filing when Ricardo sought to have the case thrown out:

Yr Wonkette is no lawyer, but that amount of liquor for three people doesn't look like a single round of drinks, either, even in Manhattan. Maybe the MAGA crowd drinks differently after a visit to Ground Zero, which renders the little crackers in need of far more than a little wine for communion to work. Ricardo told Gothamist this latest motion by the plaintiff was "entirely fanciful" and that Piatek's arguments

have no support in the law. And they continue to show that the action is nothing more than an ill-conceived publicity stunt guised as a lawsuit.

So if it's a thoroughly frivolous suit intended mostly for the sake of publicity, does that not prove even more thoroughly that Piatek wishes to emulate his object of worship, Donald Trump? Or does Piatek need to go on Fox News and complain the judge is a Mexican first?

If it turns out that a MAGA hat truly is a sacred icon, we encourage you to order your own Wonkippah, our beautiful "Impeach" cap, which is surely the Unitarian-ish alternative. Behold the state of spiritual ecstasy it brings to the average Wonkette Toddler!

Did you know you can click through this picture to BUY THIS HAT???

Yr Wonkette is funded 100% by reader donations, and 0% by bogus lawsuits. Please click here and help support the Temple of Zoom.