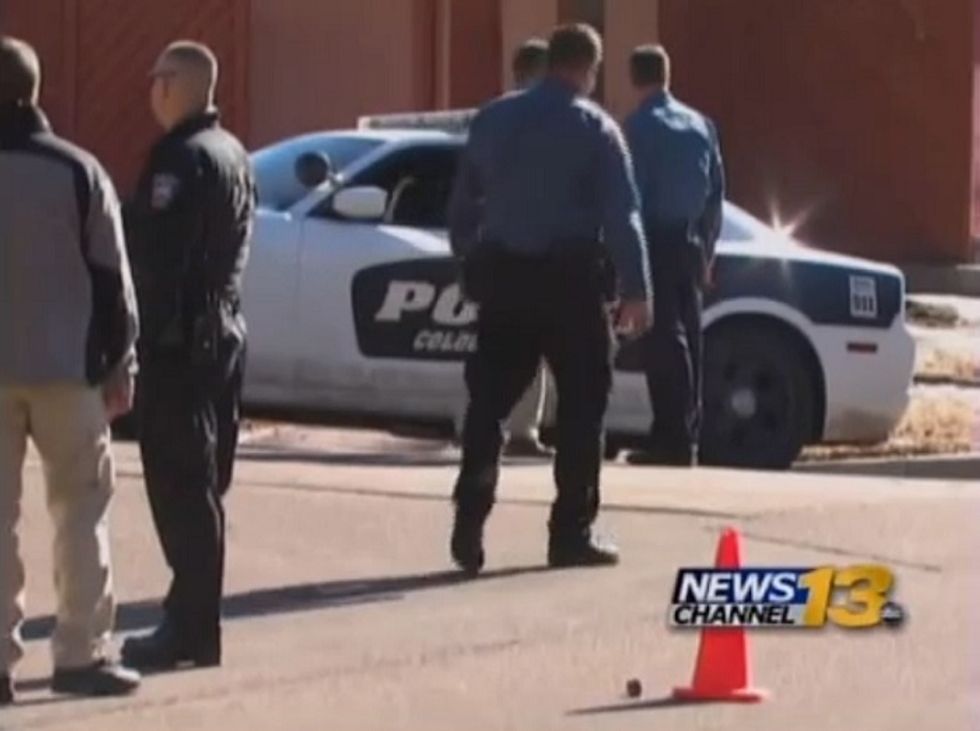 We've got all sorts of international and domestic terrorism for you this morning; please make use of kitten photos as needed. In Paris Tuesday, 12 people were shot to death at a satirical newspaper that had frequently run cartoons making fun of Islam:

Masked gunmen shouting "Allahu akbar!" stormed the Paris offices of a satirical newspaper Wednesday, killing 12 people, including the paper's editor and a cartoonist, before escaping in a getaway car. It was France's deadliest terror attack in at least two decades.

French Interior Minister Bernard Cazeneuve said security forces were hunting for three gunmen after the noon-time attack on the weekly Charlie Hebdo, whose caricatures of the Prophet Muhammed have frequently drawn condemnation from Muslims.

Charlie Hebdo sounds a bit like a French version of Wonkette, only with a bigger budget and an actual art department, as this tweet indicates:

And now the editor and 11 other people are dead for making rude jokes about religion. We'd just like to remind our deleted commenters that should they have any objections to our work, we're happy to run them in the Dear ShitFerBrains column.

Needless to say, what's truly horrified American conservatives about the attack is not that religious fanatics murdered a dozen people because they felt that their holy whatevers had been insulted, but that the White House took entirely too long to characterize the attack as "terrorism." The Weekly Standard was shocked and horrified that Press Secretary Josh Earnest hedged just the slightest bit on classifying the attack. A CNN reporter had pressed Earnest over his description of the attack as "violence," and asked, "Do you see this as an act of terrorism, and is this something that has to be condemned on that level?" Earnest's answer -- hedging like every press secretary in the modern era -- apparently signals to the Weekly Standard that Americans are simply not being protected from evil, and was apparently so shockingly weak that it had to be put in boldface:

Based on what we know right now it does seem that's what we're confronting here. And this is an act of violence that we certainly do condemn, and if based on this investigation it turns out to be an act of terrorism, then we would condemn that in the strongest possible terms, too.

Best part of the Weekly Standard piece? this note at the bottom:

And now we can get ready for the careful parsing of that statement to determine that Obama actually approved of the attack that he condemned, and explaining that calling it a "terrorist act" is actually far weaker than calling it a "terrorist attack." [contextly_sidebar id="QxFYqz1ueUGjv10GDLnKh0ySZ3jvEqY7"]As we know, it's somehow weak when this White House says it's "appalled" and downplays the brutal murder of an American by merely calling it a "brutal murder." Let's take a look at the weak, mom-jeans wearing Obama statement on the Paris attack:

I strongly condemn the horrific shooting at the offices of Charlie Hebdo magazine in Paris that has reportedly killed 12 people. Our thoughts and prayers are with the victims of this terrorist attack and the people of France at this difficult time. France is America’s oldest ally, and has stood shoulder to shoulder with the United States in the fight against terrorists who threaten our shared security and the world. Time and again, the French people have stood up for the universal values that generations of our people have defended. France, and the great city of Paris where this outrageous attack took place, offer the world a timeless example that will endure well beyond the hateful vision of these killers. We are in touch with French officials and I have directed my Administration to provide any assistance needed to help bring these terrorists to justice.

Well that's pretty wimpy all right. Why is he talking about free speech and bringing the terrorists to justice when he should be pledging to eliminate Islam altogether?

Meanwhile, back on our shores, it looks like somebody wants to Race War like it's 1965 all over again. Local police and the FBI are investigating the attempted bombing of an NAACP office in Colorado Springs yesterday; an "improvised explosive" was left against the wall of the building next to a can of gasoline that was not ignited when the small bomb went off. Henry D. Allen Jr., president of the Colorado Springs chapter of the NAACP, has criticized law enforcement following police killings of unarmed blacks, and speculates that someone may have wanted to take their dislike of the NAACP to a new level, what with the organization failing to recognize that we now live in a postracial America, as this rather cheesily produced local news story reports:

We just like the clumsily spliced shot of the neighbor saying "Why would somebody want to hurt 'em?" at 1:35.

Police are looking for a possible suspect, a balding white man in his 40s driving a dirty white pickup truck, which may only describe a quarter of drivers in Colorado Springs. As of yet, we haven't seen any complaints on Fox or Breitbart about the failure to treat the bombing as a terrorist attack, but we're sure they'll eventually find the story, especially if the suspect turns out to be illegally grazing cattle somewhere.

The important thing to remember, of course, is that the terrorists in France are typical of all Muslims, while the terrorist in Colorado is a freakish violent lone wolf whose attempt to burn down a building with people inside of it is completely different from decent rightwing folks who merely identify the NAACP as the most racist organization in the USA.