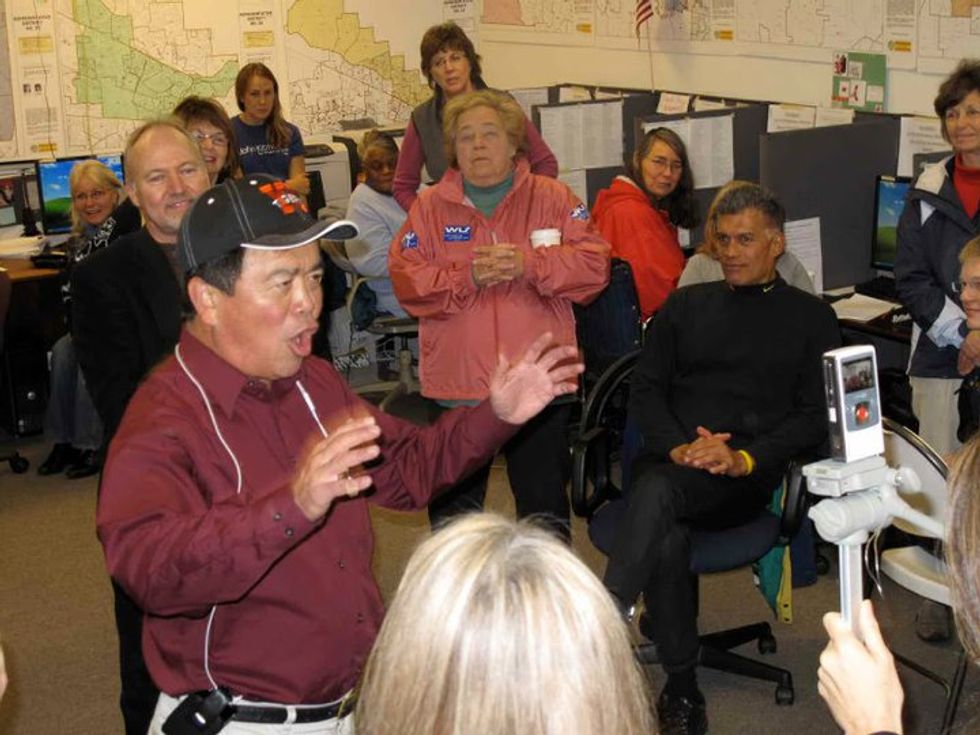 Congressman David Wu of Oregon did some interesting things right before his re-election in last year's midterm elections. He allegedly wandered around Oregon like an insane person, for one. Also, it appears he sent his staff e-mails like an insane person, along with photos of him dressing up like some kind of tiger furry. Wow! That's one sex crime from the Wonkette Trifecta! (He was charged with a sexual assault, but that was in college.) Wu's campaign is said to have "essentially shut down" when staff and his psychiatrist staged an intervention and he refused to seek help, so most of his team resigned. Oh, and as for the furry costume? His spokesman called it "a moment with his kids," but his spokesman didn't comment on the e-mails to congressional staffers it accompanied, which seem to have been written by a drunk Wu in the guise of his children. Someone's in the running for a "World's Best, Sanest Dad" mug!

Whether the photo depicted a staged or real event is uncertain. Someone who appears to be Wu is in the full-body tiger costume. He is face-down on a made bed with his arms at his side, as if asleep or passed out.

A wallet and headphones are strewn next to him on the bed. Behind him, a child who appears to be Wu’s 13-year-old son stands beside the bed dressed in a T-shirt and khaki pants with his hands on Wu’s shoulders. It is not evident whether the boy is trying to wake his father, give him a back rub or play along with a joke.

Six minutes later, at 1:38 am, a fourth email arrived in staffers’ inboxes. The content related to Wu’s drinking. The subject line contained one word: “wasted.”

The email, with Wu’s son’s name at the end, said: “My Dad said you said he was wasted Wednesday night after just three sips of wine. It’s just that he hasn’t had a drink since July 1. Cut him some slack, man. What he does when he’s wasted is send emails, not harass people he works with. He works SO hard for you … Cut the dude some slack, man. Just kidding.”

The account of all of this, uncovered by the Willamette Week, is really pretty awesome if you forget for a second that this is some kids' dad.

Here's a description of Wu's walkabout:

For some staffers, the beginning of the end was Wednesday, Oct. 27, when Wu delivered a belligerent and rambling 19-minute monologue to Washington County Democrats that some in the audience said was inappropriate for the friendly crowd. His behavior left staff members aghast.

That Thursday, on a downtown Portland sidewalk in front of Central Drugs, several staff members pleaded with him to get into their car for a private intervention. Wu refused and took off on foot. His campaign staff could only watch helplessly, afraid what their candidate might say or do.

Thankfully, this happened in Portland, so even if he was, say, urinating on a dog, it probably fit right in and even won him votes.

In 2007, he took to the House floor to deliver a speech about Vulcans. He seemed to think Star Trek is real?

In conclusion, here is a photo of Wu in his office. There's a whole Facebook photo gallery of him walking around town with these earphones around his neck for no reason.

Here he is photobombing Kathleen Sebelius at an event where he reportedly pestered her to call his children on his phone:

And here he is posing with a bird furry. CASE CLOSED. (Allegedly.)