America Decides 2010: What Does IHOP Stand For, Anyway? 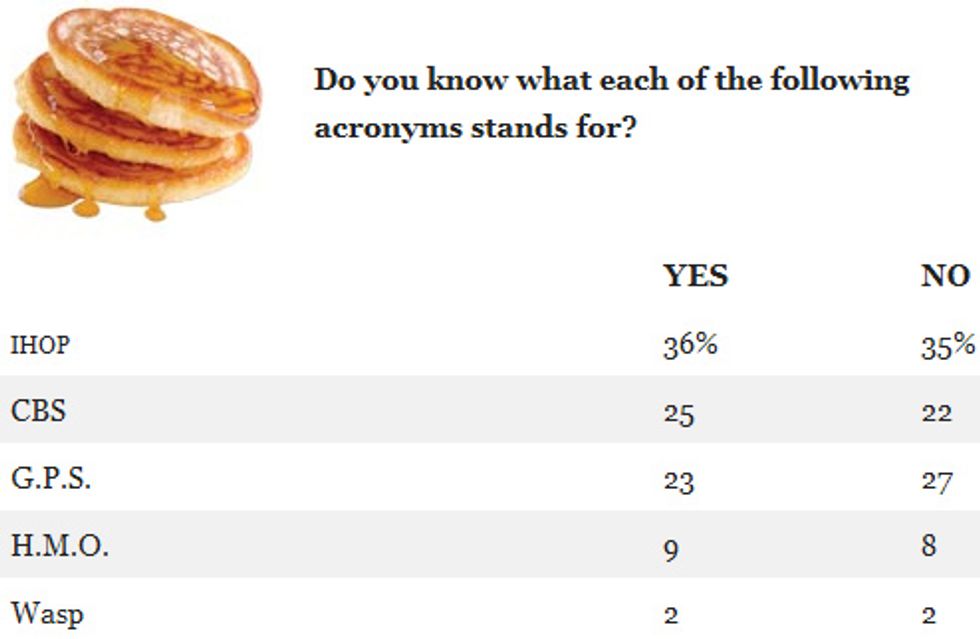 On the eve of the most important midterm election of the year, the combined cultural powers of teevee's60 Minutes and the movie-star magazine Vanity Fair have again delivered a poll that tells us not only what Americans think, but what they are.

Do we really want to live in an America where sixty-four percent of people can't find the International House of Pancakes because "IHOP" is too confusing? What if they accidentally slopped into the H.M.O., wanting pancakes, and instead were sent to the Death Panel by Michelle "Not the Good Candy Witch" Obama?

Other actual questions on this current events poll include "Would you rather work in the pretend office of teevee's The Office (American version) or that Mad Men show most Americans have never even heard of?" (The most popular answer, at 39%, was "Neither") and "Would you cut off your arm if, through some freak accident, you got off your ass and took bicycle trips through the wilderness and got your arm stuck under some kind of big weird thing somewhere and somehow there was not cell-phone service, like this would happen to a slob sitting on their couch talking to a pollster commissioned by Vanity Fair and CBS News to ask inane questions about things currently advertised on the Internet?" [Vanity Fair]

(Yes we are aware there are ads for this movie on Wonkette, and we are thankful to have them! That guy did a really good Allen Ginsberg in that Howl movie, which is actually the first movie your editor has seen in a theater in about three years! Had to look at the floor during the animation, though -- except for the Moloch City of the Damned part near the end, which was stunning. The stuff actually looks great as still images, which makes sense because that's what Eric Drooker does for a living, illustrate these sinister cityscapes. Something about the animation, though. Too computer-y? Anyway, remember to vote or whatever! It depends upon it!)