Americans Going To Vote For GOP Even Though They Prefer Democrats 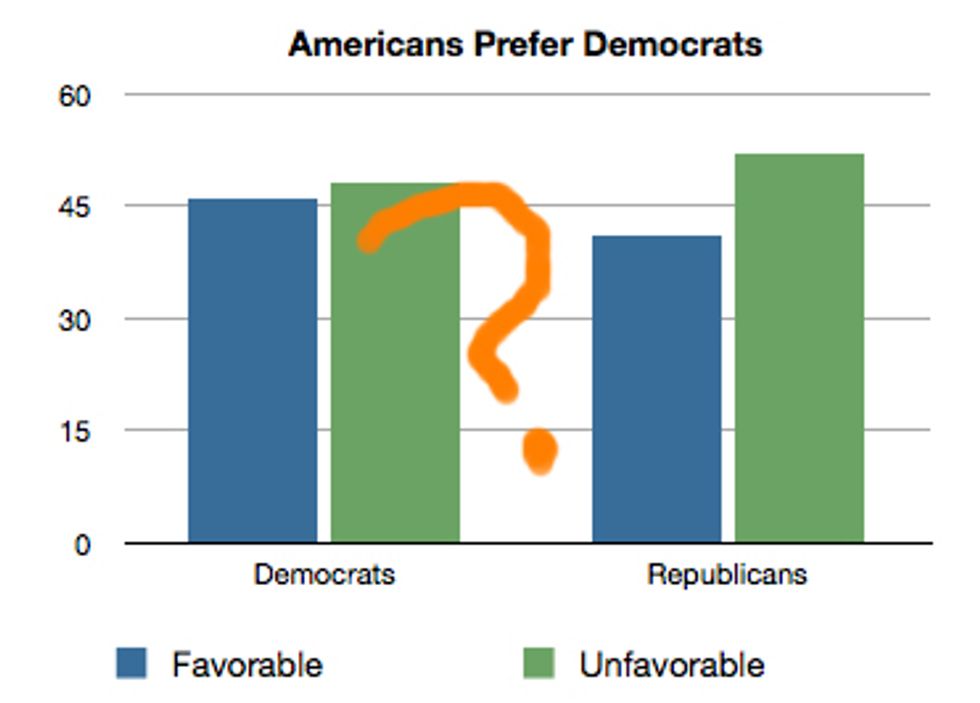 The New York Timeshas a new poll about the midterms out today, and, surprise, it seems people are more likely to vote for Republicans than in 2008. "Republicans have wiped out the advantage held by Democrats in recent election cycles among women, Roman Catholics, less affluent Americans and independents," they concluded. What does this "less affluent Americans" thing mean? Less affluent than women and Roman Catholics? Less affluent than "Bo Obama"? Oh, right, that's probably just their way of saying "people who don't read The New York Times." Anyway, this sort of looks bleak for Democrats, no? But, as Matthew Yglesias points out, it turns out voters in this poll actually say they have a more favorable opinion of Democrats than Republicans. Huh?

So what is it? Do people just hate Obama?

Yet nearly 60 percent of Americans were optimistic about Mr. Obama’s next two years in office

Oh, no, and actually they also give him higher approval ratings than the Republican Party and than Democrats in Congress.

So what is it? Do they just feel compelled to vote against the party in power because the economy is bad?

nearly 70 percent said the economic slump is temporary. Half said the economy was where they expected it would be at this point, and less than 10 percent blamed the current administration for the state of the economy, leaving the onus on former President George W. Bush and Wall Street.

Wait, that blame Bush stuff is actually working with these people and their short attention spans? Then why would these people vote for that party?

In a follow-up interview, one poll respondent, Judy Berg, an independent from Morton Grove, Ill., said she voted for Mr. Obama in 2008 because she was “looking for a change,” adding, “the change that ensued was not the change I was looking for but something totally out of left field.”

Ah, there we go. Barack Obama got Americans addicted to this idea of all-solving "change" that would fix everything forever. Now the public will just haphazardly switch parties every two years from now on, jonesing for that sweet, sweet change fix. WE HAVE BECOME THE KENYAN DRUG ADDICT WE ELECTED. [Yglesias/NYT]