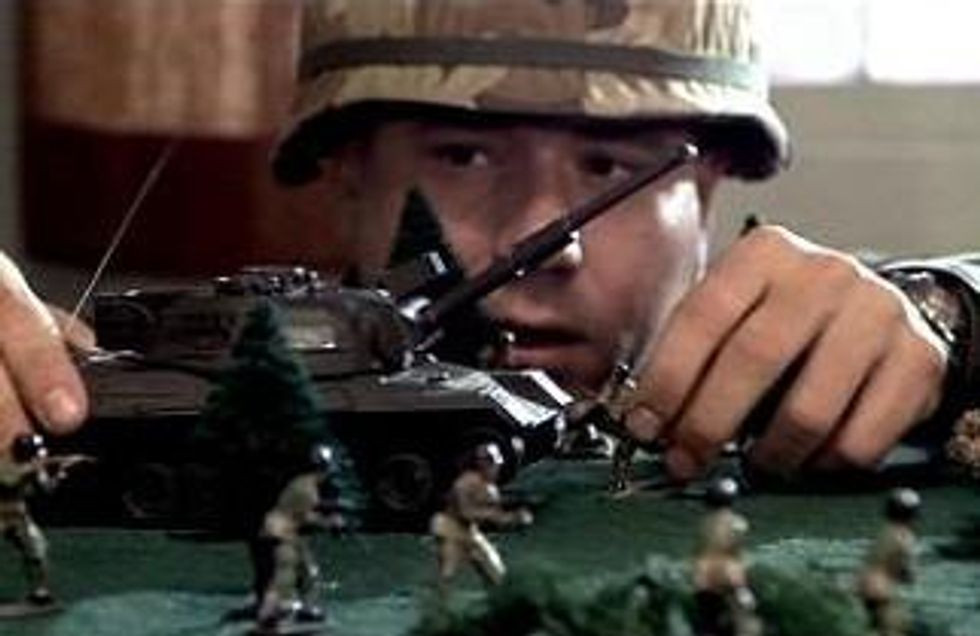 Hey, here's somebody we haven't heard from in a while! Must be Bid For Relevance Week for losing GOP candidates! Retired Army colonel and failed Florida Rep. Allen West, whom you may remember from his unabashedly patriotic efforts to protect America from communist tyranny by pushing for the installation of a military junta. He's back though, sputtering nonsense as a Fox News contributor — it was his only choice, really, since he lost his seat in the House to some accountant and is now too old to get paid for his only marketable job skill, murdering people. Oh, sure, there's always "mall security guard," but it's just not the same.

The question at hand, in case you have been for some reason not been paying attention to it because you ARE A BAD PERSON, is how to deal with the U.S. military's 25,000ish annual sexual assaults, on account of the U.S. military is clearly not doing anything. One proposal with a lot of momentum is to remove the officers above the victim from the investigation process, to prevent meddling and cover-ups and all sorts of nastiness.

Of course, Allen loves nastiness: When Savage suggests the reform is being pushed by "Khamer Rouge feminists" who are planning a "coup," West responds not with "simmer down, that's a little nuts even for you," but with "You are absolutely right." And he continues, sort of:

When you start to have this interjection of, you know, political, you know, will against, you know, the military, good order and discipline, where you start to try to usurp the commanders' authority and I guess replace it with some type of political, legal officers, and things of that nature. Then the next thing you know, it goes from just dealing with this, you know, sexual assault thing to, you know, making decisions on the battlefield.

Translation: "I am against an independent Department of Defense committee for investigating sexual assault because I do not trust hippie feminists to STEAL MY TANKS AND DRIVE THEM AT THE ENEMY.

Also, in case you missed it: West has the stainless-steel gonads to look at thousands upon thousands of sexual assaults and express concern that liberals are going to mess with "military good order and discipline."

There is an assault against the United States military.

This is the man who received more than $12 million in donations for his reelection. To Congress. He's trying to somehow blame sexual assault on letting gay people into the Army, and can't even manage to draw the connection.

And here is a brief overview of some of the bile-soaked hairballs Michael Savage coughed up, to the vociferous agreement of our heroic colonel:

The list could continue indefinitely, but the point is made: These are all perfectly acceptable opinions to Allen West, who was an Army commander until he was forced out for throwing a child into a pungee pit or whatever.

Check out the full transcript if you want — you'll find all kinds of charming nuggets about how, if West was overseeing your unit, you might have to report your sexual assault to a guy who thinks it isn't a big deal, and that women don't belong in combat in the first place, and that it's all Obama's fault anyway, and that if you don't want to be sexually assaulted, you shouldn't "believe G.I. Jane is not just a movie."

So yeah, picture that guy standing in the middle of your rape case. "Oh, I'm going to just vacate any convictions that come out of this process anyway. BLAME IT ON THE MARXISTS."

There are surely cases of admirable leadership in the combating of the military rape parade — but when military sexual trauma is GETTING ITS OWN DIAGNOSIS, there is clearly something wrong. That something is that the actual leaders are outnumbered by the Allen Wests.