gay marriage poll pt No Cake For You scotus

Americans Cool With Gay Marriage, But The Gays Should Not Have Cake Or Flowers 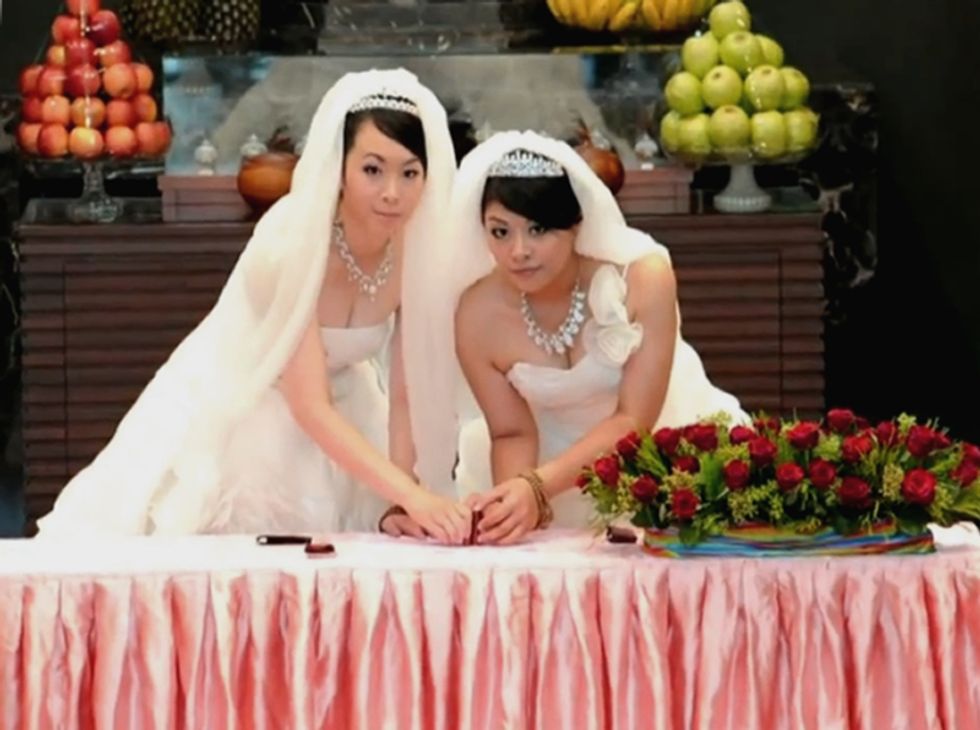 A new AP-GfK poll was released Thursday showing that a majority of Americans (44 percent) favor legalizing gay marriage in their home states, while 39 percent oppose it, and 15 percent don't favor or oppose it (really?). So, way to go, um, 44 percent of Americans! Also, America is apparently split down the exact middle on the issue of whether the Supreme Court should rule that gay marriage is constitutional when it reviews the issue later this spring, so half of you are fine, and the other half of you are meh and should not receive any of the fabulous wedding invitations.

Before you start celebrating this nice news, though, check this out. A pretty big majority (57 percent) believe that wedding-related businesses should be able to be all, "No, gross, we will not provide you with our religious wedding flowers because your gayness violates our right to practice our religion. Which is being a straight florist." Also very distressing: Half of Americans (50 percent, what, you didn't believe us?) believe that state and local officials who issue marriage licenses should be allowed to say, "Although it's literally my job to issue marriage licenses according to state law, I believe that the way you personally do sex is icky, and therefore, I exempt myself from doing my job, which I get to define as being a non-gay person who hands out non-gay marriage licenses to non-gay people."

According to Dave Kenney, who is some Catholic rando from Michigan who got interviewed by ABC, gay marriage, although extremely gay, is fine with him. He doesn't think The Gays should be able to choose just any florist or bakery, though, because that is going a little bit too far.

"Why make an issue out of one florist when there are probably thousands of florists?" he asks. Yeah, The Gays, why would you even want to make your shopping decisions based on price or quality or design aesthetic? It's more fun to play Guess The Religious Bigotry Level of Your Local Business Owners! We think if the owner is a fundagelical, the display window will not be on fleek, but sometimes it can be hard to tell.

Dave Kenney continues, "The gay community wants people to understand their position, but at the same time, they don't want to understand other people's religious convictions. It's a two-way street." The Gays, you should just go from store to store, trying to understand other people's religious convictions and whether those convictions will allow them to sell you some flowers or cake from their businesschurches. Also, you should pencil in a bunch of time to interview all of your local license-granting officials to make sure that you do not totally gross them out. Wow, The Gays, you are going to have to really plan your time carefully, what with all of the religious understanding you're going to have to do while you also are planning your wedding.

Would you like some more fun facts from this poll? 75 percent of us do not support the Tea Party, which is so outstanding, plus 67 percent of us are not evangelical born-again Christians. So that information is quite enchanting! And only 45 percent think abortion should be illegal in most or all cases, which makes us go hmmm. U.S. America seems kind of pro-choice and pro-The Gay-marriage, which is kind of weird, because WTF are we doing, electing all of these wingnuts to Congress? Just kidding, please do not write to us about gerrymandering and voter turnout, We Totally Know.