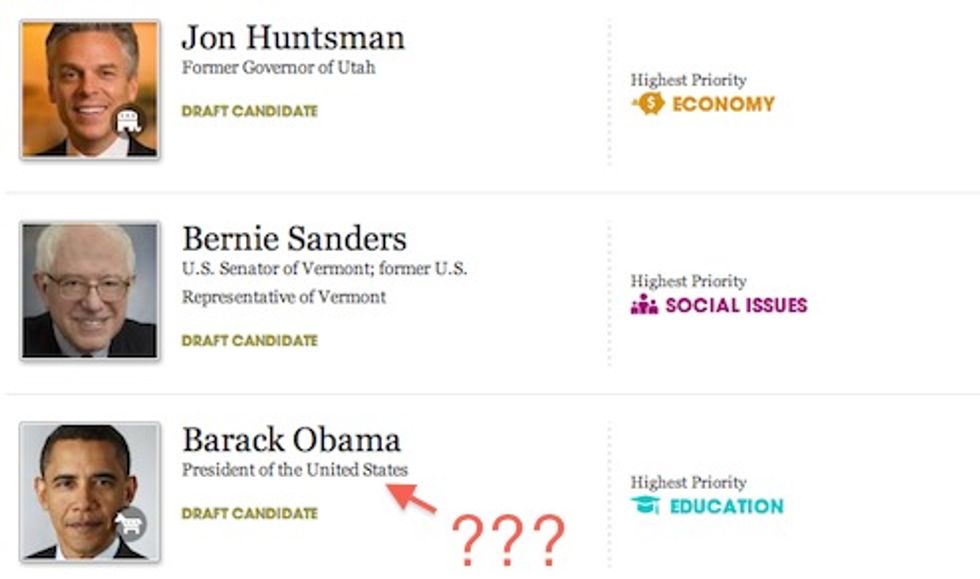 Americans Elect, the organization that tried to get America to nominate a centrist third-party candidate using the futuristic World Wide Web, has basically admitted defeat. Yes, in America, an idiot can become president, but a well-meaning yet mysterious group of people who took the time to actually get on the ballot in 27 states cannot make a website that actually works. Via Politico, the Americans Elect organizers said Tuesday that, basically, Americans are very interested in nominating a third-party candidate, yet when we say Americans we really mean the 18,000 or so Americans who were able to use our website without wanting to stab themselves in the eye. "There is...an almost universal desire," said Kahlil Byrd in a statement that appears on the website, "among delegates, leadership and millions of Americans who have supported AE to see a credible candidate emerge from this process." "Millions," that is optimistic. Anyway, it looks like there is technically a "leader" in all this, and his name is..................Ron Paul. Jon Huntsman is in second place with a whopping 3,834 votes, followed by Bernie Sanders and in fourth place, BARACK OBAMA.

Americans Elect have had Geek Squad at their house for like 268 days, and once they figure this out, they would really like you to go back on the website (first, make sure your computer is powered ON) and try again. Still not clear who exactly wasted $20 million plus on a website that doesn't work, but of course that didn't stop the Ron Paul supporters from finding their way into every text box on the website; they are computer-savvy.

The only identifiable monied person behind Americans Elect so far is a finance guy named Peter Ackerman (the organization also employs his son, Elliot, to save money). But there are all kinds of influential people involved in Americans Elect; they just all seem to be in finance, which can't be that helpful, can it, after the initial wire transfer is complete?

Byrd says Americans Elect plans to have "conversations" with its millions of supporters and come to some conclusion (Barack Obama for Third-Party President 2012).

Every step of the way, AE has conferred with its community before making major decisions. We will do the same this week before determining next steps for the immediate future. AE will announce the results of these conversations on Thursday, May 17.

In the meantime, there is a big thing on the Americans Elect website of a winking George Washington that encourages you to "give a buck" to the "organization," to help the board members pay their taxes or something.

Well that was fun. Who would YOU elect, Americans? [Politico]