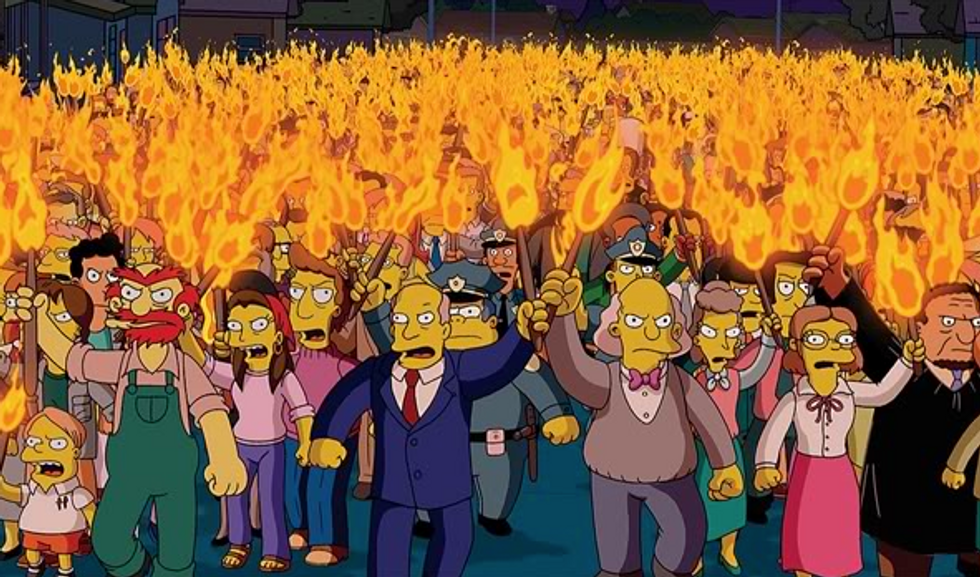 They're coming for you, GOP

So, because Republicans are lazy as fuck and stupid as hell, they are always looking for ways to not do their jobs. See, for example, newly minted Republican Kim Davis, the moronic martyr of Rowan County, Kentucky, who is super into not doing her job, for Jesus, and more importantly, for the $80k annual salary she cannot possibly afford to give up by resigning her job because freelance cunting doesn't come with benefits. See also, for example, the Republican Congress, forever trying to hop a plane out of town even when there is still work to do, because YOLO or FOMO or FU or whatever.

Republicans are currently trying to call in to work with a bad case of Planned Parenthood. And if they can't pass a budget that defunds the organization's half a billion bucks a year for cooter and titty-lump checking -- and they can't; Democrats will block that all day long, and twice on Sunday, and President Obama has this here veto pen he's itching to use just in case -- the nihilist wing of the Republican Party plans to hold its breath until it turns gay, and up yours, America, GOVERNMENT SHUTDOWN.

But no, up YOURS, you burn-it-down mofos, says America. In addition to a new Quinnipiac University Poll showing 69 percent of voters — including a majority of Republicans — oppose shutting down the government over Planned Parenthood, which we told you about on Monday, there's this extra bad news for the GOP:

The latest national poll by the Pew Research Center, conducted Sept. 22-27 among 1,502 adults, finds that 60% say that any budget deal must maintain funding for Planned Parenthood, while 32% say that any agreement must eliminate funding for the organization.

If lawmakers fail to agree on a budget and the government does shut down, more say the Republicans (40%) than the Democrats (26%) would be more to blame; about a quarter (23%) volunteer that both sides would be equally to blame.

Allow us to break that down for you as if you are a Republican member of Congress, with the intelligence of a bowl of lukewarm rat piss. See, the majority of Americans want Congress to spend tax dollars on Planned Parenthood because otherwise, where will everyone go to get their weird rashes and late periods checked, huh? This is a very confusing concept for "pro-life" conservatives to grasp, because of how they are, like their Republican identical cousins, lazy as fuck and stupid as hell. They are all befuddled in their heads by the very strong bipartisan support of Planned Parenthood, that has increased in recent months, because how is it possible that reg'lar People-Americans are more concerned about easily and affordably getting their sexparts taken care of than they are about videos floating around on the interweb, of people saying bad things about Planned Parenthood?!?!

But see, the truth is that Americans do not want Congress to spend tax dollars on shutting down the government, at an approximate cost of $125 million a day, until Republicans tire themselves out, cry "Uncle Sugar!" and then take their ba-bas to bed for a nice long nap. That is a stupid dumb waste of money, and everyone would rather spend it on funding Planned Parenthood, like they have already said a million trillion times, sheesh!

Do you get it? It's really not that hard to understand, unless you are an amnesic congressional conservative who has already forgotten how the Great Shutdown of 2013 turned out for the GOP. It turned out flippin' bad, yo, and everyone got all kinds of mad at Republicans for doing that. Which is what the soon-to-be-former Speaker John Boehner has been trynna tell these morons, as even his wine-drenched brain somehow vaguely recalls how much that shutdown sucked for his party. Thus, he has been making drunken belch sounds like, "Uh, let's not this time, m'kay?" But the True Conservatives do not care, they are like "No, not m'kay and SHUT UP, Boner, go away, you suck!" And because he is so sick of their spunk, he has surrendered and agreed to run his own orange ass straight outta town. Yay, the nihilists win, now it's time to burn, motherfucker, burn!

This is going to end badly for Republicans. Either party leaders encourage (read: bribe) just enough Republicans to back down from the whole Planned Parenthood thing, and they'll all look like a bunch of sissy-faced losers. Or they'll succeed in shutting down the government, costing taxpayers hundreds of millions of dollars and also pissing them the hell off, and then back down and look like a bunch of sissy-faced losers. No wonder John Boehner wanted to take this job and shove it right down his gullet, with a nice box of wine as a chaser.