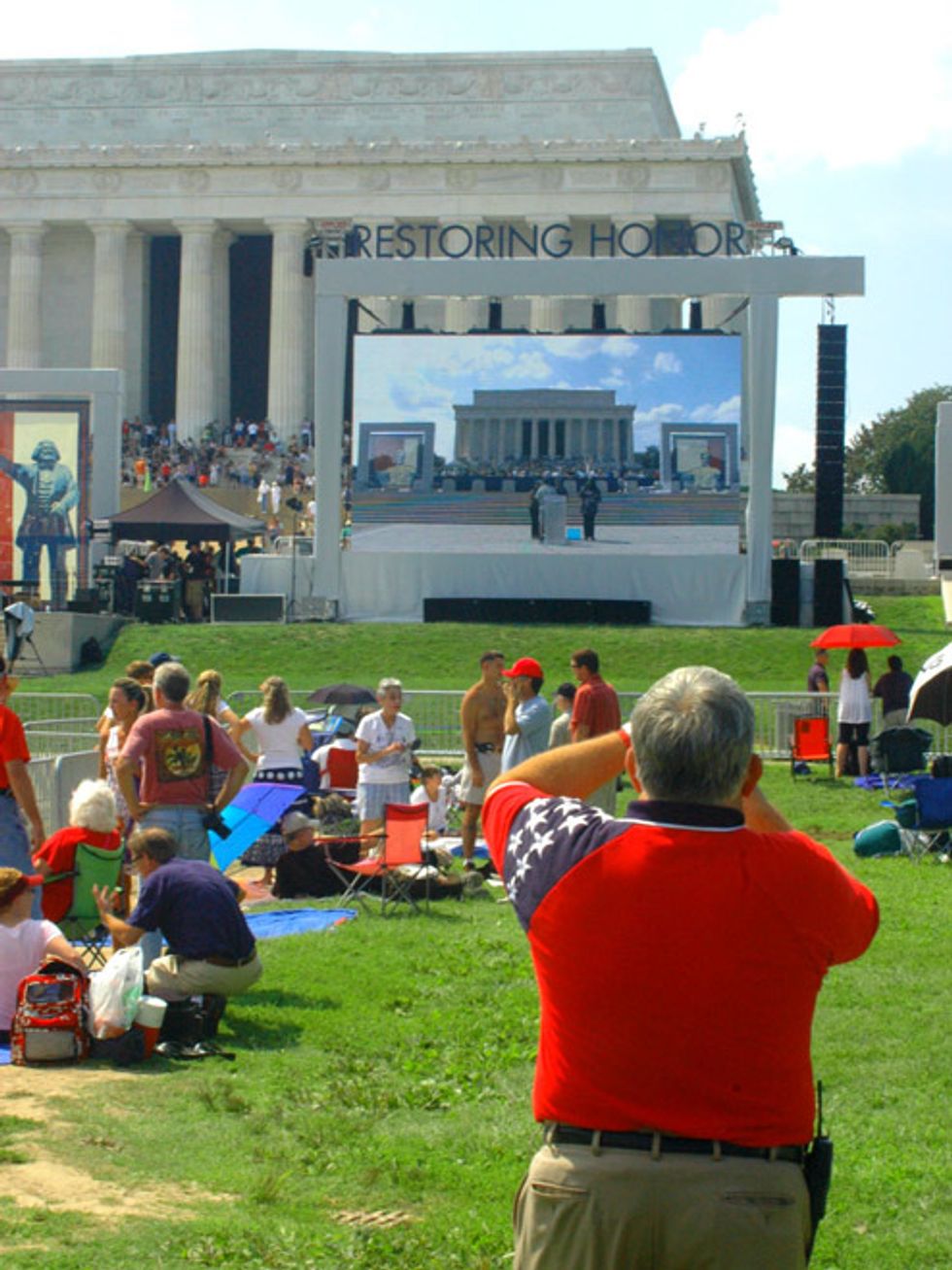 Oh, ye Armies of the Night! Rise up ... or, hell, just remain seated. Remain seated, ye lardbottoms, and also stick to daylight hours, so you don't run into each other, on those ridiculous scooters paid for by Socialist Medicare. Wonkette's photographic war correspondent Dana Ryan is already just cold shooting pictures of the most historical/miraculous event ever, which starts tomorrow we think?

The Lincoln Memorial is truly a beautiful and inspiring setting for any rally at Our Nation's Soviet Capitol, which is on the other side of the National Mall. Is there anything that could improve the dramatic visuals of the majestic Greek Revival temple with its Doric columns and solemn Colossus seated within?

How about putting up some shitty posters with childish caricatures of Lincoln, to block the actual Memorial from the wilting gaze of the wilted attendees? It's an idea so stupid, it just might work! (If by "work" you mean, "hide the Lincoln Memorial, lest it distract from the radiant beauty of Glenn Beck.")

Oh hell, why not just put up a giant banner with a crappy picture of the Lincoln Memorial on it, and put that in front of the actual Lincoln Memorial? And then hang some Nuremberg-style banners of ... Karl Marx? Let's say Karl Marx.

Insane? Well perhaps it is, perhaps it is ... and perhaps the Muppets were insane, too. Or, as John Hodgman wrote in The Areas Of My Expertise:

This was a movie about puppets who go to Hollywood to become stars. As they travel, they frequently consult the script of the movie in order to know what to do next. When they reach Hollywood, they begin making a movie about the movie the viewer has just been watching. The puppets build plywood simulacra of props that, earlier in the film, were represented as real. Then the roof of the soundstage smashes in and a powerful rainbow shines down and obliterates everything, including a plywood imitation of the fake rainbow that had appeared in the first scene. The frog and bear and pig simulations panic as the fake/real and real/fake worlds nearly destroy each other. The puppets then look directly into the camera and instruct the viewer that "life's like a movie: write your own ending."

Are we reliving the counter-culture classic Easy Rider right now, as freedumb's just another word for nothing left to lose? All they wanted, was to be free. And that's the way, it turned out to be.