And Finally, the Best Midterm Election Analysis: It Was 'Toy Story 3' 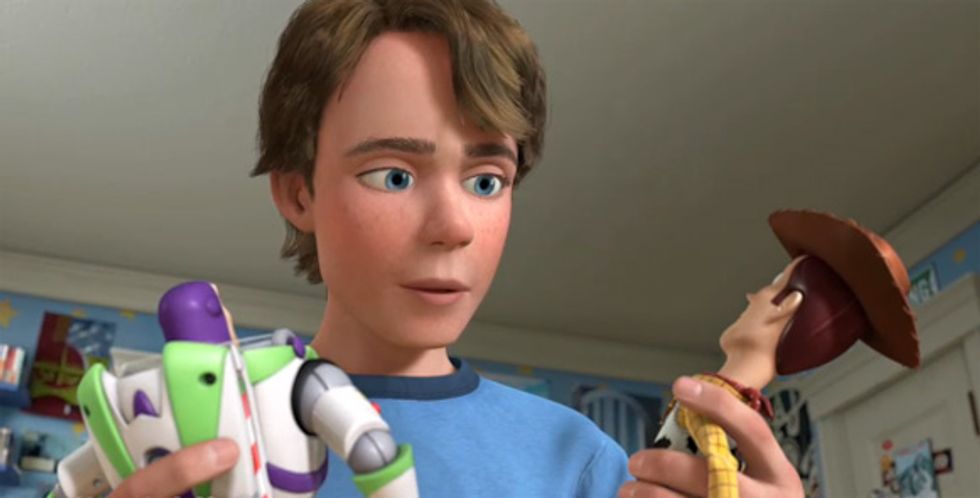 Andrew Klavan is a screenwriter of crappy crime movies and no longer has a job writing for Pajamas Media, so obviously his editorials are taken VERY SERIOUSLY by theLA Times. So when this man says the complex, nationwide, real-life event known as the 2010 midterm elections are merely an allegory of Toy Story 3, this is something that is printed in an actual newspaper. Good work, America! You perfectly recreated the plot of an animated children's movie. And NO, we do not have that allegory the other way around -- the election came after that movie, and just like the movie, it was a repudiation of communism. You remember all the communism in that cartoon, right?

What's more, Lots-o'-Huggin' Bear promises the toys that they are entering a better societal model than the old-fashioned family, one that is free, especially, from the grief of ownership. "No owners means no heartbreak," the bear says. "At Sunnyside, we own ourselves." Maybe he should've thrown in something about redistributing wealth and taking over the means of production, but it's a kid's movie, so never mind.

The "ownership" in question was actually what these toys (God, why are we even devoting brain cells to this?) experienced before. They previously lived under a dictatorship. A rather benevolent dictatorship, sure, but they were forced to do whatever their child wanted. (Really, why? Why are we doing this?) The daycare facility at first seemed like a democratic utopia, but it turned out to be an oppressive authoritarian regime supported by a small elite class of officials. (SO DUMB.) In fact, if you really want to delve into the political philosophy, this situation...No, we can't keep doing this.

Anyway, this movie was also great because it teaches children that "sissified men" are not to be trusted and are trying to destroy our democracy! Sure! Fags ruin everything, kids! That's a lesson!

And we know America loved this anti-Obama, anti-gay movie because it did so well at the box office. Unlike every single one of Andrew Klavan's movies. [LA Times via The Corner]