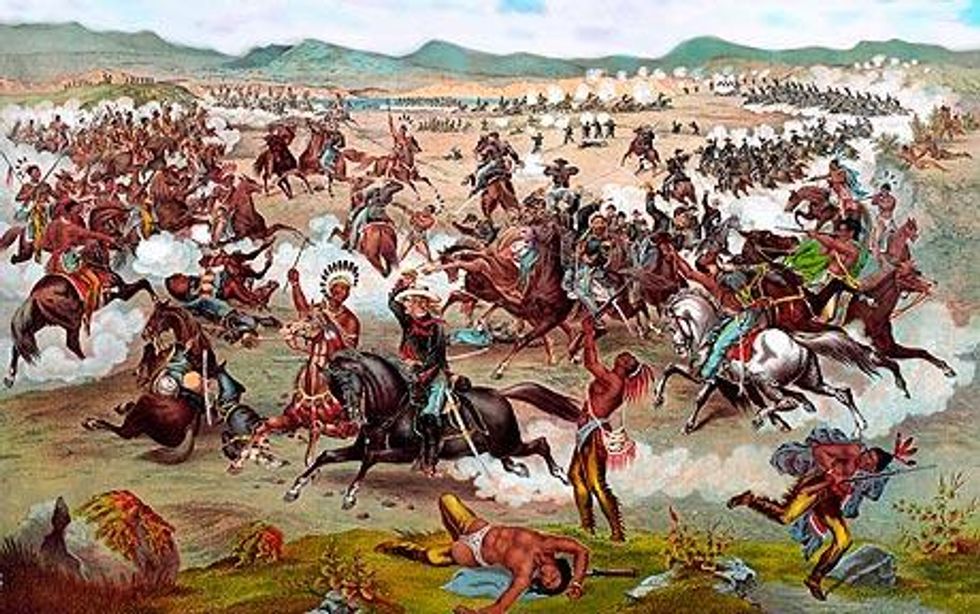 Want to catch up on Senator Staple-Crotch dealing a death-blow to his "nice guy" image? Previous debatingshere and here. (That second link is if you want to relive Third Man David Gregory finally succeeding in breaking your Wonkette, reducing us to a puddle of Tea Partyish rage. Your Editrix's mother thought it was great!) Now turn on your Span, let us blog like a wild thang!

7:02 PM -- Moderator: "Elizabeth Warren, I am a giant Communist or I would not be asking a question about Poors and Browns." Have no idea what Warren is answering as she is super fucking PILFy tonight. Seriously, ROWR!

7:05 PM -- Scott Brown is dropping names of random stores and restaurants in "real world" Western Mass, but we are not listening because DUH, SCOTT BROWN. But what is up with this black background, like they are performing Cabaret or Brecht? Oh, here is Brown, ME ME ME, blah, took a page from the Romney school of I WILL TALK NOW!!!

7:07 PM -- Have you ever heard the weird dirgey original of Brecht's "Whiskey Bar"? We expect Marianne Faithfull to show up any second and start singing "Surabaya Johnny."

(Sorry, Ute Lemper doesn't embed, and Marianne Faithfull can't be seen on Youtube or in daylight, but Bette's isn't bad!)

7:11 PM -- Oh, we were too busy looking up youtubes of Brecht and Weill and shit to be WATCHING WHAT HAPPENS LIVE as some lady boos Elizabeth Warren for saying we should have Obamacare ... like they have in Massachusetts.

7:14 PM -- Now that we think about it, "Whiskey Bar" was probably Kurt Weill, not Bertolt Brecht. We apologize for the (probable) error.

7:18 PM -- We are already behind, due to Brecht-tubing, and now Scott Brown is just lying Romney-styley. Soon we will be even more behind as we go downstairs to dish up some goddamn peppers and onions, since none of you came over to grill us a cheese. BUT SERIOUSLY, who is this one crazy female person who shouts BOOOOO everytime Warren is talking? She sounds deranged, and we would like to see the Span cameras swivel around to see her ejected.

7:22 PM -- Oh right, we forgot: Brown tried a Reagan "There you again," but sadly could not stick the landing. He's a st-st-st-stuttering fool. Maybe he is not used to the altitude?

7:24 PM -- Who's this Time Nazi, anyway? And why is Scott Brown listening to him? You think Romney would stop talking in the middle of a sentence because a clockwatcher interrupted him with "It's time"? WHY IS SCOTT BROWN SUCH A PUSSY, HENGGHHHH?

7:31 PM -- Never get involved in a landwar in Asia, and also apparently don't get into a debate with Elizabeth Warren unless you've got David Gregory gently cupping your scrot. Girl points out that study cited by Brown was conducted by group that called Ted Kennedy "Public Enemy No. 1." They might as well have gone on Saturday Night Live and torn up a pic of the Pope.

7:35 PM -- It's a fairly straightforward difference, investing in education and infrastructure, or making sure no one ever pays a cent in taxes unless they go to Halliburton and KBR. Brown is going after personal attacks against Warren and whether or not she's actually been a secret Plutocrat Lackey this whole time. She never responds; it's beneath her, and she's laid it all out already. Rather than looking evasive, though, she just looks like not taking the bait. The boos are landing on both sides now.

7:36 PM -- HO SNAP, Brown tries to take credit for Dodd-Frank, and Warren's all, hi, Boston Globe story that says you secretly worked to weaken it first. SERIOUSLY MODERATOR STOP WITH THE CLOCKINESS. "Senator, I owe you five seconds" IS A RIDICULOUS THING TO SAY.

7:41 PM -- Scott Brown hasn't mentioned his truck yet, has he, or marrying a Waltham girl? How are we supposed to get drunk?

7:43 PM -- B. Barry Bamz needs to put Warren on his payroll as his debate coach. Girl is on fire -- and yet "polite"! No charge goes unanswered (well except those ones we said before) and she lobs plenty of her own, none of which is pathetic and/or irrelevant.

7:48 PM -- Scott Brown will not pit Catholics against their Church and their faith. Obviously! Tie goes to the Church and the faith instead of to the Catholics (all of whom love birth control like it is a bottle of rye)!

7:49 PM -- Scott Brown is sticking with Elena Kagan -- former Solicitor General of the United States -- had no courtroom experience. Got it.

7:54 PM -- Sorry, we sort of dozed off during this foreign policy/the US Military is the greatest in the history of the world part. That's on us.

7:57 PM -- Did they finally eject that booing lady? We haven't heard her in at least 4 minutes? SADFACE.

8:00 PM -- Elizabeth Warren going on about her grandchildren just makes us think of what a Sexy Grandma should be: that's right, not this classy lady with her cool purple (?) suit and her pretty eyes and hair, but the incomparable governor grifter Sarah Palin. Now that's a spicy meatball!

8:05 PM -- Well, nobody fell in love tonight, unless it was you with the sexy librarian! Better luck next time, Scott Brown.