Andrea Mitchell Is Why We Can't Have Nice Things 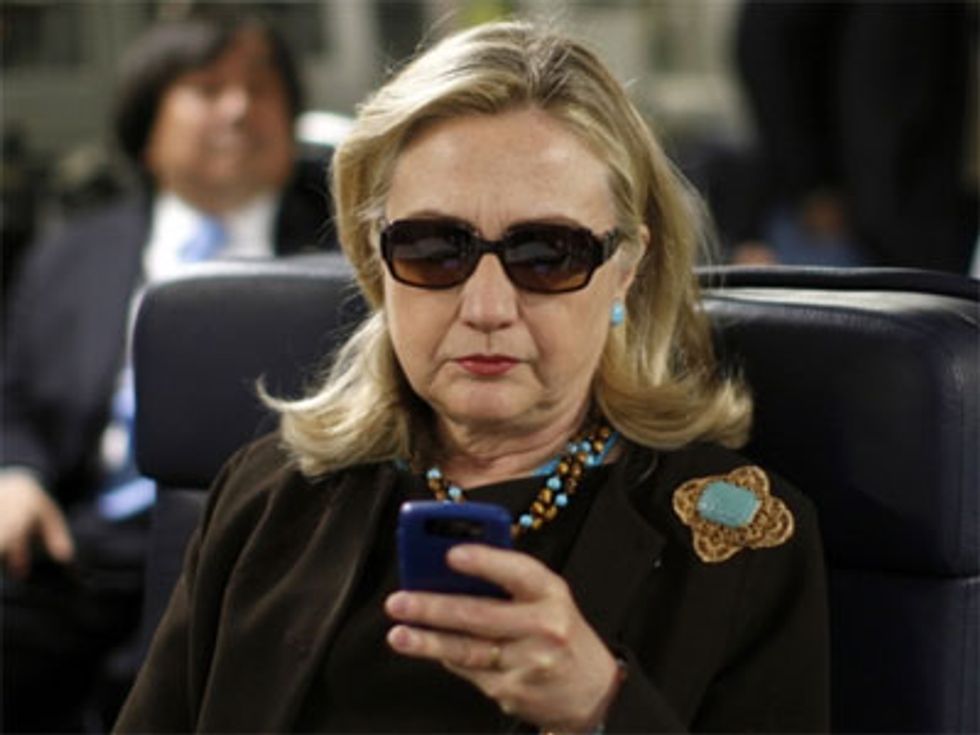 We are not going to make all the jokes about Andrea Mitchell's typo. Yes, it is awkward that she misspelled "awkward," but we imagine even she knows how the word is correctly spelled. We all make typos on Twitter, and usually, they're in otherwise brilliant tweets (not in this case, of course), and it makes you want to hit your head against something hard because WHY OH WHY did you have to spoil your own wit with a typo? It happens, right? Bqhatevwr.

What exactly is Andrea Mitchell trying to accomplish? Perhaps the former first lady and senator and secretary of state and potentially future president will be baited into some sort of Twitter fight? Or perhaps she'll simply be so overwhelmed by the mere existence of Monica Lewinsky -- ON THE INTERNET -- that she'll go into permanent seclusion, abandon any plans she might have had about running for office again, and eat all the Häagen-Dazs while she tearfully sings "I Will Survive"? This, finally, Monica Lewinsky's presence on Twitter, will be her undoing?

Really? REALLY? All these years, Hillary Clinton's kept a pretty tight lip about the woman who blew her husband in 1998, but now that she's been asked, there are probably a million things she's dying to say on national television. If only some stalwart reporter like Diane Sawyer had thought to ask before.

We are well aware that as Hillary Clinton decides whether she will keep her high approval ratings, thank you very much, or throw herself again at the mercy of the Democratic Party and hope for a better outcome than in 2008, we will have to relive The Blowjob again. And again. And again. Sure, we might occasionally be distracted by the Fox News-generated conspiracy theories that she personally planned the Benghazi attacks. That she's lesbian lovers with her Muslim terrorist aide. That her ankles are too fat; her laugh is too abrasive; she cries too much and not enough; she's a leftwing radical trained by Saul Alinsky; she's a bloodthirsty hawk slightly to the right of Dick Cheney; her headbands were ugly; her pantsuits are still ugly; her daughter was once ugly; she refused to change her last name because she was a radical feminist; she ultimately changed her last name because she's an opportunist; she's a traitor to feminism; she's an extreme feminist; she's a bad wife; she's a bad mother; she's a bad human being.

Whatever one thinks of her politics, her past, her present, her presidential plans -- we can be pretty damned certain that she's said all she has to say on the subject of The Blowjob, and no one is going to make her crack. She can take it. She lived through congressional investigations into her husband's infidelities. She survived the headlines about his erections, about just where he inserted cigars, about how his semen stained the world's most infamous blue dress. She has heard every single sordid detail that Very Serious Journalists like Andrea Mitchell and Diane Sawyer churned out 24 hours a day at the time and still -- still! -- cannot let go.

She's never going to go on a Twitter rant about Monica Lewinsky. She's never going to look into the camera with her steely gaze and say, "Actually, yes, I'd love to tell you what a I really think about the woman who blew my husband." She's never going to satisfy the insatiable hunger of the media that will never forget the golden era of the tabloid internet, when Matt Drudge still ruled their world, when they got to feign shock that such things happened between adults, that they asked and polled and worried about how we'd tell the children, about how we'd ever be the same, about how our republic would ever recover.

The Very Serious Journalists, though, are worse. They like to pretend they are engaging in something noble, that they are somehow honoring that great fourth estate by informing the citizenry, by asking, by implicating, by reminding us that once upon a time, a president got a hummer from a lady who wasn't his wife.