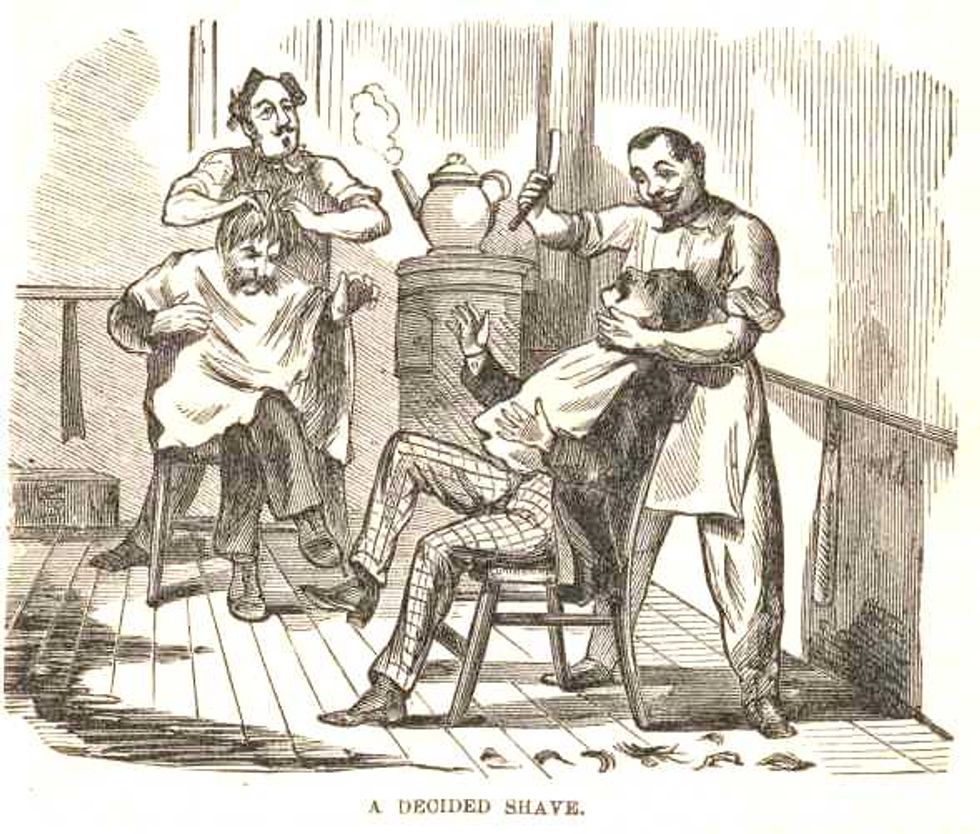 Listen: Andrew Sullivan can't find a good barbershop in New York City, and the bad beard trim he got yesterday is driving the poor man to despair of ever finding decent service in any business ever! Hisblog post about his terrible experiences at three NYC barbershops is a welcome contribution to a rich journalistic tradition of complaining about bad barbers that goes back at least as far as Mark Twain. Of course, thanks to institutional sexism, Margaret Bourke-White has never gotten proper credit for her epic 1938 rant about an incompetent bikini wax.

Sullivan begins his descent into tonsorial hell with a visit to "a Yelp-recommended, first come, first served joint" where the estimated wait of 30 minutes doubles, and then stretches to nearly two hours. He leaves. At the second place, he wanders into an episode of Curb Your Enthusiasm:

I asked if they had wifi so I could blog while I waited. They did, so I asked for the password. Instead of simply telling me, the owner asked me to hand him my iPad (to write it in himself), which he then dropped, causing the screen to shatter on the floor.

Instead of apologizing, he first asked -- I’m not making this up -- if the iPad looked like that before he dropped it. He then insisted I have it repaired by some dude he knew. I said I’d have it repaired at the Apple Store. He harrumphed. I had a thought they might waive the fee for the beard trim. This is New York City: no fucking way.

And when he finally does find his way into an actual barber's chair, at a place recommeded by a friend, the resulting butchery (do we get a photo? We do not) throws him into a fugue state:

The dude turned the beard into a lopsided brick. Aaron had to fix it later, and even now my head looks lop-sided. Maybe I’m just unlucky, but it amazes me that New Yorkers have such an attitude about good service when they are not in the city. Where do their expectations come from? This city has the worst service I’ve ever experienced.

We are then treated to a catalogue of the petty, maddening shoddiness that Andrew Sullivan must contend with in New York: crappy wifi, a building superintendent who never fixes a broken lock, and "even UPS (one of my meds was just 'found' on the sidewalk outside my apartment by a neighbor)." There's something in there about "pharmacists bound by Bloomberg’s nannying" that we didn't quite get -- perhaps Mr. Sullivan misses the good old 44-ounce cups of Lithium? In any case, New York is wearing him down:

you just find it harder to live here, even as you’re fleeced everywhere you move. The sidewalks almost suck the money from your pockets and give back attitude in return.

We worry about Andrew Sullivan, sometimes. But then we remember this awesome Ken Layne piece about Sullivan's election-year tweeting, with its useful reminder, "There are no small moments in Andrew Sullivan's online world...Everything means Everything, all the time." We're hoping Mr. Sullivan has a nice sandwich or something, so that the world will be fine once again.