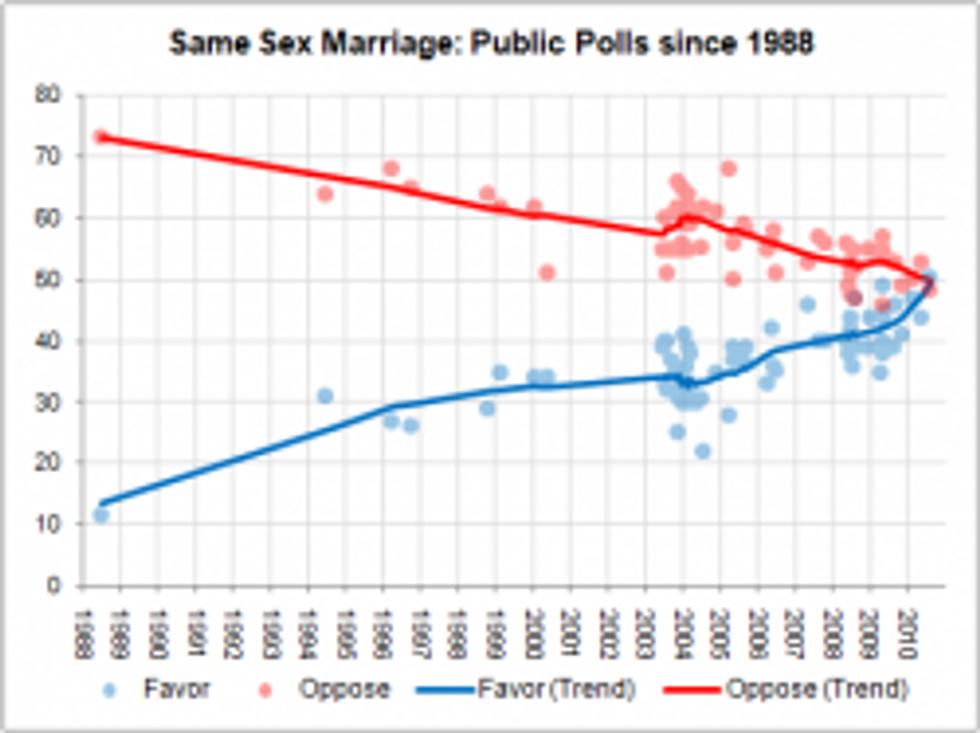 Neoconservativepot-pundit Andrew Sullivan decorated one of his recent posts, titled "Support For Marriage Equality Accelerating?", with this graph showing that Americans' support for same-sex marriage has increased since 1988 to more than 50%, while opposition to it has impotenced. But Paul Hipple, editor of the popular Dominionists for Tancredo/Palin 2012 blog, sees something more in Sullivan's illustration: "the shape of an engorged, fully erect male phallus, possibly of human origin."

Hipple says that the "phallus-shaped poll results" are the work of a conspiratorial cadre of "elitist lamestream media," pollsters, and poll respondents. The supporting evidence he provides is a list of tags that includes "Christmas-bait and switch tactics," "Climatologists crime spree," "Hidden turban bombs," "How to seek protection from race riots," "Vicious Border Dog Program," and "Witch-like Senators," among many(!) other topics that are seemingly unrelated to penises or penis-poll pictographs. Hipple's theory needs more work! But that doesn't mean he's wrong.

As for the phallus's "full" erectness: Your Wonkette is neither a structural engineer nor a sexpert, but those lines run horizontally, not vertically. (Oh wait -- if you turn your laptop counterclockwise, and put it on its side, then the lines run up and down/“erectly." Never mind.) And regarding its overall appearance, Hipple deems it to be "unattractive," possibly because it looks like a sharpened pencil or arrow or other type of maiming instrument.

Sullivan says that despite his Gay-Gay-Gay lifestyle and aesthetics, he didn't notice the pornographic nature of his poll picture until the Dominionists pointed out The Truth to him. But now he has, and is thankful. As for the Dominionists, they will now return to praying for Tom Tancredo/Sarah Palin victory, until another penis chart-conspiracy photo shows up on the Internet (in like two minutes, probably). [Andrew Sullivan at the Daily Dish/Dominionists for Tancredo/Palin 2012]