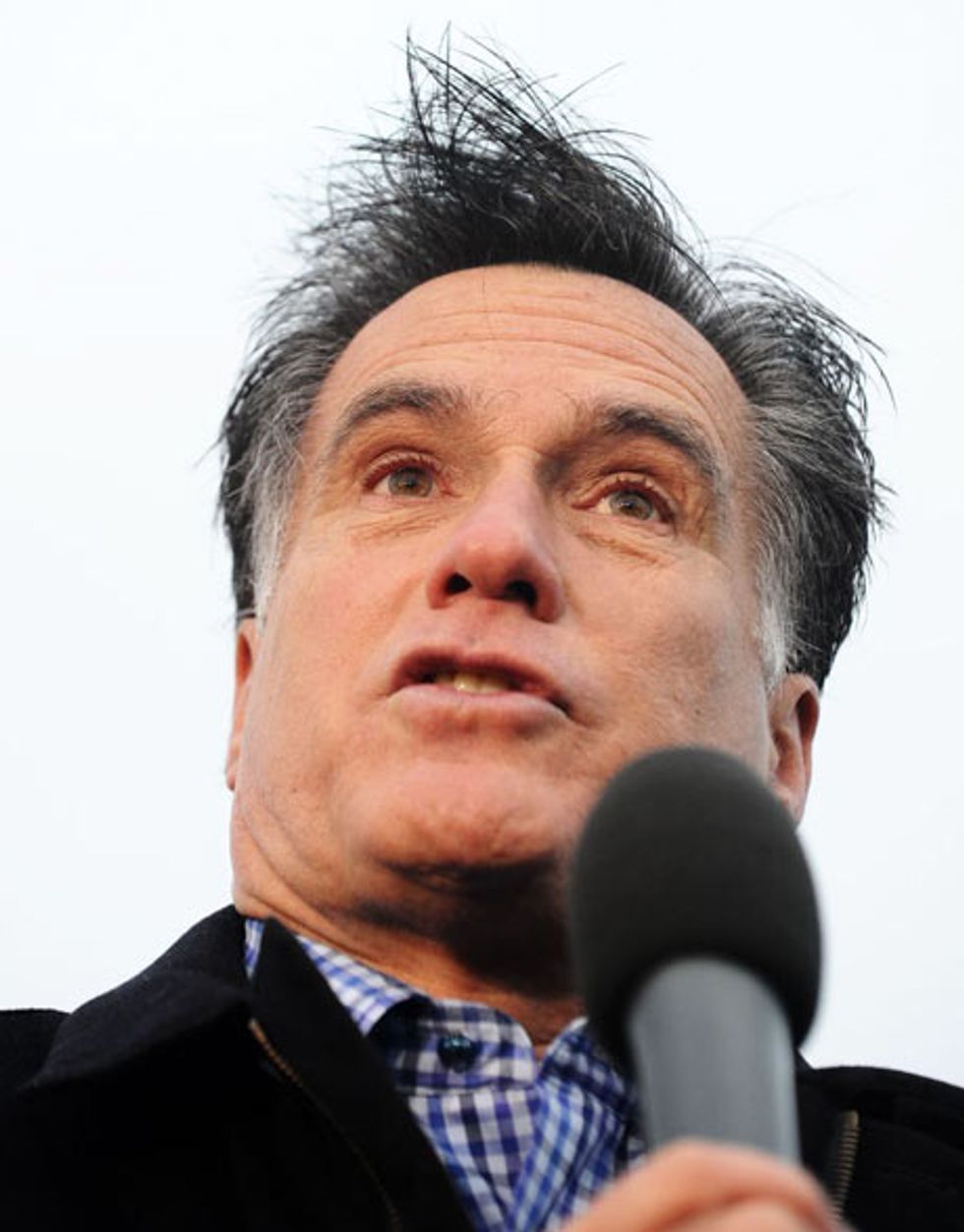 Mitt Romney is SO VERY SAD, you guys. All he wanted was to be President. That's it. He had a dream, just a simple dream, and You People crushed it. So now he spends his days alone, shuffling around in his $1000 bathrobes, talking to secret service personnel that aren't there. And Ann! This has been ESPECIALLY hard on Ann, who is Above all of this.

Are we bad people because we are kind of happy to learn that Ann Romney spends her days “crying softly,” trying desperately to adjust to a life filled with mansions and Austrian warmbloods instead of political events and secret service motorcades?

By all accounts, the past month has been most difficult on Romney’s wife, Ann, who friends said believed up until the end that ascending to the White House was their destiny. They said she has been crying in private and trying to get back to riding her horses.

Ha! Ha! Ha! So the joke is on You People, who will just have to find a way to live with the fact that you robbed Mitt of his destiny.

Four weeks after losing a presidential election he was convinced he would win, Romney’s rapid retreat into seclusion has been marked by repressed emotions, second-guessing and, perhaps for the first time in the overachiever’s adult life, sustained boredom, according to interviews with more than a dozen of Romney’s closest friends and advisers… Romney hangs around the house, sometimes alone, pecking away at his iPad and e-mailing his CEO buddies who have been swooping in and out of La Jolla to visit.

Oh and that picture of Mitt pumping gas and looking like who did it and ran? Don’t worry, that is not part of the thing where he is bored and confronting the banality of affluence for the first time in his adult life, and mourning the disappearance of a special servant to make peanut butter honey sandwiches. No, he just looks like that all the time, which is kind of worse in a way, and also makes us happy because (as established) we are bad people.

Friends say a snapshot-gone-viral showing a disheveled Romney pumping gas is just how he looks without a suit on his frame or gel in his hair.

Mitt has “friends,” did you know that? And they're such good "friends" they're happy to confirm to the Washington Post that yes, Mitt really does look exactly like he looks in that horribly unflattering picture, so that was nice of them. Oh and the Romney Thanksgiving? Since you asked, of all the sons he could have invited to come home for Thanksgiving, Mitt picked the scary one, Josh. Then Mitt and Ann and Josh and Josh's wife and their four kids all ate dinner in the bedroom of a Spanish villa. Or maybe they all slept in the one bedroom together for some reason, which sounds weird also. Either way, the whole thing sounds weird.

Over Thanksgiving, one of Romney’s five sons, Josh, his wife and their four children packed into a single bedroom at the Spanish-style villa on Dunemere Drive here. One friend said they ordered their turkey dinner from Boston Market, the home-style restaurant chain, because there were too many kids running around the house to bother with cooking a feast.

And: four kids? FOUR kids and they couldn’t bother cooking a dinner? Okay, that's fine. You don't have to cook Thanksgiving dinner, and fuck the patriarchy that says you do, Ann! But Boston Market? That's how you know Ann is really depressed. Anybody else get the feeling she never came out of her master's suite at all and finally someone was like "we better order some Boston Market"? Are Mormons allowed to pop Mothers Little Helpers?

Anyway, poor Mitt and Ann. Poor, sad, Mitt and Ann, having to nurse their wounds with their hundreds of millions of dollars. And probably pills, we are just guessing.