Ann Coulter Threatens To Give Up And Write Cookbooks And Mysteries If Trump Loses! Oh No! 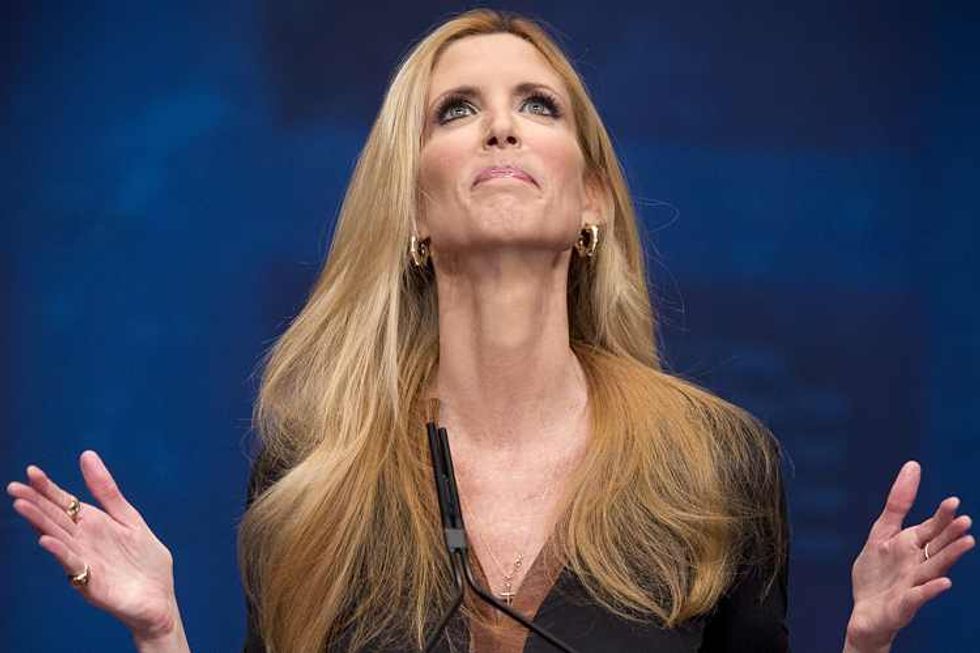 Just a week or so ago, we brought you the tragic news that if Donald Trump loses this election, that Duck Dynasty Idiot Phil Robertson would give up on everything and go into hiding. Which, of course, would be tragic. Now we must bring you news that may have you reconsidering your Clinton vote altogether -- and that is that if Trump loses, we may also be in danger of losing national treasure Ann Coulter. What next, God? Who will you take from us next?

In an interview with the Washington Examiner this weekend, Coulter announced that if Trump lost this election she would give up her dream of opening up the Hellmouth so that she may return to her original demon dimension, or whatever it is she is trying to do. Because all will be lost, and the liberals will have won, and we'll let all the immigrants and the Syrian refugees in, and the Republicans will never be able to win an election again.

Sure! Right now you are thinking "How will we ever go on? Who will bring the sunshine into our lives, if not Ann Coulter!"

However -- there could be an upside here. Coulter says her plan, in the event that Trump is defeated (which, thank Nate Silver, there appears to be a very good chance of again) -- she will take up writing cookbooks and mysteries. And I think that is a thing we can all look forward to. Perhaps she will share her recipe for the kind of gruel she had hoped to serve in the children's workhouses! Or write a mystery about a quirky 1970s comedian who fakes his own death only to return as a blonde Conservative firebrand? The possibilities are endless!

Coulter also shared some deets about her new book about Trump, which she says will prove that all the things even she thought were his disadvantages were actually all advantages. BECAUSE HE IS MAGIC! And has literally no flaws or disadvantages at all! Like, not even his mouth and the fact that terrible things come out of it rather continually! This will all be very awkward should he lose the election. Which we are very much hoping he will, even if it means never seeing Ann Coulter again.