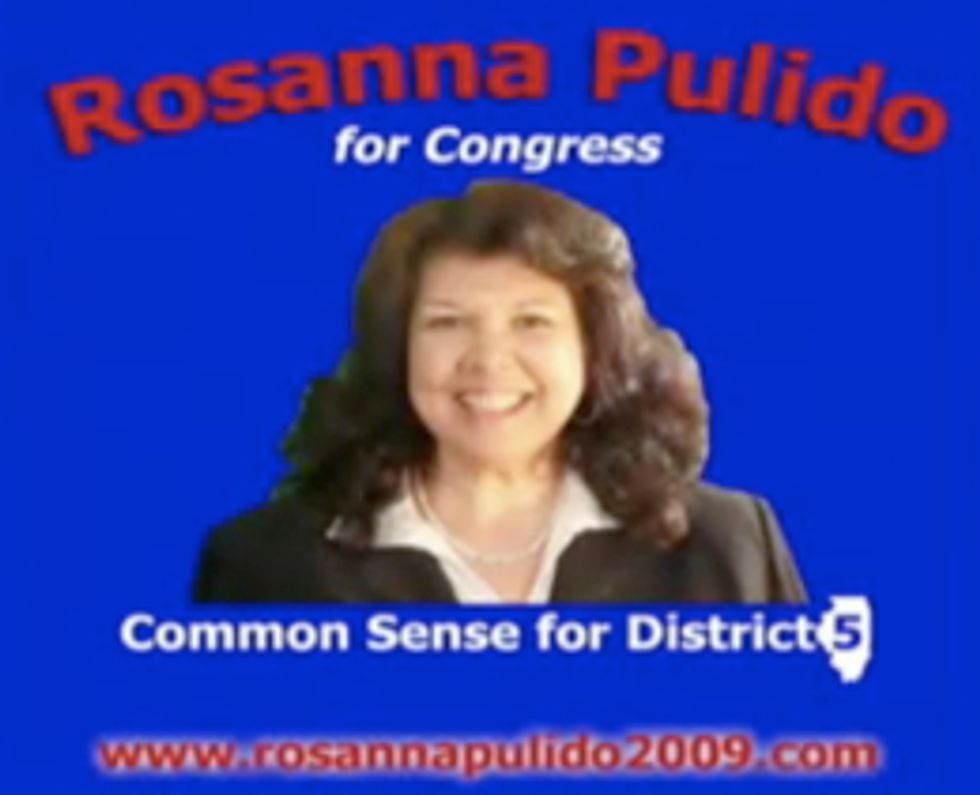 In early March, a gal named Rosanna Pulido won the Republican primary for the upcoming special congressional election in Illinois' District 5, Rahm Emanuel's former kingdom. She will lose. But not before making the funnies! She was thefounder of the Illinois chapter of the Minutemen, because she *hates* the Mexicans. Once in a CNN interview she described John McCain as "just another politician that acts as if he was elected to represent the Mexican government." Well maybe he was! AND YET, her mostdelightful comments came under the name "chicagolady" on the Free Republic website, where she wrote hilarious racist blather for five years until being recently outed.

While it would be quite unusual to say that Pulido likes black people, they are her de facto allies in the more important battle against the Mexicans, who have a secret plan! As "chicagolady" wrote last October,

The TRUTH is, Obama will legalize 12-20 million ILLEGAL ALIENS, and THUS SELL THE BLACKS, His own Race BACK into slavery!

The Illegals coming over pretty much hate African Americans.

He is going to unleash REAL racism upon his own people as they fight for jobs with the illegal aliens.

It has already happened in LA, just ask Ted Hayes!!

Ha ha, who else said this?: "The Illegals coming over pretty much hate African Americans." Mark Penn!

Also, the housing bubble was caused by Mexicans giving Mexican money to other Mexicans as a "diversion" for the upcoming War on Blacks.

Thanks for posting and verifing what we we thinking. BUT you missed something! A lot of those loans were made by Mexicans preying on Mexicans. Not white Americans preying on Mexicans. What is being exposed here is a diversion created by the Hispanics who want money at any cost and the corruption and culture they are bringing with them. They would sell swamp land in Florida to their own grandmother.

I lived in Mexico for a year as a missionary. I was ripped off the worst by the Bible students. It is so cultural to rip people off they do not see that it is wrong. It’s culture.

Oh and she hates the Muslims too, but probably only because she thinks they're Mexicans. Here she jokes about how funny the Muslims look when they pray to their Mexican God:

It reminds me of my dog, smelling buts.

Official Republican nominee for Congress, everyone!