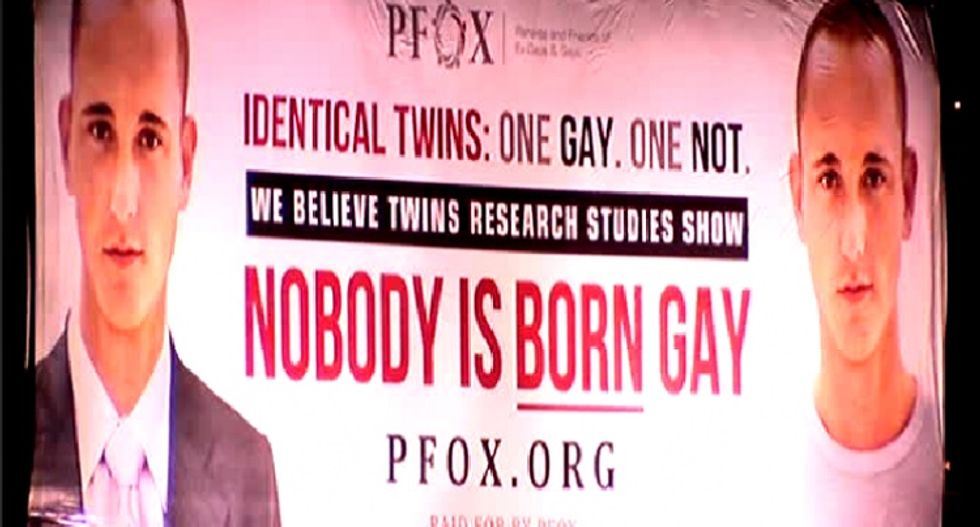 An idiot "ex-gay" group calling itself Parents and Friends of Ex-Gays & Gays (PFOX) -- get it?!? -- put up a billboard claiming that studies of twins "prove" that no one is born gay, because if one twin is gay and the other is straight, then it's UNPOSSIBLE for anyone to be "born gay." You know, because science.

Never mind that billboards are not actually a valid form of peer review, or that twin studies also show that in about 21% of cases, one twin is left handed and the other is right-handed (in fact only about 4% of twins are both left-handed). This is about propaganda by stock photo, and about the inconvenient detail that the "identical twins" in the billboard are actually just two photos of one guy, a South African model named Kyle Roux. Oh, and also, Mr. Roux isn't a twin, but he is gay, and quite happily so:

“I was obviously quite shocked, so that why I decided to send you guys an email saying hey, I’m that guy in that billboard,” he wrote to Channel 12 [in Richmond, Virginia].

Roux sat for the photo-shoot a decade ago and hadn’t thought much of it since. The images were for a stock image service. He said he was told they’d be used for corporate advertising and publicity materials.

“It just seems like there no place in today’s world for an organization that is promoting this as being some kind of deviant or distasteful lifestyle, because I’ve lived my life openly gay and happy for my entire life,” Roux said.

Mind you, the billboard people think they've really scored a science zinger anyway, because the point is not the stock photos, but science, which is definitely on their side, except for how it isn't. Some twin studies actually suggest the opposite of what the bigots of PFOX (so clever!) claim -- identical twins tend to have a higher likelihood of both being gay or lesbian than other siblings -- but as of yet there's no consensus on the degree to which sexual orientation is the result of biological predisposition.

The only real consensus, straight and gay, is that the billboard dude is smokin' hot, and should clone many more of himself with the fine Adobe product of his choice.