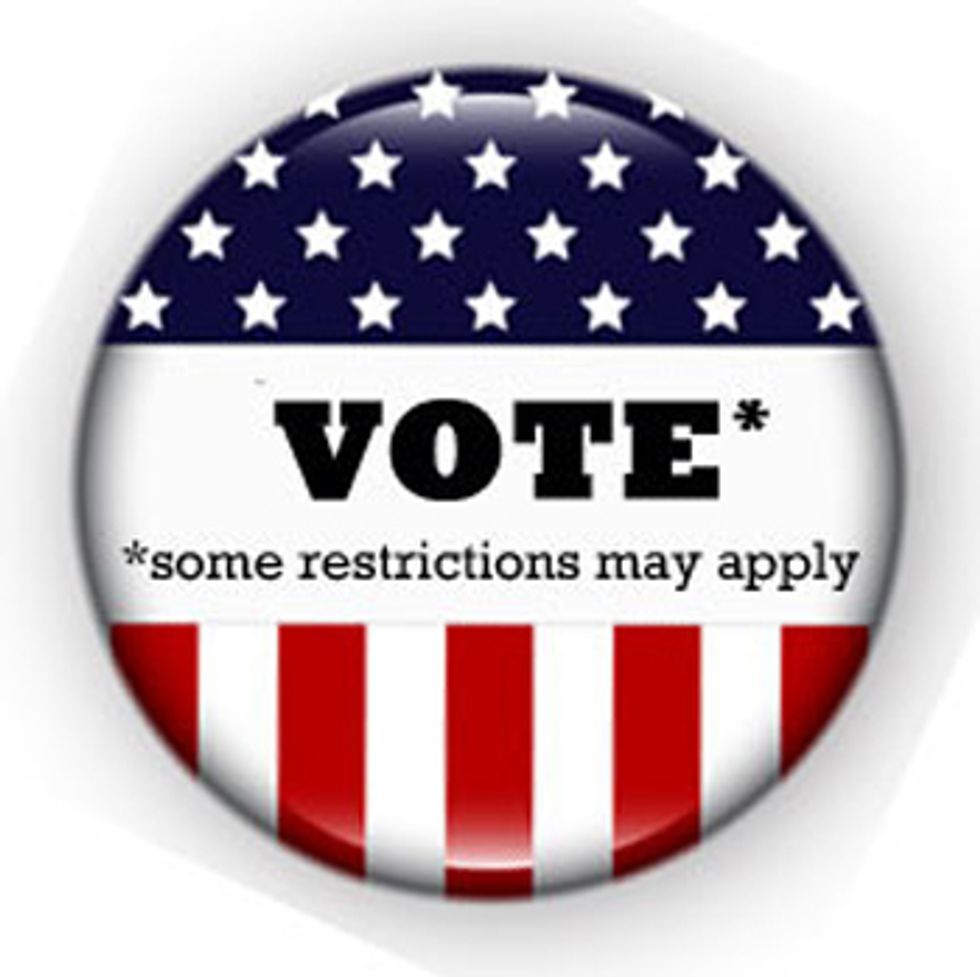 How's this for timing? Just one day before the 50th anniversary of the Voting Rights Act, a federal appeals court struck down Texas's awful Voter ID law. The three-judge panel ruled that the law discriminates against blacks and Hispanics by making voting much harder, but -- sorry, people who'd like to maybe vote -- it also leaves the law in place, though unenforced, while sending it back to a lower court to reconsider. So at best, it's a kinda-sorta victory, and it's likely that Texas will appeal the decision, because Texas is completely over voting rights, which are such a relic of the 1960s, they may as well be wearing bell bottoms and a peace symbol.

Not surprisingly, Gov. Greg Abbott was aghast, and promised to make sure that all those fraudulent 101-year-old ladies will be kept from voting:

“In light of ongoing voter fraud, it is imperative that Texas has a voter ID law that prevents cheating at the ballot box," he said in a statement.

Yes, so much fraud everywhere. Roughly 31 alleged cases of in-person fraud nationwide between 2000 and 2014, according to one researcher. Never mind that most vote fraud has nothing to do with voters impersonating someone else. As Loyola University law professor Justin Levitt says, that's a "slow, clunky way to steal an election. Which is why it rarely happens." On the other hand, Texas's ID restrictions -- you must provide a driver’s license, a U.S. passport, a concealed-handgun license or a voter identification card issued by the state Department of Public Safety -- keep voting out of reach of roughly 600,000 Texans, mostly minorities, the elderly, and the poor, who often lack access to the background documents needed to get the photo ID. So you can see why Abbott thinks it's so important to make sure only the right people are voting.

The Fifth Circuit Court of Appeals panel sent the decision back to the lower court "because illegal intent to discriminate had not been established," and the legislators who passed the law "declared an interest in preventing voter fraud." (And we all know those Texas legislators would never support a discriminatory law while pretending it was for some other, noble purpose.) The panel further recommended the state "seek ways to alter the voter law short of overturning it entirely. The state could, for example, reinstate the acceptance at the polls of certain forms of identification that may be more easily available."

From here, Texas has several options: It could wait and let the district court reconsider the case (unlikely since that court has already gone against Texas); it can ask the full Fifth Circuit to hear the case; or it can appeal directly to the U.S. Supreme Court, which started the whole mess in the first place when it gutted the Voting Rights Act in 2013.

So yay, it looks like more old ladies can look forward to giving up their rights because they were foolish enough not to keep a copy of their 1913 birth certificate in a safe. Wouldn't want any fraud happening, even if the price is half a million otherwise eligible voters being kept from the polls.