Are Christian Textbooks Teaching That The Moon Landing Was Fake? We Are Only Asking. 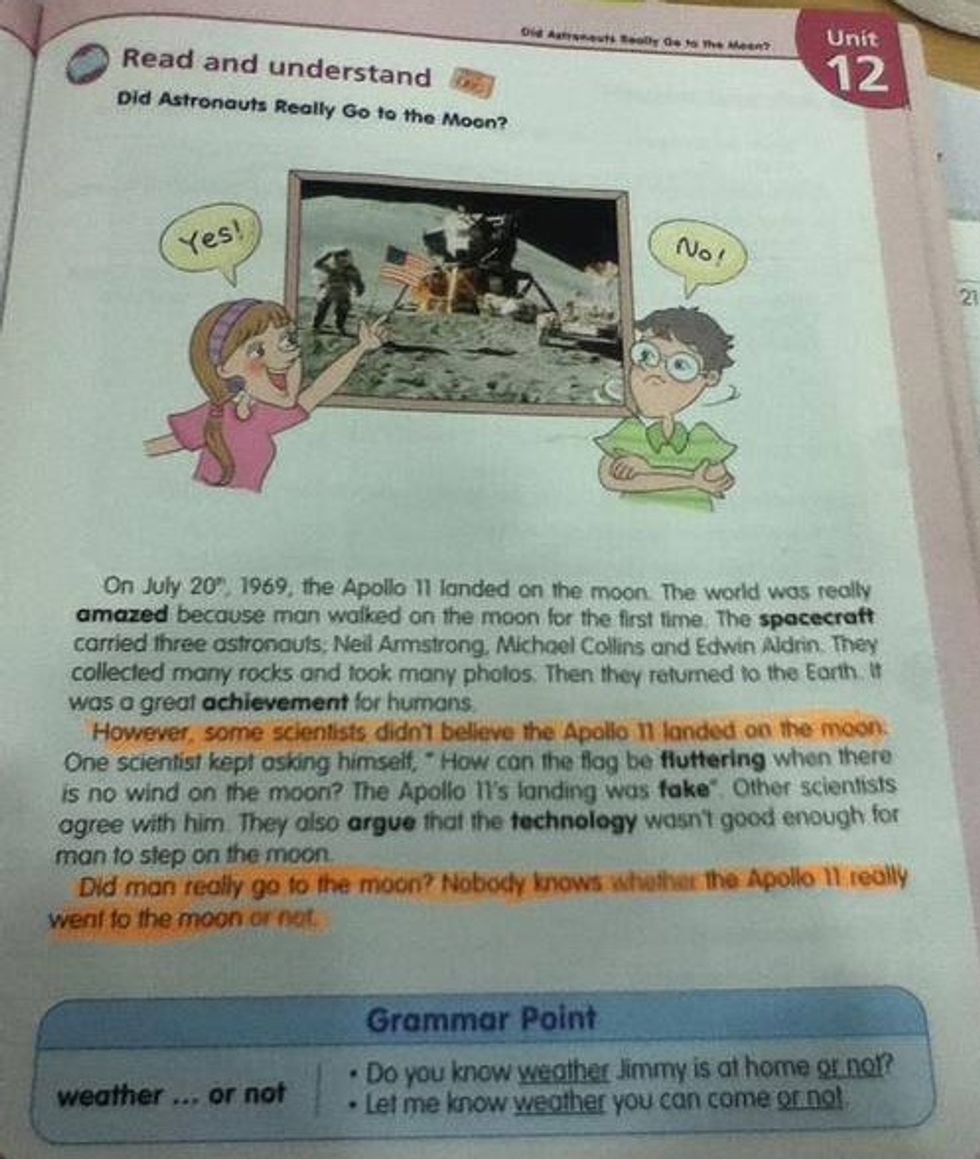 Well here's a head-scratcher, courtesy of John Prager atAmericans Against the Tea Party: a photo of a textbook that asks kids what they think -- did astronauts really go to the moon? Prager found this image on the interwebs and recalled it as something very similar to what he'd been taught as a child in a small Christian school using textbooks from A Beka and ACE. While Prager's not 100% sure of the source of this unidentified textbook -- it's also been described by another blog as "an English textbook from South Korea" -- he does say that he remembers

something similar from my time in Christian school. It is possible that this is A BEKA, but I am not certain if this is the exact material with which I suffered in my childhood, but this does accurately represent what is taught.

But why should anyone worry about this sort of thing? Like any number of creationists, it's simply encouraging elementary school kids to apply their critical thinking skills to a question about which lots of people, even scientists, disagree.

“On July 20th, 1969 the Apollo 11 landed on the moon. The world was really amazed because man walked on the moon for the first time. The spacecraft carried three astronauts, Neil Armstrong, Michael Collins, and Edwin Aldrin. They collected many rocks and took many photos. Then they returned to the Earth. It was a great achievement for humans.

However, some scientists didn’t believe the Apollo 11 landed on the moon. One scientist kept asking himself, “How can the flag be fluttering when there is no wind on the moon? The Apollo 11′s landing was fake.” Other scientists agree with him. They also argue that the technology wasn’t good enough for man to step on the moon.

Did man really go to the moon? Nobody knows whether the Apollo 11 really went to the moon or not.

It really is exactly the sort of "teach the controversy" approach that creationists advocate: that science stuff is just so iffy, and not everybody buys it, so isn't it fair to teach both sides? And this is a pretty good example of how evolution would be handled in a "teach the controversy" text: with a nod to what most people call reality, but with all the details weighted to the cranky "alternate theory." Nobody knows whether Apollo 11 went to the moon or not.

We sure would love to see some enterprising reporter ask Texas's Republican candidates for Lieutenant Governor whether they think that the moon landing or the Holocaust should get the same "teach both sides" handling in Texas schools. This isn't teching critical thinking -- it's teaching that science can't be relied on and that the world isn't really knowable (except, of course, through the Bible). As Prager notes, when he finally escaped the fundamentalist-school cocoon he'd been in from third through ninth grade,

For what it's worth, the nice folks at Creation Ministries International do not think that it's a good idea to cast doubt on the moon landings, since there were multiple eyewitnesses (just like with Jesus's resurrection), and astronaut James Irwin walked on the moon, and he was a creationist. Sure he was. As they say at the wiki, [citation needed].

Also, too, we really wish that this photo had come with more identification -- the internet is supposedly great at crowdsourcing searches for that kind of detail, but so far, all we know is that this is either a Christianist textbook, or maybe a South Korean English textbook that's very similar to what can be found in some such texts. That "Grammar Point" at the bottom makes the "South Korea" hypothesis seem maybe more likely. We may never know weather it's Korean or American. Hey internet, document your sources, mmmkay?