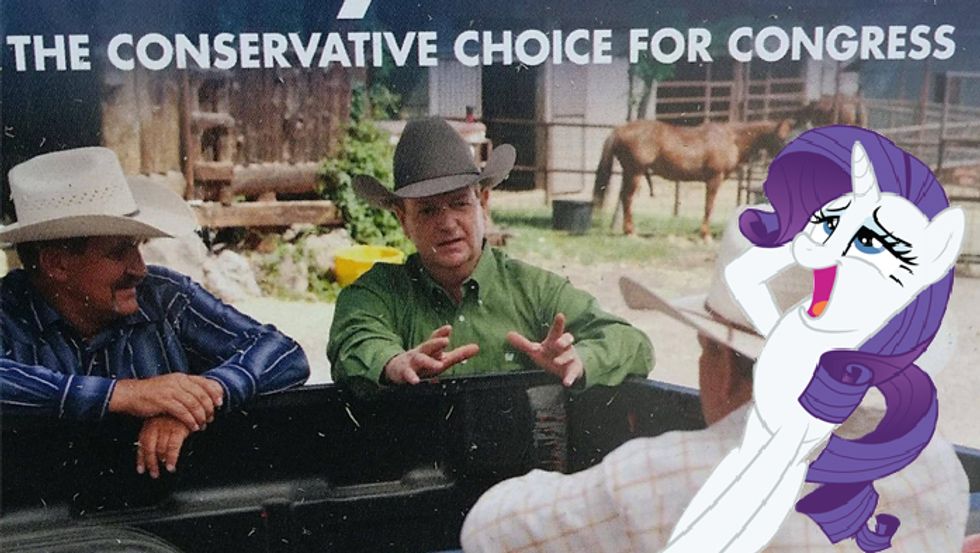 In a midterm election that's featured Joni Ernst winning the Iowa Senate primary based on her professed expertise atcastrating pigs and Thad Cochran reminiscing about his boyhood adventures in molesting animals, it's probably no surprise that Arizona teabagger Gary Kiehne recently mailed out a campaign flyer with a very happy stallion in the background, much to the delight of the goofballs on Reddit, because duh, horse cock.

Mr. Kiehne is running on a platform of guns, ammo, and also a few more guns, and first came to Yr Wonkette's attention back in May, when he confidently claimed that 99 percent of mass shootings were committed by registered Democrats. He later apologized, so no harm, no foul, right?

After the Tucson Weekly called attention to the horse dick Monday, the story has gone national, because it's August, and with a week like we've been having, who could possibly resist a refreshing horse peen story? For "context," and another chance to say "horse penis," here's a shot of the full flyer:

As of yet, the Kiehne campaign doesn't appear to have commented on the horse wiener ad; Arizona's primary election is August 26, so it's not known whether the monster horse dick will hurt his chances. Let's just remember that this IS Arizona we're talking about, after all. If Kiehne were running in Enumclaw, Washington, he'd probably have put the horse in the foreground.

[Tucson Weekly via Crooks and Liars]