Arizona Hopes To Out-LePage Maine, Screw Poors Harder Than Any Other State 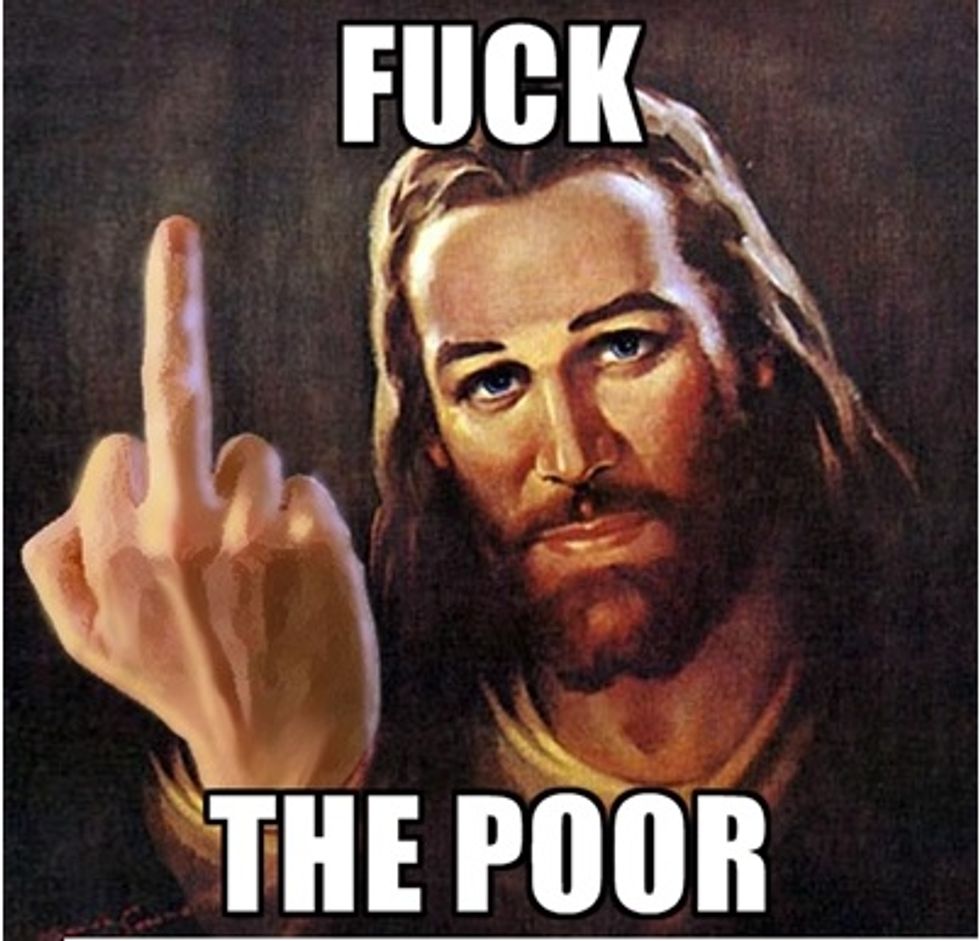 A year is plenty of time to stop being poor.

Clearly tired of Maine Gov. Paul LePage and Florida Gov. Rick Scott getting all the Koch brothers handjobs for their wars on the Poors, the great state of Arizona now has the nation's strictest limits on cash assistance to poor families with children, hooray! The new law, passed in 2015, sets a one-year lifetime limit on such aid, and went into effect Friday. As everyone knows, the best way to encourage people to not be poor is to take away government assistance, and then they all stop being poor. This is common sense.

The one-year lifetime limit immediately cut off the already small stipends -- an average of $278 per month -- for about 2,500 people, of whom 1,500 are children.

The limits were passed by the legislature and signed by Gov. Doug Ducey last year when the state was experiencing a budget crunch, and since kicking poor people is always a popular move, the proposal to cut the Temporary Aid to Needy Families program passed easily. Funny story about that budget crisis:

since then, state coffers have rebounded and, this year, lawmakers faced a modest surplus. Despite that, proposals from Democrats and advocates for the poor to keep the program at its two-year limit went unheeded.

Sounds like time for a tax cut to reward the job creators! Oh, and as for saving the state a bundle? Turns out the cuts, which were projected to save $9 million annually, only ended up saving $4 million. Funny how that happened.

Not everybody is rejoicing at the sudden elimination of poverty, like for instance the indolent poor and people who enable their leeching off productive members of society:

"Are you kidding me?" asked Darlene Newsome, who runs the UMOM shelter for homeless families. "Are they telling people you can only be extremely poor for one year in your life?"

Well, yes. If people can't stop being poor within a year, they're probably not motivated enough, so it's time to pull the plug and let them sink or swim. Besides, the families can still get food stamps so the kids can still experience the shame of being glared at in supermarket checkout lines. Builds character.

Some 1600 families were cut off as of Friday, although about 40 percent of them were able to qualify for a program which helped them find jobs. That still left about 930 families who didn't get into the jobs program and now have no cash assistance. Guess they'll have to stop living it up so much.

She predicted many would end up in shelters, which already are strained to beyond capacity.

Like several states, Arizona has in recent years been shifting federal funds designated for TANF to other programs which assist children, so it won't have to pay for those programs anymore. In 2007, 39 percent of the federal TANF grant went to direct assistance for families. The Legislature decided to cut state funding for Child Protective Services and shift the federal funds to cover those cuts, so by 2014, only 9 percent of Arizona's TANF funds actually went to cash for families, according to the Center for Budget and Policy Priorities. We bet if Arizona really puts its best minds into the effort, the state can find a way to prevent any Temporary Assistance to Needy Families funds from being wasted on needy families. They'd just blow the money on needless luxuries like clothes, school supplies, or toilet paper anyway.

Democrats attempted to restore the TANF time limit to two years in the 2016 legislative session, but were unsuccessful, because it's Arizona, Jake:

"The arguments about there not being enough money is not the real reason," said Sen. Katie Hobbs, a Phoenix Democrat and the co-sponsor of a bill that would have reinstated the two-year limit.

In her mind, it's ideologically driven: "That all government assistance is bad, that it creates dependence," Hobbs said.

Oh, but what about that jobs program? Surely it helps? You bet it does, if you overlook the fact that fewer than half the recipients cut off as of July 1 actually were placed in jobs. And the minor detail that a lot of those jobs were part-time jobs. But for those 1500 kids whose parents lost the already tiny cash support they had, there's still a ray of hope and motivation: If they work really hard and start a business someday, they might qualify for a chunk of the $138 million in new business tax cuts that Arizona also put in place effective the same day. Yeah, we thought we were joking about that, too, but it turns out Arizona actually did it.

Kids gotta have something to reach for, after all.